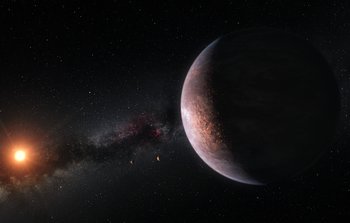 eso1805 — Science Release
TRAPPIST-1 Planets Probably Rich in Water
5 February 2018: A new study has found that the seven planets orbiting the nearby ultra-cool dwarf star TRAPPIST-1 are all made mostly of rock, and some could potentially hold more water than Earth. The planets' densities, now known much more precisely than before, suggest that some of them could have up to 5 percent of their mass in the form of water — about 250 times more than Earth's oceans. The hotter planets closest to their parent star are likely to have dense steamy atmospheres and the more distant ones probably have icy surfaces. In terms of size, density and the amount of radiation it receives from its star, the fourth planet out is the most similar to Earth. It seems to be the rockiest planet of the seven, and has the potential to host liquid water.
Read more
Showing 1 to 1 of 1
Usage of ESO Images, Videos, Web texts and Music