Subscribe to receive news from ESO in your language!
Search results for ‘releases with Facility used matching 'Next-Generation Transit Survey'.’ 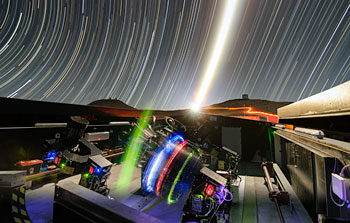 eso1502 — Organisation Release
New Exoplanet-hunting Telescopes on Paranal
14 January 2015: The Next-Generation Transit Survey (NGTS) has achieved first light at ESO’s Paranal Observatory in northern Chile. This project will search for transiting exoplanets — planets that pass in front of their parent star and hence produce a slight dimming of the star’s light that can be detected by sensitive instruments. The telescopes will focus on discovering Neptune-sized and smaller planets, with diameters between two and eight times that of Earth.
Read more
Showing 1 to 1 of 1
Usage of ESO Images, Videos, Web texts and Music