The ESO Educational Office Reaches Out towards Europe's Teachers

The European Southern Observatory (ESO) has been involved in many Europe-wide educational projects during the past years, in particular within European Science Weeks sponsored by the European Commission (EC). In order to further enhance the significant educational potential inherent in the numerous scientific endeavours now carried out by Europe's astronomers with ESO front-line telescope facilities, it has been decided to set up an Educational Office within the ESO EPR Department. It will from now on work closely with astronomy-oriented teachers, in particular at the high-school level , providing support, inspiration and new materials. Much of this interaction will happen via the European Association for Astronomy Education (EAAE).

In this context, and in collaboration with the European Space Agency (ESA), the first instalments of the "ESA/ESO Astronomy Exercise Series" have just been published, on the web (http://www.astroex.org) and in print (6 booklets totalling 100 pages; provided free-of-charge to teachers on request).

The European Southern Observatory (ESO), through its Education and Public Relations Department (EPR), has long been involved in educational activities, in particular by means of Europe-wide projects during successive European Science Weeks, with support from the European Commission (EC). A most visible outcome has been the creation of the trailblazing European Association for Astronomy Education (EAAE) - this was first discussed at an international meeting at the ESO Headquarters in November 1994 with the participation of more than one hundred physics teachers from different European countries.

Other educational projects include the highly successful "Sea and Space" (in 1998; with ESA), "Physics on Stage" (2000; with CERN and ESA), and "Life in the Universe" (2001; with CERN, ESA, EMBL and ESRF), all in close collaboration with EAAE.

Astronomy and Astrophysics at the frontline of education

The subject of Astronomy and Astrophysics plays an increasingly important role within education. This is not coincidental - this particular field of basic science is very attractive to young people. Its exploratory nature tickles youthful minds and the vast expanse of the Universe harbours many unknown secrets that are waiting to be discovered. The beautiful and intriguing images brought back by high-tech telescopes and instruments from the enormous terra incognita out there are natural works of art that invite comtemplation as well as interpretation.

Astronomy and Astrophysics is a broadly interdisciplinary field, providing ample opportunities for interesting educational angles into many different fields of fundamental science, from physics, chemistry and mathematics, to applied research in opto-mechanics, detectors and data handling, and onwards into the humanities.

In order to further enhance the educational potential of the numerous scientific endeavours now carried out by Europe's astronomers with ESO front-line facilities, it has been decided to set up an Educational Office within the ESO EPR Department.

It will from now on work closely with astronomy-oriented teachers, in particular at the high-school level, providing support, inspiration and new materials. Beginning next year, it will arrange meetings for teachers to inform about new results and trends in modern astrophysics, while facilitating the efficient exchange of the teachers' educational experience at different levels within the different curricula at Europe's schools.

These initiatives will be carried out in close collaboration with the European Association for Astronomy Education (EAAE). During the past months, various preparatory discussions have been held between ESO, EAAE members and other teachers involved in Astronomy teaching from many countries.

Provisional information about the ESO Educational Office will be found at its website (http://www.eso.org/outreach/eduoff/). One of the first activities is concerned with a survey of the specific needs for astronomy education in Europe's high-schools by means of a widely distributed questionnaire. Of more immediate use will be the publication of four, comprehensive astronomy exercises, prepared in collaboration with the European Space Agency (ESA) and further described below.

In the scientists' footsteps

The first instalments of the "ESA/ESO Astronomy Exercise Series" have just been published, on the web and in print. These exercises allow high-school students to gain exciting hands-on experience in astronomy, by making realistic calculations based on data obtained by some of the world's best telescopes, the NASA/ESA Hubble Space Telescope (HST) and ESO's Very Large Telescope (VLT). Carefully prepared by astronomers and media experts, these excercises enable the students to measure and calculate fundamental properties like the distances to and the ages of different kinds of astronomical objects.

Astronomy is an accessible and visual science, making it ideal for educational purposes. Reacting to the current need for innovative, high-quality educational materials, the European Space Agency (ESA) and the European Southern Observatory (ESO) have together produced this series of astronomical exercises for use in high schools.

The prime object of the series is to present various small projects that will transmit some of the excitement and satisfaction of scientific discovery to students. By performing the well-structured projects, the students also gain first-hand experience in the application of scientific methods that only require basic geometrical and physical knowledge. They use ideas and techniques described in recent front-line scientific papers and are able to derive results that compare well with those from the much more sophisticated analyses done by the scientists.

The first four exercises focus on techniques to measuring distances in the Universe, one of the most basics problems in modern astrophysics.

The students apply different methods to determine the distance of astronomical objects such as the supernova SN 1987A, the spiral galaxy Messier 100, the Cat's Eye Planetary Nebula and the globular cluster Messier 12 . With these results, it is possible to make quite accurate estimates of the age of the Universe and its expansion rate, without the use of computers or sophisticated software.

Students can also perform "naked-eye photometry" by measuring the brightness of stars on two VLT images (taken through blue and green optical filters, respectively). They can then construct the basic luminosity-temperature relation (the "Hertzsprung-Russell Diagramme") providing a superb way to gain insight into fundamental stellar physics.

The excercises are now available on the web (http://www.astroex.org) and in six booklets (100 pages in total), entitled

Each of the four exercises begins with a background text, followed by a series of questions, measurements and calculations. The exercises can be used either as texts in a traditional classroom format or for independent study as part of a project undertaken in smaller groups.

The booklets are sent free-of-charge to high- school teachers on request and may be downloaded as PDF-files from the above indicated website. More exercises will follow.

[1] This is a joint Press Release by the European Southern Observatory (ESO) and the Hubble European Space Agency Information Centre. The Hubble Space Telescope is a project of international co-operation between ESA and NASA. 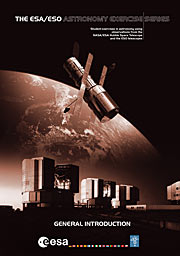