Scientists celebrate another major milestone at Cerro Paranal in Chile, home of ESO's Very Large Telescope array. Thanks to their dedicated efforts, they were able to create the first artificial star in the Southern Hemisphere, allowing astronomers to study the Universe in the finest detail. This artificial laser guide star makes it possible to apply adaptive optics systems, that counteract the blurring effect of the atmosphere, almost anywhere in the sky.

On 28 January 2006, at 23:07 local time, a laser beam of several watts was launched from Yepun, the fourth 8.2m Unit Telescope of the Very Large Telescope, producing an artificial star, 90 km up in the atmosphere. Despite this star being about 20 times fainter than the faintest star that can be seen with the unaided eye, it is bright enough for the adaptive optics to measure and correct the atmosphere's blurring effect. The event was greeted with much enthusiasm and happiness by the people in the control room of one of the most advanced astronomical facilities in the world.

It was the culmination of five years of collaborative work by a team of scientists and engineers from ESO and the Max Planck Institutes for Extraterrestrial Physics in Garching and for Astronomy in Heidelberg, Germany.

After more than one month of integration on site with the invaluable support of the Paranal Observatory staff, the VLT Laser Guide Star Facility saw First Light and propagated into the sky a 50cm wide, vivid, beautifully yellow beam.

Normally, the achievable image sharpness of a ground-based telescope is limited by the effect of atmospheric turbulence. This drawback can be surmounted with adaptive optics, allowing the telescope to produce images that are as sharp as if taken from space. This means that finer details in astronomical objects can be studied, and also that fainter objects can be observed.

In order to work, adaptive optics needs a nearby reference star that has to be relatively bright, thereby limiting the area of the sky that can be surveyed. To overcome this limitation, astronomers use a powerful laser that creates an artificial star, where and when they need it.

The laser beam, shining at a well-defined wavelength, makes the layer of sodium atoms that is present in Earth's atmosphere at an altitude of 90 kilometres glow. The laser is hosted in a dedicated laboratory under the platform of Yepun. A custom-made fibre carries the high power laser to the launch telescope situated on top of the large Unit Telescope.

An intense and exhilarating twelve days of tests followed the First Light of the Laser Guide Star (LGS), during which the LGS was used to improve the resolution of astronomical images obtained with the two adaptive optics instruments in use on Yepun: the NAOS-CONICA imager and the SINFONI spectrograph.

In the early hours of 9 February, the LGS could be used together with the SINFONI instrument, while in the early morning of 10 February, it was with the NAOS-CONICA system.

"To have succeeded in such a short time is an outstanding feat and is a tribute to all those who have together worked so hard over the last few years," said Richard Davies, project manager for the laser source development at the Max Planck Institute for Extraterrestrial Physics.

A second phase of commissioning will take place in the spring with the aim of optimizing the operations and refining the performances before the instrument is made available to the astronomers, later this year. The experience gained with this Laser Guide Star is also a key milestone in the design of the next generation of Extremely Large Telescope in the 30 to 60 metre range that is now being studied by ESO together with the European astronomical community.

High resolution images and their captions are available on this page. This press release is also accompanied by Broadcast quality material.

This press release is issued in coordination between ESO and the Max Planck Society. A German version is available at http://www.mpg.de/bilderBerichteDokumente/dokumentation/pressemitteilungen/2006/ 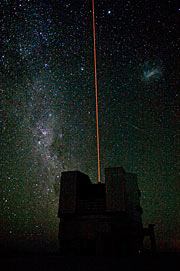 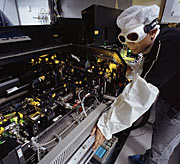