In its first Roadmap, the European Strategy Forum on Research Infrastructures (ESFRI) choose the European Extremely Large Telescope (ELT), for which ESO is presently developing a Reference Design, as one of the large scale projects to be conducted in astronomy, and the only one in optical astronomy. The aim of the ELT project is to build before the end of the next decade an optical/near-infrared telescope with a diameter in the 30-60m range.

The ESFRI Roadmap states: "Extremely Large Telescopes are seen world-wide as one of the highest priorities in ground-based astronomy. They will vastly advance astrophysical knowledge allowing detailed studies of inter alia planets around other stars, the first objects in the Universe, super-massive Black Holes, and the nature and distribution of the Dark Matter and Dark Energy which dominate the Universe. The European Extremely Large Telescope project will maintain and reinforce Europe's position at the forefront of astrophysical research."

Said Catherine Cesarsky, Director General of ESO: "In 2004, the ESO Council mandated ESO to play a leading role in the development of an ELT for Europe's astronomers. To that end, ESO has undertaken conceptual studies for ELTs and is currently also leading a consortium of European institutes engaged in studying enabling technologies for such a telescope. The inclusion of the ELT in the ESFRI roadmap, together with the comprehensive preparatory work already done, paves the way for the next phase of this exciting project, the design phase."

ESO is currently working, in close collaboration with the European astronomical community and the industry, on a baseline design for an Extremely Large Telescope. The plan is a telescope with a primary mirror between 30 and 60 metres in diameter and a financial envelope of about 750 m Euros. It aims at more than a factor ten improvement in overall performance compared to the current leader in ground based astronomy: the ESO Very Large Telescope at the Paranal Observatory.

The draft Baseline Reference Design will be presented to the wider scientific community on 29 - 30 November 2006 at a dedicated ELT Workshop Meeting in Marseille (France) and will be further reiterated. The design is then to be presented to the ESO Council at the end of 2006. The goal is to start the detailed E-ELT design work by the first half of 2007.

Launched in April 2002, the European Strategy Forum on Research Infrastructures was set-up following a recommendation of the European Union Council, with the role to support a coherent approach to policy-making on research infrastructures in Europe, and to act as an incubator for international negotiations about concrete initiatives. In particular, ESFRI has prepared a European Roadmap identifying new Research Infrastructure of pan-European interest corresponding to the long term needs of the European research communities, covering all scientific areas, regardless of possible location and likely to be realised in the next 10 to 20 years.

The Roadmap was presented on 19 October. It is the result of an intensive two-year consultation and peer review process involving over 1000 high level European and international experts. The Roadmap identifies 35 large scale infrastructure projects, at various stages of development, in seven key research areas including Environmental Sciences; Energy; Materials Sciences; Astrophysics, Astronomy, Particle and Nuclear Physics; Biomedical and Life Sciences; Social Sciences and the Humanities; Computation and data Treatment. 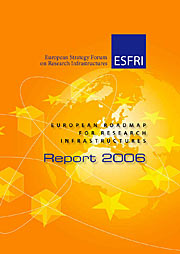 PR Image eso0640a
ESFRI report 2006
Send us your comments!
Subscribe to receive news from ESO in your language
Accelerated by CDN77
Terms & Conditions