The Antenna Bride and Bridegroom

The Atacama Large Millimeter/submillimeter Array (ALMA), an international telescope project, reached a major milestone on 2 March, when two 12-m ALMA prototype antennas were first linked together as an integrated system to observe an astronomical object.

"This achievement results from the integration of many state-of-the-art components from Europe and North America and bodes well for the success of ALMA in Chile", said Catherine Cesarsky, ESO's Director General.

The milestone achievement, technically termed 'First Fringes', came at the ALMA Test Facility (ATF), located near Socorro in New Mexico. Faint radio waves emitted by the planet Saturn were collected by two ALMA prototype antennas, then processed by new, high-tech electronics to turn the two antennas into a single, high-resolution telescope system, called an interferometer. The planet's radio emissions at a frequency of 104 gigahertz were tracked by the ALMA system for more than an hour.

Such pairs of antennas are the basic building blocks of the multi-antenna imaging system ALMA. In such a system, the signals recorded by each antenna are electronically combined with the signals of every other antenna to form a multitude of pairs. Each pair contributes unique information that is used to build a highly detailed image of the astronomical object under observation. When completed in the year 2012, ALMA will have 66 antennas.

"Our congratulations go to the dedicated team of scientists, engineers and technicians who produced this groundbreaking achievement for ALMA. Much hard work and many long hours went into this effort, and we appreciate it all. This team should be very proud today," said NRAO Director Fred K.Y. Lo. "With this milestone behind us, we now can proceed with increased confidence toward completing ALMA," he added.

ALMA, located at an elevation of 5,000m in the Atacama Desert of northern Chile, will provide astronomers with the world's most advanced tool for exploring the Universe at millimetre and submillimetre wavelengths. ALMA will detect fainter objects and be able to produce much higher-quality images at these wavelengths than any previous telescope system. Scientists are eager to use this transformational capability to study the first stars and galaxies that formed in the early Universe, to learn long-sought details about how stars are formed, and to trace the motion of gas and dust as it whirls toward the surface of newly-formed stars and planets.

"The success of this test is fundamental proof that the hardware and software now under development for ALMA will work to produce a truly revolutionary astronomical tool," said Massimo Tarenghi, the ALMA Director.

In addition to the leading-edge electronic and electro-optical hardware and custom software that proved itself by producing ALMA's first fringes, the system's antennas are among the most advanced in the world. The stringent requirements for the antennas included extremely precise reflecting surfaces, highly accurate ability to point at desired locations in the sky, and the ability to operate reliably in the harsh, high-altitude environment of the ALMA site.

The ALMA Test Facility operates the two prototype antennas built by Alcatel Alenia Space and European Industrial Engineering in Europe, and by VertexRSI (USA). These antennas were evaluated individually at the ATF. Both prototypes were equipped with electronic equipment for receiving, digitizing and transmitting signals to a central facility, where the signals are combined to make the antennas work together as a single astronomical instrument.

"The successful achievement of recording the first fringes with two ALMA antennas is certainly an important milestone in the scientific program," said Hans Rykaczewski, the European ALMA Project Manager. "It is encouraging and adds to our motivation to see that the principles of ALMA work - not only scientifically, but also from the point of view of organizing this project by partners located in four continents. This successful partnership is a good proof of principle for the future of large scientific projects in astronomy." 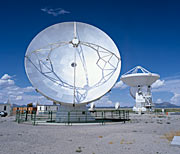 PR Image eso0710a
The ALMA prototype antennas
Send us your comments!
Subscribe to receive news from ESO in your language
Accelerated by CDN77
Terms & Conditions