Observing the image of a faint object that lies close to a star is a demanding task as the object is generally hidden in the glare of the star. Characterising this object, by taking spectra, is an even harder challenge. Still, thanks to ingenious scientists and a new ESO imaging spectrograph, this is now feasible, paving the way to an eldorado of many new thrilling discoveries.

These very high contrast observations are fundamental for directly imaging unknown extra-solar planets (i.e. planets orbiting a star other than the Sun), as well as low-mass stars and brown dwarfs, those failed stars that are too small to start burning hydrogen into helium.

Astronomer Niranjan Thatte and his colleagues developed a new method for exactly this purpose. The basis of the concept is relatively simple: while the positions of most of the features associated with the host star and artefacts produced by the telescope and the instrument scale with the wavelength, the location of a faint companion does not. So if the image has an internal reflection of the star masquerading as a planet, this phantom planet will be in one location in the image when looking in red light, and another when looking in blue; a real planet will stay at the same place no matter what colour of light one examines. Therefore, with the combined detection of spectra and position, one can see what is scaling, subtract it, and be left with what is fixed, that is the target dim object. Such observations can be done with specific instruments, called 'integral field spectrographs', such as the SINFONI instrument on ESO's VLT. This technique, termed Spectral Deconvolution (SD), although first proposed in 2002 for space-based applications, has never been applied to obtain spectra of a real object until now.

"We applied our new technique to a puzzling very small stellar companion - about twice the size of Jupiter - known as AB Doradus C and the outcome was surprising, "says Thatte.

Using SINFONI and this new technique, the astronomers could for the first time obtain a spectrum of the object that is free from the light of the brighter companion and that contains all the information necessary for a complete classification.

The new observations lead to a new temperature for the object and change the results that some of the same scientists derived in 2005 (eso0503).

"This is how science progresses," says Laird Close, leader of the science team. "New instruments lead to better techniques and measurements, which often lead to new results, and one must happily change course."

The SINFONI observations were complemented with previous data obtained on ESO's VLT with the NACO instrument, which were stored in the ESO archive.

AB Doradus is a system of 2 pairs of stars (four stars in total: a quadruple system), lying 48 light-years away towards the Doradus constellation (the Swordfish).

AB Doradus A is the young major member of this system and has a faint companion, AB Dor C, just 3 astronomical units (AU) away, or three times the distance between the Earth and the Sun. In our Solar System, this would be within the asteroid belt between the orbits of Mars and Jupiter.

AB Dor C was imaged for the first time, thanks to ESO's VLT, in 2005 (ESO Press Release eso0503). The other members of the system are the pair AB Doradus BaBb (also first imaged in the previous work of 2005) located 133 AU from AB Dor A. While AB Doradus A has a mass about 85 % that of the Sun, AB Doradus C is almost 10 times less massive than AB Doradus A and belongs to the category of cool red dwarfs.

Red dwarfs are extremely interesting because their mass is at the border with that of brown dwarfs. A precise knowledge of these stars is therefore a necessary tile in our understanding of the evolution of stars. If AB Doradus C were only slightly less massive than its 93 Jupiter-mass, it would have failed to become a star, being instead a brown dwarf. As it is, the centre of AB Doradus C is slowly heating up, and in about a billion years its core will become hot enough to begin fusing hydrogen into helium, something a brown dwarf will never do.

"This red dwarf is 100 million times closer to its brighter companion than the whole system is from us and about 100 times less bright. It is thus a perfect example where our very high contrast technique is required," says team member Matthias Tecza.

From the previous observations this unique star seemed to be cooler than expected for an object of such a mass and age. The new, more precise observations show that this is not the case, as the observations are in good agreement with theory, in particular with the models developed by the group of Gilles Chabrier from Lyon, France.

With a temperature of about 3 000 degrees (about half as hot as the Sun) and a luminosity about one thousand times dimmer than the Sun, AB Doradus C lies on the exact track expected for a 75 million year old star with 9% the Sun's mass. AB Doradus C is the only such star (young and cool) with an accurate mass, hence the determination of an accurate temperature is critical for validating these models.

In the future one can thus use these tracks to extrapolate the mass of small young stars, once its temperature and luminosity are precisely determined.

"Small stars are back on the expected track," concludes team member Roberto Abuter.

1. SINFONI is a near-infrared Integral Field Spectrograph (IFS) fed by a MACAO adaptive optics module. An IFS allows the simultaneous recording of two dimensional (angular) plus one dimensional (spectroscopic) information. The end products of integral field spectrographs are cubes of data: two dimensional images extended with a third spectroscopic dimension. So for each of a thousand slightly different colors, a full two-dimensional image is produced. The cube can be cut in slices in order to study the spatial and spectroscopic features of a given region. Movies showing the observations of AB Dor C with this instrument are available at http://www-astro.physics.ox.ac.uk/~thatte/abdorc

2. The advantages of using this newly developed spectral deconvolution (SD) technique with an Integral Field Spectrograph instead of the NACO SDI instrument used in the previous study of this object (ESO 02/05) are that while both techniques can find a faint companion anywhere in the field, this new SD method does not rely on any intrinsic feature of the hidden companion. When considering the spectrum, the continuum can be correctly measured and a high performance is achievable even without a coronagraph. The SD technique simultaneously detects and characterises any faint companion with high accuracy; with NACO SDI any detections had to be followed up by separate observations to take a spectrum. An Integral Field Spectrograph allows for far more efficient use of telescope time. These features make it a precious instrument for the quest of exoplanets. 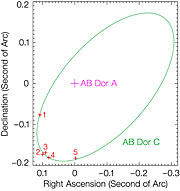 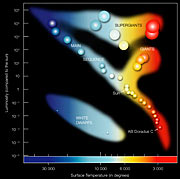 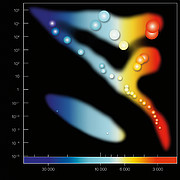