First Light for the PRIMA instrument

The PRIMA instrument [1] of the ESO Very Large Telescope Interferometer (VLTI) recently saw "first light" at its new home atop Cerro Paranal in Chile. When fully operational, PRIMA will boost the capabilities of the VLTI to see sources much fainter than any previous interferometers, and enable astrometric precision unmatched by any other existing astronomical facility. PRIMA will be a unique tool for the detection of exoplanets.

"PRIMA is specifically designed to see if one star 'wobbles' to and fro because it is has unseen planetary companions", says instrument scientist Gerard van Belle. "This allows us to not only detect exoplanets, but to measure their mass." PRIMA's expected astrometric precision of tens of micro-arcseconds is unmatched by any other existing astronomical facility, whether on the ground or in orbit" [2]. In addition to taking astrometric measurements PRIMA will be the key to the imaging of faint sources with the VLTI using the science instruments AMBER and MIDI.

The PRIMA instrument is unique amongst the VLTI instruments, in that it is effectively two interferometers in one. PRIMA will take data from two sources on the sky simultaneously: the brighter source can be used for tracking, allowing the interferometer to "stare" at the fainter source for longer than is now possible with conventional interferometers. Although there have been earlier pathfinder experiments to test this technique, PRIMA represents the first facility-class instrument of its kind that is open to all astronomers.

PRIMA parts arrived at the summit at Paranal at the end of July and were integrated and tested during the following month. On 2 September 2008, as a first milestone, starlight from two VLTI 1.8-m Auxiliary Telescopes was fed into the PRIMA system, and interference fringes were detected on PRIMA's Fringe Sensor Unit. Three days later the system was routinely using active tracking on the fringes, compensating for atmospheric turbulence.

First light - or, in the case of interferometric instruments, first fringes - actually occurred ahead of the ambitious schedule set out by lead engineer Francoise Delplancke: "There were many activities that all had to be successful simultaneously for this to happen, but the assembly, integration, and verification went smoothly - I was pleased by how easy and reliable the fringe tracking was, for our first try."

All PRIMA sub-systems [3] have been installed successfully for use with two Auxiliary Telescopes and will now be submitted to intensive commissioning tests before being offered to the community of users for routine observations [4].

[1]: PRIMA stands for "Phase Referenced Imaging and Microarcsecond Astrometry". AMBER and MIDI are two instruments of the VLTI.

[2]: When a planet orbits a star, its gravity effectively pulls the star, making it "wobble". This wobbling is generally measured by looking at the variations of the radial velocity of a star, but if precise enough measurements of the position of the star can be made, it should be possible to see this wobble directly. PRIMA should be precise enough to make these measurements for Jupiter-like planets. PRIMA will be able to measure angular differences of about ten micro-arcseconds - the angle that human hair grows within one second, as seen from 100 metres afar.

[3]: The PRIMA facility uses a number of components along the VLTI pipeline, including Star Separators (STSs) for the telescopes, Differential Delay Lines (DDLs), laser Metrology and two Fringe Sensor Units (FSUs). The Star Separators collect the light from two distinct stars to be sent through the interferometer. The DDLs, built by a consortium (Geneva Observatory, MPIA Heidelberg and Landessternwarte Heidelberg) compensate for slight differences in path lengths due to the separate positions on the sky of the two sources. Each Fringe Sensor Unit recombines light from both telescopes for the two sources separately to form interferometric fringes. The Metrology system ties everything together at the 1-nm level by sending light back through the system from the FSUs to the STSs and back again.

[4]: Four commissioning runs are scheduled for PRIMA over the next six months and will concentrate on testing and characterising the fringe tracking on a single star. Observations of two distinct stars will begin next year and will extend these tests to the dual-star mode. These tests will also result in PRIMA's first astrometric measurements. Soon afterwards PRIMA will begin serious operations in planet-finding surveys. 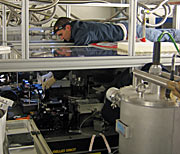 PR Image eso0829b
Preparing for PRIMA first light
Send us your comments!
Subscribe to receive news from ESO in your language
Accelerated by CDN77
Terms & Conditions