Using ESO's Very Large Telescope, astronomers have succeeded in measuring the size of giant galaxy Messier 87 and were surprised to find that its outer parts have been stripped away by still unknown effects. The galaxy also appears to be on a collision course with another giant galaxy in this very dynamic cluster.

The new observations reveal that Messier 87’s halo of stars has been cut short, with a diameter of about a million light-years, significantly smaller than expected, despite being about three times the extent of the halo surrounding our Milky Way [1]. Beyond this zone only few intergalactic stars are seen.

“This is an unexpected result,” says co-author Ortwin Gerhard. “Numerical models predict that the halo around Messier 87 should be several times larger than our observations have revealed. Clearly, something must have cut the halo off early on.”

The team used FLAMES, the super-efficient spectrograph at ESO’s Very Large Telescope at the Paranal Observatory in Chile, to make ultra-precise measurements of a host of planetary nebulae in the outskirts of Messier 87 and in the intergalactic space within the Virgo Cluster of galaxies, to which Messier 87 belongs. FLAMES can simultaneously take spectra many sources, spread over an area of the sky about the size of the Moon.

The new result is quite an achievement. The observed light from a planetary nebula in the Virgo Cluster is as faint as that from a 30-Watt light bulb at a distance of about 6 million kilometres (about 15 times the Earth–Moon distance). Furthermore, planetary nebulae are thinly spread through the cluster, so even FLAMES’s wide field of view could only capture a few tens of nebulae at a time.

“It is a little bit like looking for a needle in a haystack, but in the dark”, says team member Magda Arnaboldi. “The FLAMES spectrograph on the VLT was the best instrument for the job”.

At a distance of approximately 50 million light-years, the Virgo Cluster is the nearest galaxy cluster. It is located in the constellation of Virgo (the Virgin) and is a relatively young and sparse cluster. The cluster contains many hundreds of galaxies, including giant and massive elliptical galaxies, as well as more homely spirals like our own Milky Way.

The astronomers have proposed several explanations for the discovered “cut-off” of Messier 87’s, such as collapse of dark matter nearby in the galaxy cluster. It might also be that another galaxy in the cluster, Messier 84, came much closer to Messier 87 in the past and dramatically perturbed it about a billion years ago. “At this stage, we can’t confirm any of these scenarios,” says Arnaboldi. “We will need observations of many more planetary nebulae around Messier 87”.

One thing the astronomers are sure about, however, is that Messier 87 and its neighbour Messier 86 are falling towards each other. “We may be observing them in the phase just before the first close pass”, says Gerhard. “The Virgo Cluster is still a very dynamic place and many things will continue to shape its galaxies over the next billion years.”

[1] Although the standard value for the diameter of the Milky Way is about 100 000 light-years, its stellar halo is thought to extend out almost twice as far.

Planetary nebulae (PNe) are the spectacular final phase in the life of Sun-like stars, when the star ejects its outer layers into the surrounding space. Their name is a relic of an earlier era: early observers, using only small telescopes, thought that some of these nearby objects, such as the “Helix Nebula” resembled the discs of the giant planets in the Solar System. Planetary nebulae have strong emission lines, which make them relatively easy to detect at great distances, and also allow their radial velocities to be measured precisely. So planetary nebulae can be used to investigate the motions of stars in the faint outer regions of distant galaxies where velocity measurements are otherwise not possible. Moreover, planetary nebulae are representative of the stellar population in general. As they are relatively short-lived (a few tens of thousands of years — a mere blip on astronomical timescales), astronomers can estimate that one star in about 8000 million of Sun-like stars is visible as a planetary nebula at any given moment. Thus planetary nebulae can provide a unique handle on the number, types of stars and their motions in faint outer galaxy regions that may harbour a substantial amount of mass. These motions contain the fossil record of the history of galaxy interaction and the formation of the galaxy cluster.

This research is presented in a paper to appear in Astronomy and Astrophysics: “The Edge of the M87 Halo and the Kinematics of the Diffuse Light in the Virgo Cluster Core,” by Michelle Doherty et al. 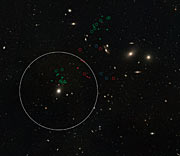 PR Image eso0919b
Planetary Nebulae in and around Messier 87 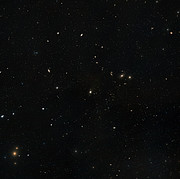 PR Image eso0919c
The Virgo Cluster
Send us your comments!
Subscribe to receive news from ESO in your language
Accelerated by CDN77
Terms & Conditions