A Cluster and a Sea of Galaxies

A new wide-field image released today by ESO displays many thousands of distant galaxies, and more particularly a large group belonging to the massive galaxy cluster known as Abell 315. As crowded as it may appear, this assembly of galaxies is only the proverbial “tip of the iceberg”, as Abell 315 — like most galaxy clusters — is dominated by dark matter. The huge mass of this cluster deflects light from background galaxies, distorting their observed shapes slightly.

When looking at the sky with the unaided eye, we mostly only see stars within our Milky Way galaxy and some of its closest neighbours. More distant galaxies are just too faint to be perceived by the human eye, but if we could see them, they would literally cover the sky. This new image released by ESO is both a wide-field and long-exposure one, and reveals thousands of galaxies crowding an area on the sky roughly as large as the full Moon.

These galaxies span a vast range of distances from us. Some are relatively close, as it is possible to distinguish their spiral arms or elliptical halos, especially in the upper part of the image. The more distant appear just like the faintest of blobs — their light has travelled through the Universe for eight billion years or more before reaching Earth.

Beginning in the centre of the image and extending below and to the left, a concentration of about a hundred yellowish galaxies identifies a massive galaxy cluster, designated with the number 315 in the catalogue compiled by the American astronomer George Abell in 1958 [1]. The cluster is located between the faint, red and blue galaxies and the Earth, about two billion light-years away from us. It lies in the constellation of Cetus (the Whale).

Galaxy clusters are some of the largest structures in the Universe held together by gravity. But there is more in these structures than the many galaxies we can see. Galaxies in these giants contribute to only ten percent of the mass, with hot gas in between galaxies accounting for another ten percent [2]. The remaining 80 percent is made of an invisible and unknown ingredient called dark matter that lies in between the galaxies.

The presence of dark matter is revealed through its gravitational effect: the enormous mass of a galaxy cluster acts on the light from galaxies behind the cluster like a cosmic magnifying glass, bending the trajectory of the light and thus making the galaxies appear slightly distorted [3]. By observing and analysing the twisted shapes of these background galaxies, astronomers can infer the total mass of the cluster responsible for the distortion, even when this mass is mostly invisible. However, this effect is usually tiny, and it is necessary to measure it over a huge number of galaxies to obtain significant results: in the case of Abell 315, the shapes of almost 10 000 faint galaxies in this image were studied in order to estimate the total mass of the cluster, which amounts to over a hundred thousand billion times the mass of our Sun [4].

To complement the enormous range of cosmic distances and sizes surveyed by this image, a handful of objects much smaller than galaxies and galaxy clusters and much closer to Earth are scattered throughout the field: besides several stars belonging to our galaxy, many asteroids are also visible as blue, green or red trails [5]. These objects belong to the main asteroid belt, located between the orbits of Mars and Jupiter, and their dimensions vary from some tens of kilometres, for the brightest ones, to just a few kilometres in the case of the faintest ones.

This image has been taken with the Wide Field Imager on the MPG/ESO 2.2-metre telescope at ESO’s La Silla Observatory in Chile. It is a composite of several exposures acquired using three different broadband filters, for a total of almost one hour in the B filter and about one and a half hours in the V and R filters. The field of view is 34 x 33 arcminutes.

[1] The Abell catalogue from 1958 comprised 2712 clusters of galaxies, and was integrated with an additional 1361 clusters in 1989. Abell put together this impressive collection by visual inspection of photographic plates of the sky, seeking those areas where more galaxies than average were found at approximately the same distance from us.

[2] Ten percent of a galaxy cluster’s mass consists of a very hot mixture of protons and electrons (a plasma), with temperatures as high as ten million degrees or more, which makes it visible to X-ray telescopes.

[4] A weak lensing study of the galaxy cluster Abell 315 has been published in a paper that appeared in Astronomy & Astrophysics in 2009 (“Weak lensing observations of potentially X-ray underluminous galaxy clusters”, by J. Dietrich et al.).

[5] The blue, green or red tracks indicate that each asteroid has been detected through one of the three filters, respectively. Each track is composed of several, smaller sub-tracks, reflecting the sequence of several exposures performed in each of the filters; from the length of these sub-tracks, the distance to the asteroid can be calculated. 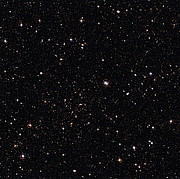 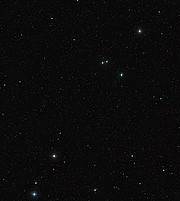 PR Video eso1019a
Zooming in on Abell 315
Send us your comments!
Subscribe to receive news from ESO in your language
Accelerated by CDN77
Terms & Conditions