New observations reveal the secrets of a dying star

Astronomers using the Atacama Large Millimeter/submillimeter Array (ALMA) have discovered a totally unexpected spiral structure in the material around the old star R Sculptoris. This is the first time that such a structure, along with an outer spherical shell, has been found around a red giant star. It is also the first time that astronomers could get full three-dimensional information about such a spiral. The strange shape was probably created by a hidden companion star orbiting the red giant. This work is one of the first ALMA early science results to be published and it appears in the journal Nature this week.

A team using the Atacama Large Millimeter/submillimeter Array (ALMA), the most powerful millimetre/submillimetre telescope in the world, has discovered a surprising spiral structure in the gas around the red giant star R Sculptoris [1][2][3]. This means that there is probably a previously unseen companion star orbiting the star [4]. The astronomers were also surprised to find that far more material than expected had been ejected by the red giant.

“We’ve seen shells around this kind of star before, but this is the first time we’ve ever seen a spiral of material coming out from a star, together with a surrounding shell,” says the lead author on the paper presenting the results, Matthias Maercker (ESO and Argelander Institute for Astronomy, University of Bonn, Germany).

Because they blow out large amounts of material, red giants like R Sculptoris are major contributors to the dust and gas that provide the bulk of the raw materials for the formation of future generations of stars, planetary systems and subsequently for life.

Even in the Early Science phase, when the new observations were made, ALMA greatly outperformed other submillimetre observatories. Earlier observations had clearly shown a spherical shell around R Sculptoris, but neither the spiral structure nor a companion was found.

"When we observed the star with ALMA, not even half its antennas were in place. It's really exciting to imagine what the full ALMA array will be able to do once it's completed in 2013," adds Wouter Vlemmings (Chalmers University of Technology, Sweden), a co-author of the study.

Late in their lives, stars with masses up to eight times that of the Sun become red giants and lose a large amount of their mass in a dense stellar wind. During the red giant stage stars also periodically undergo thermal pulses. These are short-lived phases of explosive helium burning in a shell around the stellar core. A thermal pulse leads to material being blown off the surface of the star at a much higher rate, resulting in the formation of a large shell of dust and gas around the star. After the pulse the rate at which the star loses mass falls again to its normal value.

Thermal pulses occur approximately every 10 000 to 50 000 years, and last only a few hundred years. The new observations of R Sculptoris show that it suffered a thermal pulse event about 1800 years ago that lasted for about 200 years. The companion star shaped the wind from R Sculptoris into a spiral structure.

“By taking advantage of the power of ALMA to see fine details, we can understand much better what happens to the star before, during and after the thermal pulse, by studying how the shell and the spiral structure are shaped,” says Maercker. “We always expected ALMA to provide us with a new view of the Universe, but to be discovering unexpected new things already, with one of the first sets of observations is truly exciting.”

In order to describe the observed structure around R Sculptoris, the team of astronomers has also performed computer simulations to follow the evolution of a binary system [5]. These models fit the new ALMA observations very well.

"It’s a real challenge to describe theoretically all the observed details coming from ALMA, but our computer models show that we really are on the right track. ALMA is giving us new insight into what's happening in these stars and what might happen to the Sun in a few billion years from now," says Shazrene Mohamed (Argelander Institute for Astronomy, Bonn, Germany and South African Astronomical Observatory), a co-author of the study.

“In the near future, observations of stars like R Sculptoris with ALMA will help us to understand how the elements we are made up of reached places like the Earth. They also give us a hint of what our own star's far future might be like,” concludes Matthias Maercker.

[1] R Sculptoris is an example of an asymptotic giant branch (AGB) star. These are stars with initial masses between 0.8 and 8 solar masses in the late stages of their lives. They are cool, red giants with large mass loss in the form of strong stellar winds, and are typically long-period variables. Their structure consists of a tiny central core of carbon and oxygen surrounded by a helium and hydrogen burning shell, and then an enormous convective envelope. The Sun will eventually evolve into an AGB star.

[2] The ejected shell formed around AGB stars is composed of gas and dust grains. The dust grains can be spotted by looking for thermal emission extending from the far infrared through millimetre wavelengths. At millimetre wavelengths emission from the CO molecule allows astronomers to obtain high-resolution maps of the gas emission from the strong stellar wind generated by the AGB stars. These observations are also excellent tracers of the gas distribution around these objects. The high sensitivity of ALMA makes it possible to directly image the dust condensation zone and the structure of the material around AGB stars, showing details smaller than 0.1 arcsecond.

[3] A similar spiral, but without a surrounding shell, has been seen in NASA/ESA Hubble Space Telescope observations of the star LL Pegasi. But, unlike the new ALMA observations, these data did not allow the full three-dimensional structure to be studied. The Hubble observations detect the dust and ALMA the molecular emission.

[4] Unseen binaries have also been suggested as an explanation for the odd shapes seen in related objects, planetary nebulae. After the AGB phase, intermediate and low-mass stars (0.8–8 solar masses) will end their lives by forming a planetary nebula. These are the glowing remains of the stellar envelope of gas ejected during the AGB phase, which is ionised by ultraviolet radiation emitted by the central star. Many planetary nebulae have extremely complex and varied morphologies. Binary central stars, stellar discs and magnetic fields have been suggested as the mechanism that produces such a variety of shapes.

[5] The system modelled here consists of a primary AGB star going through a thermal pulse and a small companion star. The separation between the stars used in the simulation is 60 astronomical units with a total mass of the system of two solar masses. The orbital period is 350 years.

This research was presented in a paper, “Unexpectedly large mass loss during the thermal pulse cycle of the red giant star R Sculptoris”, by Maercker et al. to appear in the journal Nature.

The ALMA Observatory will be inaugurated on 13 March 2013. 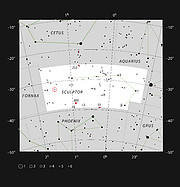 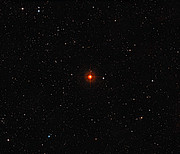 PR Video eso1239d
Model of the evolution of the material around the old star R Sculptoris over 2000 years
Send us your comments!
Subscribe to receive news from ESO in your language
Accelerated by CDN77
Terms & Conditions