Diamonds in the Tail of the Scorpion

A new image from ESO’s La Silla Observatory in Chile shows the bright star cluster Messier 7. Easily spotted with the naked eye close to the tail of the constellation of Scorpius, it is one of the most prominent open clusters of stars in the sky — making it an important astronomical research target.

Messier 7, also known as NGC 6475, is a brilliant cluster of about 100 stars located some 800 light-years from Earth. In this new picture from the Wide Field Imager on the MPG/ESO 2.2-metre telescope it stands out against a very rich background of hundreds of thousands of fainter stars, in the direction of the centre of the Milky Way.

At about 200 million years old, Messier 7 is a typical middle-aged open cluster, spanning a region of space about 25 light-years across. As they age, the brightest stars in the picture — a population of up to a tenth of the total stars in the cluster — will violently explode as supernovae. Looking further into the future, the remaining faint stars, which are much more numerous, will slowly drift apart until they become no longer recognisable as a cluster.

Open star clusters like Messier 7 are groups of stars born at almost the same time and place, from large cosmic clouds of gas and dust in their host galaxy. These groups of stars are of great interest to scientists, because the stars in them have about the same age and chemical composition. This makes them invaluable for studying stellar structure and evolution.

An interesting feature in this image is that, although densely populated with stars, the background is not uniform and is noticeably streaked with dust. This is most likely to be just a chance alignment of the cluster and the dust clouds. Although it is tempting to speculate that these dark shreds are the remnants of the cloud from which the cluster formed, the Milky Way will have made nearly one full rotation during the life of this star cluster, with a lot of reorganisation of the stars and dust as a result. So the dust and gas from which Messier 7 formed, and the star cluster itself, will have gone their separate ways long ago.

The first to mention this star cluster was the mathematician and astronomer Claudius Ptolemy, as early as 130 AD, who described it as a “nebula following the sting of Scorpius”, an accurate description given that, to the naked eye, it appears as a diffuse luminous patch against the bright background of the Milky Way. In his honour, Messier 7 is sometimes called Ptolemy’s Cluster. In 1764 Charles Messier included it as the seventh entry in his Messier catalogue. Later, in the 19th century, John Herschel described the appearance of this object as seen through a telescope as a “coarsely scattered cluster of stars” — which sums it up perfectly. 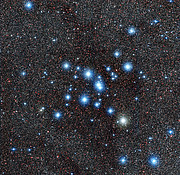 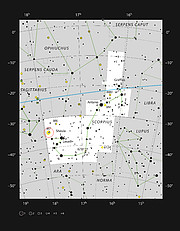 PR Video eso1406b
Panning across the bright star cluster Messier 7
Send us your comments!
Subscribe to receive news from ESO in your language
Accelerated by CDN77
Terms & Conditions