Beyond the Hubble Constant

A few months ago, a violent stellar explosion – a supernova – was discovered in an extremely distant galaxy by an international team of astronomers [1]. This is the very promising first result of a recently initiated, dedicated search for such objects. Subsequent spectral observations have shown this to be the most distant supernova ever observed. Although it is very faint, it has been possible to classify it as a supernova of Type Ia, a kind that is particularly well suited for cosmological distance determinations.

The present discovery was made during the team's first observations with the 4-metre telescope at the Cerro Tololo Inter-American Observatory in Chile. This telescope is equipped with a wide-field camera at its prime focus that enables the simultaneous recording of the images of even very faint objects in a 15-arcminute field. Hundreds of distant galaxies are located in a field of this size and this observational method is therefore very well suited for a search of faint and transient supernovae in such galaxies. With a carefully planned observing sequence, it is possible to image up to 55 sky fields per night. A comparison with earlier exposures makes it possible to detect suddenly appearing supernovae as faint points of light near the galaxy in which the exploding star is located (the parent galaxy).

A crucial feature of the new programme is the possibility to perform follow-up spectroscopic observations, whenever a new supernova is discovered. For this, the team has obtained access to several other large telescopes, including the ESO 3.5-metre New Technology Telescope (NTT), the 3.9-metre Anglo-Australian Telescope (AAT) and the Multi-Mirror Telescope (MMT) in Arizona, U.S.A..

The Spectrum of the Supernova

The present supernova was first detected at Tololo on March 30, 1995. It was given the official designation SN 1995K, and its spectrum was observed a few nights later with the EMMI instrument at the ESO NTT at La Silla. Further direct images were taken with EMMI and also with the high-resolution NTT SUSI camera, three of which are shown on the photo with text accompanying this Press Release. The supernova is located only 1 arcsecond from the centre of the parent galaxy.

As the supernova was very faint (its magnitude was about 22.7, or about 5 million times fainter than what can be seen with the unaided eye), an exposure of 2.5 hours was necessary to collect enough photons to allow a classification of its spectrum. Because of the very small angular distance, the light from the supernova was heavily contaminated with that of the parent galaxy, but the excellent angular resolution of the NTT optics made it possible to overcome this problem. It was also possible to measure the redshift [2] of the galaxy (and thereby of the supernova) as 0.478. This demonstrates that SN 1995K is the most distant supernova (indeed, the most distant star!) ever observed [3].

The spectrum clearly showed SN 1995K to be of Type Ia. This is evident by a comparison with that of a ``standard'' Type Ia supernova (SN 1989B), cf. the graph with explanatory text attached to this Press Release. When the redshift of SN 1995K is taken into account, the two spectra are very similar.

The current belief is that supernovae of this type are due to the explosions of white dwarf stars in compact binary systems which are triggered by the successive accretion of stellar material from the other component.

As the sequence of NTT images shows, SN 1995K quickly faded and in late May 1995, it could no longer be observed. The rate of change (the ``light-curve'') also closely matched that of a normal Type Ia supernova.

Why Are Type Ia Supernovae So Important?

While supernovae are important astrophysical objects by themselves, Type Ia supernovae are also of great interest to cosmologists. The main reason is that they provide independent information about the distances to galaxies and thereby about the expansion rate of the Universe.

A simple way to determine the distance to a remote galaxy is by measuring its redshift, calculate its velocity from the redshift and divide this by the Hubble constant, H0. For instance, the measured redshift of the parent galaxy of SN 1995K (0.478) yields a velocity of 116,000 km/sec, somewhat more than one-third of the speed of light (300,000 km/sec). From the universal expansion rate, described by the Hubble constant (H0 = 20 km/sec per million lightyears as found by some studies), this velocity would indicate a distance to the supernova and its parent galaxy of about 5,800 million lightyears. The explosion of the supernova would thus have taken place 5,800 million years ago, i.e. about 1,000 million years before the solar system was formed.

However, such a simple calculation works only for relatively ``nearby'' objects, perhaps out to some hundred million lightyears. When we look much further into space, we also look far back in time and it is not excluded that the universal expansion rate, i.e. the Hubble constant, may have been different at earlier epochs. This means that unless we know the change of the Hubble constant with time, we cannot determine reliable distances of distant galaxies from their measured redshifts and velocities. At the same time, knowledge about such change or lack of the same will provide unique information about the time elapsed since the Universe began to expand (the ``Big Bang''), that is, the age of the Universe and also its ultimate fate.

Cosmologists are therefore eager to determine not only the current expansion rate (i.e., the Hubble constant, H0) but also its possible change with time (known as the deceleration parameter, q0). Although a highly accurate value of H0 has still not become available, increasing attention is now given to the observational determination of the second parameter, cf. also the Appendix at the end of this Press Release.

For such studies, independent, reliable distances to very distant objects are needed. This is exactly what may be obtained from careful observations of Type Ia supernovae and this is why they are so important for cosmology.

It has been found that all supernovae of Type Ia radiate the same luminous energy at the moment of maximum light (within an uncertainty of 15 - 20 percent or less). If all such supernovae were located at the same distance, they would appear equally bright to us. This is of course not the case and the difference in observed brightness between individual Type Ia supernovae is therefore a direct measure of their relative distances.

A supernova that is located at twice the distance of another will appear four times fainter. The distances to a few nearby objects of this type have now been measured, thus fixing the zero-point (that is, the absolute brightness of a Type Ia supernova [4]). At least in principle, this then allows to measure the accurate distances to all others, including SN 1995K.

Towards a Measurement of q0

The crucial ingredients for the use of a high-redshift supernova like SN 1995K to measure the distance are its correct classification and the establishment of an accurate light-curve. The above method only works if we can be sure that it is of Type Ia and we can deduce the apparent brightness at maximum light.

The current classification scheme of supernovae is based on spectra obtained near the maximum brightness of the event. For a meaningful and secure distance determination, it is therefore of paramount importance to classify the supernova by obtaining a spectrum. Since a supernova at redshift 0.4 reaches a peak brightness of about magnitude 22.3-23.3 (depending on the value of q0 [5]), this is not a simple task. It is also a major organisational problem to obtain the necessary, significant amount of observing time at large telescopes at short notice.

Preliminary photometry indicates a peak (red) magnitude of SN 1995K of about 22.7, but the uncertainty of this value is still so large that this measurement alone cannot be used to determine the value of q0. This will require many more observations of supernovae at least as distant as the present one, a daunting task that may nevertheless be possible within this broad, international programme.

It is estimated that a reliable measurement of q0 may become possible when about 20 Type Ia supernovae with accurate peak magnitudes have been measured. According to the discovery predictions, this could be possible within the next couple of years. In this connection, it is of some importance that for this investigation, it is in principle not necessary to know the correct value of the Hubble constant H0 in advance; q0 may still be determined by comparing the relative distance scale of distant supernovae with that of nearby ones.

This research is described in more detail in a forthcoming article in the September 1995 issue of the ESO Messenger.

[2] In astronomy, the redshift denotes the fraction by which the lines in the spectrum of an object are shifted towards longer wavelengths. The observed redshift of a distant galaxy gives a direct estimate of the apparent recession velocity as caused by the universal expansion. Since the expansion rate increases with the distance, the velocity is itself a function (the Hubble relation) of the distance to the object.

[5] The brighter the supernova at a given redshift is at maximum, the larger is q0.

A determination of the deceleration parameter q0 by means of astronomical observations is important because it will allow us to choose between the various current theories of the evolution of the Universe, or at least to eliminate some of them as impossible.

If the value turns of to be small, e.g. q0 ~ 0, then there has been only a small decrease (deceleration) of the universal expansion in the past. In this case, a galaxy's velocity does not change much with time and the actual distance is very nearly as indicated from the Hubble relation. Should, however, the value of q0 be significantly larger, then a galaxy's velocity would have been larger in the past than it is now. The velocity we now measure would therefore be ``too high'' (since it refers to the time the light was emitted from the galaxy), and the distance obtained by dividing with the Hubble constant will be too large.

The value of q0 is proportional to the total amount of matter in the Universe. A measurement of q0 will establish limits for the amount of ``missing matter'', i.e. the ``invisible'' matter which cannot be directly observed with current observational techniques and which is believed to be the dominant mass component. 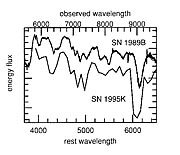