A Surprise From the Pulsar in the Crab Nebula

New observations of the spectrum of the rapidly spinning neutron star (the `pulsar') in the Crab Nebula have been carried out with the ESO 3.5-metre New Technology Telescope (NTT) by a group of Italian astronomers [1]. Because of greatly improved spectral resolution which allows to register even very fine details in the pulsar's spectrum, they are able to determine for the first time with high accuracy the overall dependance of the emission on wavelength, i.e. the 'shape' of the spectrum. Quite unexpectedly, they also detect a hitherto unknown 100 A (10 nm) broad 'absorption dip', which can be securely attributed to the pulsar. These results open an exciting new window for the study of the extreme physical processes close to a pulsar.

The Nature of Pulsars

It is estimated that there may be as many as 100 million neutron stars in our Galaxy. A neutron star is the superdense remnant of the extremely violent supernova explosion that occurs at the end of the life of a comparatively massive star. In fact, all stars that are more than about 6 times heavier than the Sun are believed to end their lives as supernovae.

During the explosion, the central core of the dying star collapses in a few milliseconds and the matter at the centre is compressed to a density comparable to that of an atomic nucleus. Due to the enormous inward pressure, the atomic particles are squeezed together into a kind of neutron jam. The outcome is the formation of a neutron star with a diameter of 10-15 kilometres, weighing as much as the Sun. In accordance with the physical law that implies that the rotation momentum of the exploding star must be conserved, newborn neutron stars will rotate very rapidly around their axis, in some cases as fast as 100 times per second. In the same way, the new neutron star is expected to possess a strong magnetic field.

Of these myriads of neutron stars, about 700 have been observed to emit radio pulses (hence the name 'pulsar'). A few of these can also be detected at optical wavelengths and only one is bright enough to allow reasonably detailed spectroscopic observations with currently available optical telescopes.

This is the famous Crab Pulsar, also known as PSR 0531+21. It was discovered as a radio pulsar in 1968, soon after the detection of the first known radio pulsar. A little later, pulsed optical emission from the Crab Pulsar was also observed. It was quickly recognized that this emission obeys Pacini's law [2]. Stated in simple terms, this implies that the emission of optical light from the pulsar is due to the interaction between very energetic elementary particles close to the neutron star and its incredibly strong magnetic field.

The Crab Pulsar is especially interesting, because we have detailed historical information about the event from which it was born: the very bright 'guest star' which was so well observed and described by Chinese astronomers in the year 1054 AD in the constellation of Taurus (the Bull). At the exact location of this supernova is now observed the famous Crab Nebula in which the Crab Pulsar is embedded.

The Crab Nebula is a very conspicuous object in the sky (the name alludes to its overall form), and it emits a very significant amount of energy at all wavelengths of the electromagnetic spectrum that have so far been explored, from long-wave radio waves to gamma-rays of ultra-high energy. At X-ray wavelengths (above 1 keV), it is in fact one of the brightest, continuously emitting sources in the sky. The Crab Pulsar also emits at all wavelengths, but it is much fainter than the surrounding nebula. This Press Release is accompanied by a photo with caption, showing the pulsar in the innermost region of the nebula.

At optical wavelengths, the Crab Pulsar is a comparatively faint, point-like object of magnitude 16.6. It is interesting to note that, from the measured, outward motion of the individual condensations in the Crab Nebula, this object was recognized, already a decade before the discovery of pulsars, as the possible central remnant of the Crab Nebula [3]. This was fully confirmed when its pulsed radio emission was detected in 1968.

At this optical brightness, about 10,000 times fainter than the faintest stars that can be perceived with the unaided eye, the Crab Pulsar is still by far the brightest of the few known neutron stars whose optical light has been detected. It is in fact more than 1,000 times brighter than the next brightest pulsar, PSR 0540-69 in the Large Magellanic Cloud, a satellite galaxy to the Milky Way system in which we live.

Observations of the Crab Pulsar Spectrum

Thus it was possible for American astronomer J. Beverley Oke (Caltech) to perform the first optical measurements of the Crab Pulsar spectrum already in 1969. Although this was quite an observational feat at the time, the information content of that measurement is not very high by modern standards; the spectral resolution was only about 200 A (20 nm). Oke's spectrum of the Crab Pulsar qualitatively confirmed the theoretical expectations by being flat and featureless and no isolated spectral features were seen at this low resolution.

It appears that since 1969, nobody has obtained spectrum of the Crab pulsar with a better spectral resolution than Oke. This seems amazing, but may at least partly be explained by the fact that this object is deeply embedded in the much brighter Crab Nebula of expanding gas. Any spectrum of the pulsar is therefore necessarily strongly contaminated by that of the surrounding nebula, making it difficult to obtain a 'pure' spectrum of the pulsar.

Now, however, the group of Italian astronomers has performed a much improved spectral measurement of the Crab Pulsar with the EMMI multi-mode instrument at the ESO NTT. The resulting spectrum has a resolution of 2 A (0.2 nm), i.e. dramatically better than the one achieved in 1969, and reflecting the incredible evolution of astronomical instrumentation during the intervening quarter of a century. It thus shows many more spectral details. The analysis of the spectrum required very careful work; as would be expected, it was in particular the effective 'subtraction' of the background light from the Crab Nebula that caused the greatest problem.

The new, first-ever 'clean', high-resolution optical spectrum of a pulsar, is a spectacular scientific result; the corresponding graph and its caption are attached to this Press Release. First of all, the overall shape of the spectrum, i.e. the dependance of the emission from the pulsar on wavelength is now defined with unprecedented accuracy. Theory predicts a straight line; this is well confirmed and the slope of the line can be determined with a precision better than 1 percent. This new measurement has a direct implication for our understanding of the acceleration of energetic particles, close to the surface of the pulsar and also of the structure and intensity of its magnetic field.

A Mysterious Feature in the New Spectrum

Moreover, for the first time a feature is detected in the spectrum. Close to 5900 A (590 nm), i.e. at a wavelength that corresponds to orange light, a rather wide absorption 'dip' (100 A or 10 nm) is apparent in the otherwise featureless spectrum. It goes without saying that the astronomers have checked very carefully whether this feature might not, after all, have an origin outside the pulsar. But the measurements show that this dip is neither due to the Earth's atmosphere, absorption in interstellar space between the pulsar and us, nor absorption in the Crab Nebula around the pulsar. It thus appears firmly established that this feature must arise in the immediate surroundings of the neutron star.

What is the cause of this mysterious dip? Unfortunately, the present measurements do not allow a firm interpretation as to its physical nature. Normally the exact wavelength of a spectral feature will indicate the origin, but the observed wavelength does not correspond to any obvious feature in classical atomic-line spectra.

The presence of this feature is an unexpected bonus for the study of the physics of neutron stars. Following a preliminary investigation of the possible causes, the astronomers are now of the opinion that it may have to do with light being absorbed due to the peculiar motion of atoms in the superintense magnetic field around the pulsar [4].

To cast more light on this problem, the group is now planning to obtain spectroscopic observations with an even higher spectral resolution. If not before, this will in any case become possible when the first 8.2-metre VLT Unit Telescope enters into operation in about two years' time.

[2] Named after Franco Pacini, Director of the Florence observatory and former President of the ESO Council.

[3] Much of this work is due to Lodewijk Woltjer, a Dutch astronomer, who was ESO Director General from 1975 to 1987.

[4] However, better data are needed to understand the nature of the absorption. While Iron has some lines in this spectral range, it could as well be cyclotron absorption for Hydrogen. 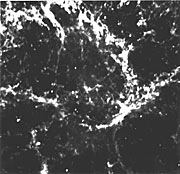 PR Image eso9532b
Spectrum of Crab Pulsar
Send us your comments!
Subscribe to receive news from ESO in your language
Accelerated by CDN77
Terms & Conditions