The observations took place on 31 January 1996, at 01:00 UT. They show that the apparent separations between the split nuclei, originally discovered at ESO on 12 December 1995, cf. eso9601 have further increased; they are now approx. 6 and 17 arcsec, respectively. At the distance of the comet at the time of the new observations (2.5 AU = 375 million kilometres), this corresponds to projected distances of 11,000 km and 31,000 km.

It now appears that the break-up of the nucleus occurred in two steps, in late October and around 1 December 1995. This means that the dramatic brightening happened at least 6 weeks before the first break-up.

Seen from Earth, comet Schwassmann-Wachmann 3 is now moving behind the Sun, and no further observations from ESO are possible. In the early (northern) summer of 1996, the comet will reappear and since it will then have moved into the northern hemisphere, the astronomers intend to continue their observations by means of the USM telescope at Mount Wendelstein in Southern Germany.

On the image presented here, each condensation has the appearance of an individual comet with its own tail. It will be interesting to learn whether all three parts will still persist when the comet is re-observed later this summer.

The image shown on this Press Photo constitutes the most recent data in an extensive series of co-ordinated observations of this comet. The success of these observations is largely due to the good co-operation by many astronomers all over the world and by means of modern communication and data exchange techniques, for instance via the Internet. 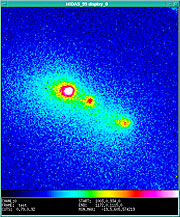