The Innermost Coma of Comet Hyakutake

These false-colour images are reproductions from a short-exposure CCD frame, obtained with the Danish 1.54-metre telescope and the DFOSC instrument with a 2052 x 2052 pix Loral/Lesser CCD. They show the innermost coma of Comet Hyakutake and the pronounced asymmetry of the dust distribution around the nucleus.

The exposure lasted 60 seconds and was made through a red filtre (R) at 06:37 UT on February 29, 1996. The sky condition was not optimal and the seeing was about 1.5 arcseconds. The observers were Klaus Simon (Institute for Astronomy and Astrophysics, University of Munich, Germany) and Chris Lidman (ESO-Chile); the image processing was done by Stefano Benetti (ESO-Chile). The pixel size is 0.39 arcsec and the original frame covers an area of 13.3 x 13.3 arcmin. On both photos, North is up and East is left.

At the time of this observation, Comet Hyakutake was 0.843 AU (126 million kilometres) from the Earth, and 1 arcsec on the photos corresponds to a little more than 600 kilometres projected. The distance to the Sun was 229 million kilometres.

The first photo (eso9615a) displays an area of approx. 9.2 x 6.7 arcmin. The typical elongation in the anti-solar direction (at p.a. = 290 deg, i.e. West-North-West) is very pronounced. The asymmetry in the upper-right quadrant (North-West) is also obvious. When moving outwards from the nucleus (located within the black area), the isophotes (curves of equal brightness; particularly well shown by the contrasting colours on these photos) turn anti-clockwise over an angle of about 20 degrees. This effect is caused by the repulsive action on the dust grains by the solar photons.

On this short exposure and in this wavelength region (6000 - 7000 A), only reflection of sunlight from dust grains is seen. The largest extension of the dust coma (East-West) is just over 7 arcmin, or 260,000 kilometres projected.

The second photo (eso9615b) is a close-up of the innermost coma. The field measures about 45 x 45 arcsec (27,500 x 27,500 kilometres projected) and although the isophotes appear more round than on the other photo, their asymmetry is also evident on this scale. This is particularly obvious at the edges of the field.

The nucleus is located where the intensity is highest; this position is offset towards North-West from the geometric centre of the innermost isophotes here resolved, i.e. those within 3-4 arcseconds (10 pixels) from the peak of light. This indicates that the dust is mostly coming off the nucleus in the South-East direction, i.e. from the surface area that is illuminated by sunlight (as expected). A detailed analysis of this image - still to be performed - will allow to determine the outflow charateristics in quantitative terms.

The central peak of light is completely stellar-like (it has the width of the seeing disk), and there is therefore no sign of angular extension of this feature on this photo.

There is also no indication on this photo of well delineated, jet-like activity, as for instance seen on Comet Hale-Bopp in August-October 1995. It is likely, however, that such jets will appear at a later time, when the evaporation rate increases as the comet moves closer to the Sun. 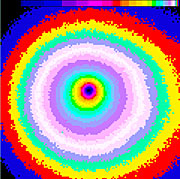 PR Image eso9615b
The innermost coma of comet Hyakutake
Send us your comments!
Subscribe to receive news from ESO in your language
Accelerated by CDN77
Terms & Conditions