The Near-nucleus Environment in Comet Hyakutake

This new image obtained with ESO's New Technology Telescope (NTT) shows the circumnuclear region of the comet Hyakutake, expected to pass close to Earth in the upcoming days.

This photo is a reproduction of a 5-second R-filtre CCD exposure obtained by Chris Lidman (ESO) and Olivier Le Fevre (Observatoire de Meudon, France) on UT March 15.3, 1996, with the EMMI Multimode Instrument on the ESO 3.5-m New Technology Telescope (NTT). It has been image-processed by Stefano Benetti at ESO-Santiago and Olivier Hainaut at the ESO HQ in Garching. The field shown is a small part of the original frame and measures 53 x 53 arcsec (198x198 pixels; each 0.27 arcseconds). North is up and East is to the left. At the time of the exposure, the comet was at a geocentric distance of 51.9 million km; this means that 1 arcsec = 250 km and 1 pixel = 68 km (projected) in this image. At the distance of the comet, the round field shown here roughly corresponds to the size of the Earth.

This image displays the asymmetric components of the coma structure near the cometary nucleus. It shows a major dust jet emerging from the nucleus at 1 arcsec distance (250 km projected) in the North-East quadrant and turning counterclockwise a few arcsec (about 1000 km projected) further out. This is the first image to show evidence of such a well delimited jet this close to the nucleus.

The innermost section of the straight ion tail, directed towards West-North-West (to the right) is also very well visible. On this high-angular resolution image, it extends inwards to a distance of only a few arcsec (500 - 1000 km) from the nucleus.

The increased near-nucleus activity, as demonstrated on this photo, is a positive sign for the expected performance of the comet when it passes close to the Earth one week from now and also thereafter. Combined with other information which has become available during the past few days, for instance the first naked-eye sighting of a short tail, there is now no doubt that the comet will become a most impressive object in the northern sky during the coming weeks. 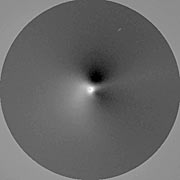 PR Image eso9622a
The near-nucleus environment in comet Hyakutake
Send us your comments!
Subscribe to receive news from ESO in your language
Accelerated by CDN77
Terms & Conditions