Preparing for the Data Deluge from the VLT

This week astronomers at the European Southern Observatory have tested a novel approach of doing astronomy from the ground. Inaugurating a new era, the ESO 3.5-metre New Technology Telescope (NTT) at La Silla successfully performed a series of observations under automatic control by advanced computer software developed by the ESO Data Management Division (DMD) for use with the ESO Very Large Telescope (VLT). This move has been made necessary by technological improvements in telescopes and the increasing competition among scientists for these valuable resources.

Over the past few years, astronomical telescopes and the amount of data they produce have grown rapidly in size. With the advent of increasingly efficient, large digital cameras, the new telescopes with mirrors as large as 8 to 10 metres in diameter will deliver Gigabytes of valuable information each night.

There is little doubt that scientific breakthroughs will be made with these telescopes and it should be no surprise that there is fierce competition for precious observing nights among the international astronomical community.

In order to make sure that the available observing time at the VLT will be used in the best and most efficient way, ESO has been developing advanced computer systems which will automatically schedule observations according to the scientific priorities of astronomers and the prevailing conditions of weather and equipment at the observatory.

No longer will the astronomer be required to spend weeks processing data into a form where results can be extracted. The continuous flow of astronomical data made possible with this system is referred to as the VLT Data Flow System, now being perfected by the ESO Data Management Division for use on ESO's Very Large Telescope project.

First tests at the NTT

On February 5, a team of software engineers and astronomers from ESO used a first version of the new VLT Data Flow System to perform observations on ESO's New Technology Telescope (NTT) at the La Silla Observatory in Chile.

A computer file containing a complete description of an observation (for instance, object position in the sky, filtres and exposure time, and other relevant information) prepared in advance by an astronomer was transferred via the satellite link from the ESO Headquarters in Germany to the NTT computers at La Silla and executed on the control system of the telescope.

The telescope then moved to the correct position in the sky, the camera was activated and a few minutes later, a processed image a distant galaxy appeared on the screen in front of the observers.

The image was saved in an automatic archive system that writes the astronomical data on CD-ROM.

The entire process took place automatically and demonstrated that this system is capable of taking high quality data from the sky at the best possible time and delivering the results to the astronomer, efficiently and in the most convenient form.

This is the first time that a ground-based telescope has been operated under the new system. This successful initial test bodes well for the start-up of the VLT.

During 1997, ESO will further develop the data flow system in preparation for the beginning of commissioning of the first VLT 8.2-metre unit, less then 12 months from now.

Getting ready for the night: The ESO 3.5-m New Technology Telescope (NTT), with which the mentioned observations were made, is one of the world's most advanced astronomical telescopes. It also serves as an important test-bench for the front-line technologies that are being implemented at the ESO Very Large Telescope Array (VLT). 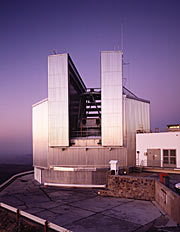