The Unusual Tails of Comet Hale-Bopp

While famous Comet Hale-Bopp continues its long voyage towards the outer reaches of the solar system, observations proceed with telescopes in the southern hemisphere. These research programmes aim at a better understanding of the further development of this very active comet as it moves away from the Sun and slowly cools. Among the key questions are for instance: "When will it cease to display a dust tail?" and "Will the nucleus undergo outbursts during which much fresh material will be dispensed into space, as this has occasionally happened by other comets (e.g. Halley)?"

Hale-Bopp is now too faint (magnitude 8) to be seen with the unaided eye. At the end of January 1998, it is about 635 million kilometres from the Sun.

Recent observations at the ESO La Silla observatory with the 1-metre Schmidt Telescope have shown that the comet is still very active and, in particular, that it still possesses an impressive tail structure. Two photos from early January 1998 are shown here; they were obtained with pan- and red-sensitive photographic film/filter combinations, respectively. They demonstrate the unusual appearance and continuing, enormous extent of this tail.

The plates were photographically enhanced to better bring out the fainter details of the tail structure, while retaining a low contrast that allows to display the overall appearance at the same time. Still, some unevenness of the background on the films is visible, in particular a gradual darkening towards the field border. The fine details are best seen on the high-resolution versions of the photos.

The sky fields shown are oriented so that North is up and East to the left. They cover nearly 5 degrees in the N-S direction, i.e. almost to the edges of the film. The star images are trailed because the telescope was guided on the moving comet during the exposure. At the time of the exposures, the distance to the comet from the Earth and the Sun was 568 million km and 592 million km, respectively. It was located deep in the southern sky, in the constellation of Pictor .

Both images show the normal dust-tail in the anti-solar direction (upwards - to the North), extending over a distance of more than 4 o to the edge of the field. Since the photos were made near the time that the Earth was crossing the comet's orbital plane, they also show the so-called neck-line structure, a narrow and very straight feature in the same direction which is caused by sunlight reflected in the thin dust sheet in this plane. The true length of this feature depends on the exact geometry of the dust distribution, but may well be of the order of 1 AU (150 million km) or even more.

Interestingly, there is also a narrow, sunward spike , or anti-tail , that may be followed at least 0.5 o in the other direction. The tail/anti-tail phenomenon is interpreted by ESO astronomer Hermann Boehnhardt as due to the presence of large and old dust grains that were released by the nucleus at least 100 days before these observations, possibly much earlier. More details are available on IAU Circular 6812.

Observations of Comet Hale-Bopp at the ESO observatories will continue during the coming years.

Comprehensive and regularly updated information about Comet Hale-Bopp and links to many related websites is available at the ESO Hale-Bopp Homepage. 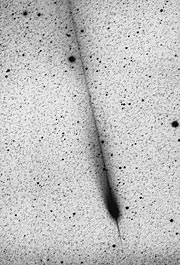 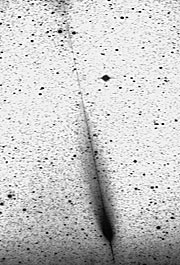 PR Image eso9806b
The unusual tails of comet Hale-Bopp
Send us your comments!
Subscribe to receive news from ESO in your language
Accelerated by CDN77
Terms & Conditions