After a period of technical commissioning tests, the first 8.2-m telescope of the ESO VLT (UT1) has successfully performed an extensive series of "real science" observations, yielding nearly 100 hours of precious data. They concern all possible types of astronomical objects, from distant galaxies and quasars to pulsars, star clusters and solar system objects.

After a period of technical commissioning tests, the first 8.2-m telescope of the ESO VLT (UT1) has successfully performed an extensive series of "real science" observations , yielding nearly 100 hours of precious data. They concern all possible types of astronomical objects, from distant galaxies and quasars to pulsars, star clusters and solar system objects.

This intensive Science Verification (SV) Programme took place as planned from August 17 to September 1, 1998, and was conducted by the ESO SV Team at the VLT Observatory on Paranal (Chile) and at the ESO Headquarters in Garching (Germany).

The new giant telescope lived fully up to the high expectations and worked with spectacular efficiency and performance through the entire period. All data will be released by September 30 via the VLT archive and the web (with some access restrictions - see below).

Just before the beginning of the SV period, the 8.2-m primary mirror in its cell was temporarily removed in order to install the "M3 tower" with the tertiary mirror [1]. The reassembly began on August 15 and included re-installation at the Cassegrain focus of the VLT Test Camera that was also used for the "First Light" images in May 1998. After careful optical alignment and various system tests, the UT1 was handed over to the SV Team on August 17 at midnight local time.

The first SV observations began immediately thereafter and the SV Team was active 24 hours a day throughout the two-week period. Video-conferences between Garching and Paranal took place every day at about noon Garching time (6 o'clock in the morning on Paranal). Then, while the Paranal observers were sleeping, data from the previous night were inspected and reduced in Garching, with feedback on what was best to do during the following night being emailed to Paranal several hours in advance of the beginning of the observations.

The campaign ended in the morning of September 1 when the telescope was returned to the Commissioning Team that has since continued its work. The FORS instrument is now being installed and the first images from this facility are expected shortly.

During the two-week SV period, a total of 154 hours were available for astronomical observations. Of these, 95 hours (62%) were used to collect scientific data, including calibrations, e.g. flat-fielding and photometric standard star observations. 15 hours (10%) were spent to solve minor technical problems, while another 44 hours (29%) were lost due to adverse meteorological conditions (clouds or wind exceeding 15 m/sec).

The amount of telescope technical downtime is very small at this moment of the UT1 commissioning. This fact provides an impressive indication of high technical reliability that has been achieved and which will be further consolidated during the next months.

The meteorological conditions that were encountered at Paranal during this period were unfortunately below average, when compared to data from the same calendar period in earlier years. There was an excess of bad seeing and fewer good seeing periods than normal.

Nevertheless, the measured image quality on the acquired frames was often better than the seeing measured outside the enclosure by the Paranal seeing monitor. Part of this very positive effect is due to "active field stabilization", now performed during all observations by rapid motion (10 - 70 times per second) of the 1.1-m secondary mirror of beryllium (M2) and compensating for the "twinkling" of stars.

All of the SV data are now in the process of being prepared for public release by September 30, 1998 to the ESO and Chilean astronomical communities. It will be possible to retrieve the data from the VLT archive, and a set of CDs will be distributed to all astronomical research institutes within the ESO member states and Chile.

Moreover, data obtained on the HDF-S will become publicly available worldwide, and retrievable from the VLT archive.

Updated information on this data release can be found on the ESO web site at http://www.eso.org/vltsv/.

It is expected that the first scientific results based on the SV data will become available in the course of October and November 1998.

This Press Release is accompanied by three photos that reproduce some of the images obtained during the SV period.

The first photo is a colour composite of the HDF-S NICMOS sky field that combines exposures obtained in different wavebands: ultraviolet (U) + blue (B), red (R) and near-infrared (I). For all of them, the image quality is better than 0.9 arcsec. Most of the objects seen in the field are distant galaxies. The image is reproduced in such a way that it shows the faintest features scaled, while rendering the image of the star below the large spiral galaxy approximately white. The spiral galaxy is displayed in such a way that the internal structure is visible.

A provisional analysis has shown that limiting magnitudes that were predicted for the HDF-S observations (27.0 - 28.5, depending on the band), were in fact reached.

The next photo is similar to the first one, but uses a near-IR frame obtained with the Hubble Space Telescope NICMOS instrument instead of the VLT I-frame. The HST image has nearly the same total exposure time as the VLT images. Their combination is meaningful since the VLT and NICMOS images reach similar depths and show more or less the same faint objects. This is the result of several effects compensating each other: while more distant galaxies are redder and therefore better visible at the infrared waveband of the NICMOS image and this image has a better angular resolution than those from the VLT, the collecting area of the UT1 mirror is over 11 times larger than that of the HST.

It is interesting to note that all objects in the NICMOS image are also visible in the VLT images, with the exception of the very red object just left of the face-on spiral. The bright red object near the bottom has not before been detected in optical images (to the limit of R ~ 26 mag), but is clearly present in all the VLT Test Camera coadded images, with the exception of the U-band image. Both of these very red objects are possibly extremely distant, elliptical galaxies [2].

The additional information that can be obtained from the combination of the VLT and the infrared NICMOS images has an immediate bearing on the future work with the VLT. When the infrared, multi-mode ISAAC instrument enters into operation in early 1999, it will be able to obtain spectra of such objects and, in general, to deliver very deep infrared images. Thus, the combination of visual (from FORS) and infrared (from ISAAC) images and spectra promises to become an extremely powerful tool that will allow the detection of very red and therefore exceedingly distant galaxies. Moreover, it is obvious that this sky field is not very crowded - much longer exposure times will thus be possible without encountering serious problems of overlapping objects at the "confusion limit".

The galaxy ESO342-G017 was observed on August 19, 1998 during a spell of excellent observing conditions. Two exposures, each lasting 120 seconds, were taken through a red filtre to produce this photo. The quality of the original images is excellent, with seeing (FWHM) of only 0.26 arcsec measured on the stars in the frame.

ESO342-G017 is an Sc-type spiral galaxy seen edge-on, and the Test Camera was rotated so that the disk of the galaxy appears horizontal in the figure. Thanks to the image quality, the photo shows much detail in the rather flat disk, including a very thin, obscuring dust band and some brighter knots, most probably star-forming regions.

This galaxy is located well outside the Milky Way band in the southern constellation of Sagittarius. Its distance is about 400 million light-years (recession velocity about 7,700 km/sec). A number of more distant galaxies are seen in the background on this short exposure.

[1] The flat and elliptically shaped, tertiary mirror M3 is mounted on top of the M3 Tower that is fixed in the center of the M1 Cell. The tower can rotate along its axis and deflects the light coming from the M2 mirror to the astronomical instruments on either Nasmyth platform. A mechanism at the top of the M3 Tower is used to move the M3 mirror away from the optical path when the instrument at the Cassegrain focus is used, e.g. the Test Camera during the SV observations.

[2] This effect is due to the fact that the more distant a galaxy is, the larger is the velocity with which it recedes from us (Hubble's law). The larger the velocity, the further its emitted light will be shifted redwards in the observed spectrum (the Doppler effect) and the redder its image will appear to us. By comparing the brightness of a distant galaxy in different wavebands (measuring its colour), it is therefore in practice possible to estimate its redshift and thus its distance (the " photometric redshift" method). 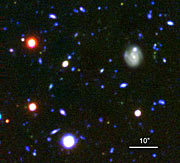 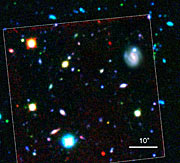 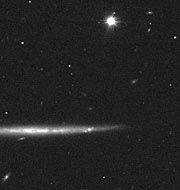