First Images and Spectra from ISAAC on UT1

The VLT Infrared Spectrometer And Array Camera (ISAAC) [1] was installed at the first 8.2-m VLT Unit Telescope (UT1) on November 14, 1998, cf. ESO PR Photos 42a-h/98. ISAAC is the second major VLT instrument to be installed at the VLT and the first to be fully designed and developed at ESO within its Instrumentation Division.

Following evacuation of its large vacuum vessel, cooling to cryogenic temperature and alignment with the telescope according to the planned schedule, it successfully achieved technical first light during the night between November 16 and 17, 1998.

The first focus tests on stars yielded images of excellent sharpness, around 0.45 arcsec full-width-half-maximum (FWHM). During the following nights, even better images, as small as 0.25 arcsec in relatively short exposures, were obtained, testifying to the quality of the site as well as the optical quality of both the telescope and instrument. Observations were executed using the new VLT Control and Data Flow Systems which are driven by Observation Blocks that define all details of the required astronomical exposures.

In addition to direct images in various infrared colours (selected with different optical filters), spectroscopic observations were also made during the first few nights of operation.

This Press Release is accompanied by several images and spectra which illustrate some of the exceptional new astronomical capabilities offered by this instrument.

eso9856b displays a spectacular three-colour composite image of RCW38 , obtained through three near-infrared filters. This is a region in the Milky Way at a distance of about 5,000 light years, where stars which have recently formed in clouds of gas and dust are still heavily obscured and cannot be observed in the visible part of the spectrum. Contrarily, as this image shows, they are very well seen at infrared wavelengths where the obscuration is substantially lower. The diffuse radiation is a mixture of starlight scattered by the dust and gas in the area, and atomic and molecular hydrogen line emission.

eso9856c is a Ks (2.16µm) image, centred on the distant radio galaxy MRC0316-257 (redshift z = 3.14). It was obtained primarily to locate other distant galaxies for future spectroscopic observations with ISAAC.

eso9856d is a colour composite image of the galaxy cluster CL2244-02 (redshift z = 0.3 ), combining a 20 min jittered ISAAC Ks (2.16µm) exposure with 15 min V (green-yellow) and R (red) exposures, obtained with the VLT Test Camera at the UT1 Nasmyth focus. In addition to the prominent blue arc, produced by gravitational lensing of a galaxy at redshift z = 2.24 , there are also notable, very red arcs, both closer to the centre and further out. They were only detected in the infrared image and are probably due to lensing of a much more distant galaxy.

eso9856e is a colour composite image of the merging galaxy system ESO202-G23 made by combining an ISAAC H (1.65µm) exposure with (blue) and R (red) exposures made with the VLT Test Camera at Nasmyth focus. At least one of the two nuclei is obviously an Active Galaxy Nucleus (AGN) whose partially collimated ultraviolet radiation is exciting the surrounding gas to the North. Also visible is a blue star-forming complex to the South of the centre and a complicated pattern of gas emission due to the combination of arms resulting from the merger, as well as heavy dust extinction. Of additional interest is the arc of very red objects in the lower part of the image which are more distant galaxies.

eso9856f is an infrared colour composite of the quadruply lensed quasar system MG0414+0534 made by combining 20 min ISAAC J (1.25µm) and Ks (2.16µm) exposures. This complex of images is only about 2 arcsec across. At the centre is the red galaxy at redshift z = 0.96 which is responsible for the four (of which two are not completely resolved) gravitationally lensed images of a z = 2.64 quasar plus a faint arc.

eso9856g shows a long-slit (2 arcmin) spectrum in the 2 - 2.5µm spectral region of the Herbig Haro object HH212 . The spectral resolution is about 500. It is believed that a protostar - that is invisible even at infrared wavelengths - is responsible for the two pulsed jets seen in this spectral image. They are remarkable because of the high degree of symmetry of the 'blobs' which have been ejected in opposite directions (up and down in this image). Each of the individual 'images' shows the jets in a different spectral line emitted by molecular hydrogen that has been shock excited by the impact of the ejected gas.

eso9856h is an infrared spectrum showing the Hydrogen-alpha (0.6563µm) emission line (indicated with an arrow), shifted to 1.06µm in a star-forming galaxy at redshift z = 0.62 , discovered in the CFRS survey. The total integration time with ISAAC was only 1 hour.

[1] ISAAC is a cryogenic infrared imager and spectrometer (spectral region 0.9 - 5 µm) installed at the Nasmyth B focus of UT1. It has two arms, one for the Short Wavelength (SW) spectral domain (0.9 - 2.5 µm), and one for the Long Wavelength (LW) spectral domain (2.5 - 5 µm), both equipped with state-of-the-art detectors. ISAAC has a variety of imaging and spectroscopy modes in both of the arms. It is controlled via a panoply of software templates for defining and executing sequences of operations for Acquisition, Observation and Calibration. As any other VLT instrument, ISAAC can be used in Service or Visitor Mode. 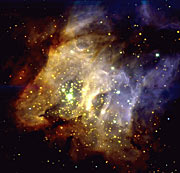 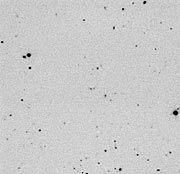 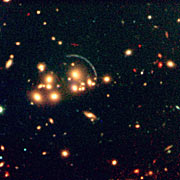 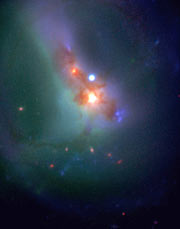 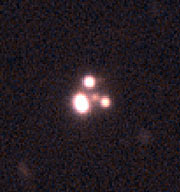 PR Image eso9856h
Starforming galaxy at redshift 0.62
Send us your comments!
Subscribe to receive news from ESO in your language
Accelerated by CDN77
Terms & Conditions