"Fly" with the VLT over the Moon's surface

A few days after the "First Light" of the VLT Infrared Spectrometer And Array Camera (ISAAC) at the first 8.2-m VLT Unit Telescope (UT1), the ESO Team of astronomers and engineers at Paranal have succeeded in observing a lunar occultation of Jupiter with the new instrument. During this event, that took place on 28 November 1998, the dark rim of the Moon's disk moved in front of the planet, covering it from view. Somewhat later, Jupiter reappeared behind the opposite, illuminated rim.

The ISAAC Team made use of this occasion to perform further test observations with ISAAC and the 8.2-m VLT UT1. For this, short exposures were made at the ISAAC Long Wavelength arm through a narrow band (1.5%) filter centred at wavelength 3.2 µm. They lasted 4 sec during the early phase of the occultation and decreased to 0.8 sec, then 0.4 and finally 0.08 sec, as progressively brighter areas of the illuminated part of the Moon's surface moved into the field-of-view.

The infrared frames are presented here as two video clips.

The first, short sequence shows the first phase of the occultation (ingress) during which the dark Moon rim (upper left) covers Jupiter's disk. The bands in the planet atmosphere are well visible, and the polar areas are bright at this infrared wavelength. In this and the following video, the Moon moves from left to right, corresponding to West-to-East in the sky.

The second sequence consists of frames taken between 00:47:38 and 02:01:09 hrs Universal Time (UT). During this period, the telescope followed the motion of Jupiter, while the Moon moved in front of the planet.

The visual effect is that of a "flight" over the Moon's surface. The sequence begins at the dark side and soon moves over the terminator that separates "day" and "night" on the Moon. Here the shadows are long and the lunar surface relief is particularly well visible. Various craters pass by as the surface brightness continues to increase. At the end, Jupiter re-emerges (the egress phase) behind the bright Moon rim. Due to the sudden change of illumination, exposure time problems were encountered at this moment.

Quite a few websites are available with information about occultations. Note, in particular, that of the International Occultation Timing Association (IOTA) and the dedicated Sky & Telescope Occultation Page. 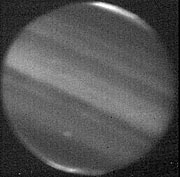 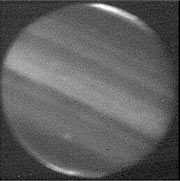