A Star-Forming Region in Ara

The new Wide-Field Imager (WFI) at the MPG/ESO 2.2-m telescope at the La Silla observatory continues to obtain impressive images of the southern sky. Recently, a series of images were obtained of areas in the Milky Way band, including some in which interstellar nebulae of gas and dust are seen. Each frame records 8184 x 8196, or over 67 million, pixels in a sky field of 32 x 32 arcmin 2. The present photos show the RCW 108 complex of bright and dark nebulae in the southern association Ara OB1, a star-forming region in the constellation Ara (The Altar), deep in the southern sky.

RCW 108 is a molecular cloud that is in the process of being destroyed by intense ultraviolet radiation from heavy and hot stars in the nearby stellar cluster NGC 6193 , seen to the left in the photos. Most of this radiation comes from the bright object near the center of the image, which is actually a binary system composed of two O-type stars. The red glow that pervades the field is emission in the red H-alpha spectral line of hydrogen. It reveals a massive stream of gas that flows away from the molecular complex as it is being heated and ionized.

The small bright patch with several stars near the darkest part of the nebulosity, to the right in the photos, is the infrared source IRAS 16362-4845 . It marks a site where a small cluster of stars is being formed at present.

The designation RCW 108 refers to the inclusion of this object in "A catalogue of H-alpha emission regions in the southern Milky Way", published by three astronomers (A.W. Rodgers, C.T. Campbell and J.B. Whiteoak) in 1960.

In eso9925a , the resolution has been degraded by reducing the number of pixels in one direction from about 8000 to 3000 in the "High-Resolution version", in order to make the image transportable over the web without incurring completely unacceptable transfer times. Still it is very large, even in the highly compressed jpeg-format, reflecting the great amount of details visible. The "Normal" and "Preview" versions are smaller and may be acquired much faster, but with a corresponding loss of detail. The "Full-Resolution" version of eso9925b retains the original pixel structure and image sharpness. It covers an area that corresponds to about 1/7 of the full WFI field. 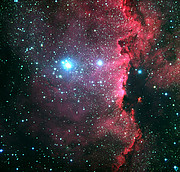 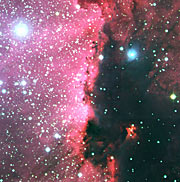