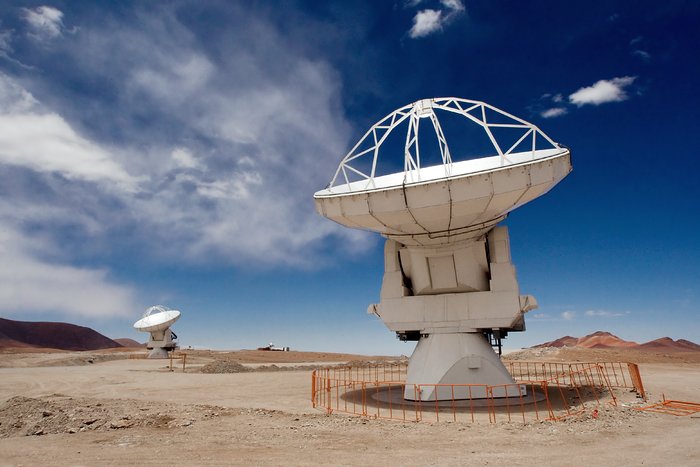 Two of the Atacama Large Millimeter/submillimeter Array (ALMA) 12-metre antennas gaze at the sky at the observatory’s Array Operations Site (AOS), high on the Chajnantor plateau at an altitude of 5000 metres in the Chilean Andes.

Eight antennas have been installed at the AOS since November 2009. More antennas will be installed on the Chajnantor plateau during the next months and beyond, allowing astronomers to start producing early scientific results with the ALMA system around late 2011. After this, the interferometer will steadily grow to reach its full scientific potential, with at least 66 antennas.

ALMA is the largest ground-based astronomy project in existence, and will comprise a giant array of 12-metre submillimetre quality antennas, with baselines of up to about 16 kilometres. An additional, compact array of 7-metre and 12-metre antennas will complement the main array. The ALMA project is an international collaboration between Europe, East Asia and North America in cooperation with the Republic of Chile. ESO is the European partner in ALMA.