The Blob, the Very Rare Massive Star and the Two Populations

The nebula N214 [1] is a large region of gas and dust located in a remote part of our neighbouring galaxy, the Large Magellanic Cloud. N214 is a quite remarkable site where massive stars are forming. In particular, its main component, N214C (also named NGC 2103 or DEM 293), is of special interest since it hosts a very rare massive star, known as Sk-71 51 [2] and belonging to a peculiar class with only a dozen known members in the whole sky. N214C thus provides an excellent opportunity for studying the formation site of such stars.

Using ESO's 3.5-m New Technology telescope (NTT) located at La Silla (Chile) and the SuSI2 and EMMI instruments, astronomers from France and the USA [3] studied in great depth this unusual region by taking the highest resolution images so far as well as a series of spectra of the most prominent objects present.

N214C is a complex of ionised hot gas, a so-called H II region [4], spreading over 170 by 125 light-years. At the centre of the nebula lies Sk-71 51, the region's brightest and hottest star. At a distance of ~12 light-years north of Sk-71 51 runs a long arc of highly compressed gas created by the strong stellar wind of the star. There are a dozen less bright stars scattered across the nebula and mainly around Sk-71 51. Moreover, several fine, filamentary structures and fine pillars are visible.

The green colour in the composite image, which covers the bulk of the N214C region, comes from doubly ionised oxygen atoms [5] and indicates that the nebula must be extremely hot over a very large extent.

The central and brightest object is not a single star but a small, compact cluster of stars. In order to study this very tight cluster in great detail, the astronomers used sophisticated image-sharpening software to produce high-resolution images on which precise brightness and positional measurements could then be performed. This so-called "deconvolution" technique makes it possible to visualize this complex system much better, leading to the conclusion that the tight core of the Sk-71 51 cluster, covering a ~ 4 arc seconds area, is made up of at least 6 components.

From additional spectra taken with EMMI (ESO Multi-Mode Instrument), the brightest component is found to belong to the rare class of very massive stars of spectral type O2 V((f*)). The astronomers derive a mass of ~80 solar masses for this object but it might well be that this is a multiple system, in which case, each component would be less massive.

From the unique images obtained and reproduced, the astronomers could study in great depth the properties of the 2341 stars lying towards the N214C region. This was done by putting them in a so-called colour-magnitude diagram, where the abscissa is the colour (representative of the temperature of the object) and the ordinate the magnitude (related to the intrinsic brightness). Plotting the temperature of stars against their intrinsic brightness reveals a typical distribution that reflects their different evolutionary stages.

Two main stellar populations show up in this particular diagram: a main sequence, that is, stars that like the Sun are still centrally burning their hydrogen, and an evolved population. The main sequence is made up of stars with initial masses from roughly 2-4 to about 80 solar masses. The stars that follow the red line are main sequence stars still very young, with an estimated age of about 1 million years only. The evolved population is mainly composed of much older and lower mass stars, having an age of 1,000 million years.

From their work, the astronomers classified several massive O and B stars, which are associated with the H II region and therefore contribute to its ionisation.

A Blob of Ionised Gas

A remarkable feature of N214C is the presence of a globular blob of hot and ionised gas at ~ 60 arc seconds (~ 50 light-years in projection) north of Sk-71 51. It appears as a sphere about four light-years across, split into two lobes by a dust lane which runs along an almost north-south direction. The blob seems to be placed on a ridge of ionised gas that follows the structure of the blob, implying a possible interaction.

The H II blob coincides with a strong infrared source, 05423-7120, which was detected with the IRAS satellite. The observations indicate the presence of a massive heat source, 200,000 times more luminous than the Sun. This is more probably due to an O7 V star of about 40 solar masses embedded in an infrared cluster. Alternatively, it might well be that the heating arises from a very massive star of about 100 solar masses still in the process of being formed.

"It is possible that the blob resulted from massive star formation following the collapse of a thin shell of neutral matter accumulated through the effect of strong irradiation and heating of the star Sk-71 51", says Mohammad Heydari-Malayeri from the Observatoire de Paris (France) and member of the team."Such a "sequential star formation" has probably occurred also toward the southern ridge of N214C".

Newcomer to the Family

The compact H II region discovered in N214C may be a newcomer to the family of HEBs ("High Excitation Blobs") in the Magellanic Clouds, the first member of which was detected in LMC N159 at ESO. In contrast to the typical H II regions of the Magellanic Clouds, which are extended structures spanning more than 150 light years and are powered by a large number of hot stars, HEBs are dense, small regions usually "only" 4 to 9 light-years wide. Moreover, they often form adjacent to or apparently inside the typical giant H II regions, and rarely in isolation.

"The formation mechanisms of these objects are not yet fully understood but it seems however sure that they represent the youngest massive stars of their OB associations", explains Frederic Meynadier, another member of the team from the Observatoire de Paris. "So far only a half-dozen of them have been detected and studied using the ESO telescopes as well as the Hubble Space Telescope. But the stars responsible for the excitation of the tightest or youngest members of the family still remain to be detected."

[1]: The letter "N" (for "Nebula") in the designation of these objects indicates that they were included in the "Catalogue of H-alpha emission stars and nebulae in the Magellanic Clouds" compiled and published in 1956 by American astronomer-astronaut Karl Henize (1926 - 1993).

[2]: The name Sk-71 51, is the abbreviation of Sanduleak -71 51. The American astronomer Nicholas Sanduleak, while working at the Cerro Tololo Observatory, published in 1970 an important list of objects (stars and nebulae showing emission-lines in their spectra) in the Magellanic Clouds. The "-71" in the star's name is the declination of the object, while the "51" is the entry number in the catalogue.

[4]: A gas is said to be ionised when its atoms have lost one or more electrons - in this case by the action of energetic ultraviolet radiation emitted by very hot and luminous stars close by. The heated gas shines mostly in the light of ionized hydrogen (H) atoms, leading to an emission nebula. Such nebulae are referred to as "H II regions". The well-known Orion Nebula is an outstanding example of that type of nebula.

[5]: The hotter the central object of an emission nebula, the hotter and more excited will be the surrounding nebula. The word "excitation" refers to the degree of ionization of the nebular gas. The more energetic the impinging particles and radiation, the more electrons will be lost and higher is the degree of excitation. In N214C, the central cluster of stars is so hot that the oxygen atoms are twice ionized, i.e. they have lost two electrons.

The research made on N214C has been presented in a paper accepted for publication by the leading professional journal, Astronomy and Astrophysics ("The LMC H II Region N214C and its peculiar nebular blob", by F. Meynadier, M. Heydari-Malayeri and Nolan R. Walborn). The full text is freely accessible as a PDF file from the A&A web site.

The images are false-colour composite images based on observations made with the SuSI2 instrument on the ESO New Technology Telescope through different filters. The observations were made on 28 September 2002 when the sky quality was very good (seeing of 0.5-0.8 arc second). To record in great detail the nebulosity, the exposures were taken through narrow band filters centred on the emission lines Hydrogen-alpha (656.2 nm), Oxygen III (500.7 nm) and Hydrogen-beta (486.2 nm). Basic exposures of 300 seconds were obtained, with 2 exposures being taken for the first two filters and four for the O III image. For the study of the stars in the field, further exposures through broadband filters B, V and R were also taken, with a total of 240 seconds for the B and V filters and of 120 seconds for the R filter. All these exposures were then associated with a given channel to produce the final composite: R and H-alpha to red, V and [O III] to green and H-beta and B to blue. Haennes Heyer (ESO) made the final processing of the image. 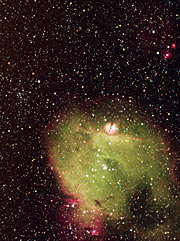 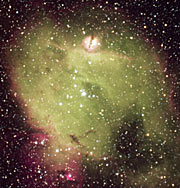 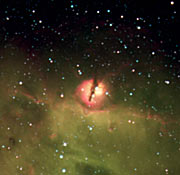 PR Image eso0513e
The Nebular Blob in N214C
Send us your comments!
Subscribe to receive news from ESO in your language
Accelerated by CDN77
Terms & Conditions