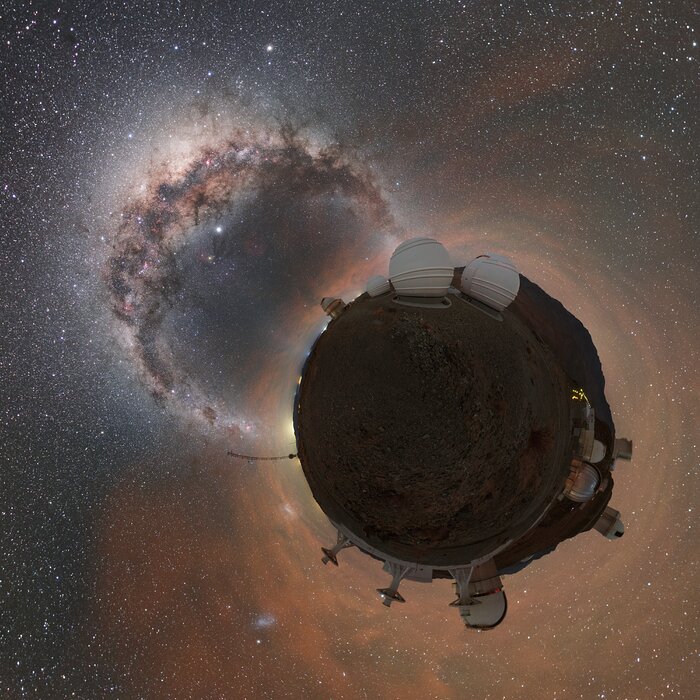 It looks like a tiny planet but this Picture of the Week actually captures ESO’s La Silla Observatory using a photography technique called stereographic projection, whereby a flat image is projected onto a sphere.

La Silla, home to several of the instruments in the ESO family, was inaugurated in 1969. As well as being the first ESO observatory, it has also been at the forefront of many scientific and technological firsts. ESO’s pioneering 3.58-metre New Technology Telescope (NTT) was the first in the world to have a computer-controlled, or “active”, main mirror, leading the way for ESO’s Very Large Telescope (VLT), where all four 8-meter mirrors are active.The High Accuracy Radial velocity Planet Searcher (HARPS) instrument attached to the ESO 3.6-metre telescope is a hugely successful exoplanet hunter, discovering among other things the first ‘Earth-like’ planet in a star’s habitable zone.

Above “Planet La Silla” arches the pearlescent arm of our home galaxy, the Milky Way. It is the arid conditions of the Atacama Desert in Chile that allow such a view, as La Silla experiences over 300 cloudless nights per year.