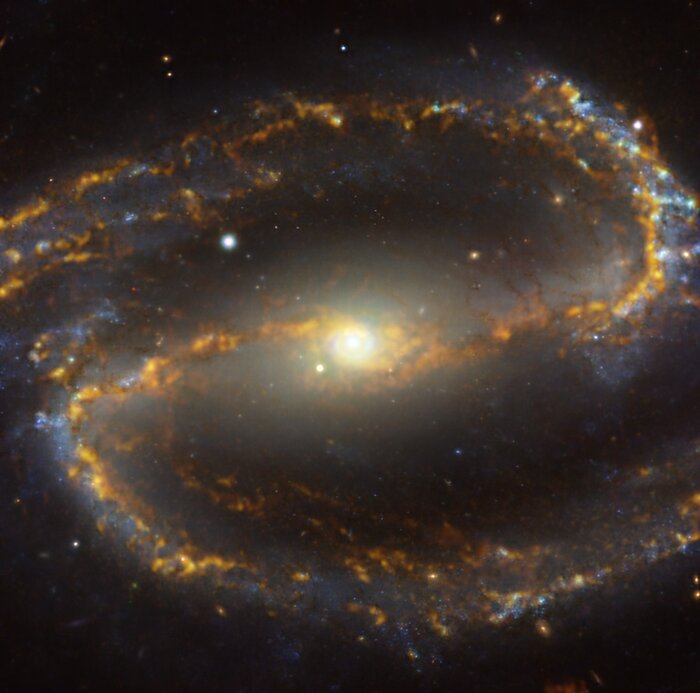 This picture of the week looks almost good enough to eat! However, despite its resemblance to a mouthwatering caramel swirl it is in fact an image of the NGC 1300 galaxy, located approximately 61 million light-years from Earth in the constellation Eridanus. NGC 1300 is a spiral galaxy, with a bar of stars and gas –– seen here crossing the image horizontally –– and a central ring of intense star formation.

The image is a combination of observations conducted at different colours  –– or wavelengths –– of light. The golden caramel glow corresponds to clouds of molecular gas, the raw material out of which stars form. These data were taken with  the Atacama Large Millimeter/submillimeter Array (ALMA), in which ESO is a partner. The bluish regions in the background reveal the distribution of slightly older, already formed stars, imaged by the Multi-Unit Spectroscopic Explorer (MUSE) on ESO’s Very Large Telescope (VLT).

The images were taken as part of the Physics at High Angular resolution in Nearby GalaxieS (PHANGS) project, which is making high-resolution observations of nearby galaxies with telescopes operating across all wavelengths of the electromagnetic spectrum. Different wavelengths can reveal a multitude of secrets about a galaxy, and by comparing them astronomers are able to study what activates, boosts or hinders the birth of new stars.