GRAAL on a quest to improve HAWK-I's vision 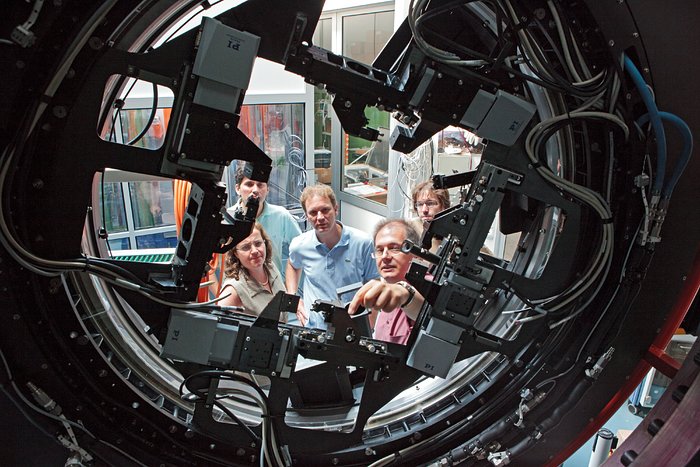 This image shows some of the GRAAL instrument team, inspecting GRAAL’s mechanical assembly in the integration hall of ESO’s Headquarters in Garching bei Munchen, Germany. GRAAL, which will be installed on ESO’s Very Large Telescope (VLT) on Cerro Paranal in Chile, is designed to improve the vision of the VLT’s already excellent HAWK-I camera even further.

GRAAL stands for GRound layer Adaptive optics Assisted by Lasers. It will use the technique of adaptive optics to improve the quality of images by compensating for turbulence in the lower layers of the atmosphere, up to an altitude of 1 kilometre.

GRAAL will form part of the observatory’s next generation Adaptive Optics Facility (AOF). The VLT already uses a powerful laser beam to create an artificial guide star, 90 kilometres up in the atmosphere. The current adaptive optics systems use this guide star as a reference to remove the effect of turbulence in the atmosphere, giving sharper observations, almost as though the telescope were in space.

The next generation AOF, however, will have no fewer than four laser guide stars, launched from Yepun, the VLT’s fourth Unit Telescope. GRAAL captures their light with four sensors, and then adjusts the shape of a deformable mirror up to 1000 times per second to compensate for the blurring effect of the atmosphere. This mirror — part of the AOF upgrade — is in fact a complete replacement for the 1.1-metre secondary mirror of the telescope, and will be the largest deformable mirror yet made. Combined with the multiple guide stars of the laser launching facility, it allows for better corrections over a wider field of view.

GRAAL will be attached to the High Acuity Wide field K-band Imager (HAWK-I), already installed on Yepun. Currently, HAWK-I operates without adaptive optics. Installing GRAAL will improve the sharpness of HAWK-I’s images, and reduce the exposure times needed by up to a factor of two.

After recent successful testing of the main parts of its mechanical assembly, GRAAL’s optics are now being assembled at ESO’s Headquarters. The instrument is expected to reach Paranal at the end of 2013.