Preparing for the Impact

On July 4, 2005, the NASA Deep Impact spacecraft will visit Comet 9P/Tempel 1. It will launch a 360 kg impactor that should produce a crater on the surface of the comet and a plume of gas and dust.

This experiment will be the first opportunity to study the crust and the interior of a comet. As the material inside the comet's nucleus is pristine, it will reveal new information on the early phases of the Solar System. It will also provide scientists with new insight on crater physics, and thereby give a better understanding on the crater record on comets and other bodies in the Solar System.

The scientific outcome of the experiment depends crucially on pre-impact and follow-up observations. Before the impact, it is indeed necessary to accumulate a significant amount of data so as to fully characterise the comet, in terms of size, albedo (reflectivity), rotation period, etc. It is also essential to have a good baseline of observations before the impact to unambiguously discriminate the effects of the impact from the natural activity of the comet. Due to the currently limited understanding of the structure of these dirty snowballs - which is a rather precise definition of a comet - it is indeed far from clear what the effect of the impact will be. Although the most likely model predicts the ejection of a plume and a football stadium sized crater, other model predictions vary between the comet simply swallowing the impactor (with barely any visible effect) to the eventual break-up of the nucleus.

As part of a very large international collaboration, two teams of astronomers have used ESO's telescopes over several months to do pre-impact monitoring, taking images and spectra of the comet both in the visible and mid-infrared wavebands. These teams make observations typically once per month, using either the 3.6m or the 3.5m NTT telescopes at La Silla.

ESO will also actively participate in the post-impact observations. As soon as Comet 9P/Tempel 1 is visible after the impact from Chile, and for a whole week thereafter, all major ESO telescopes - i.e. the four Unit Telescopes of the Very Large Telescope Array at Paranal, as well as the 3.6m, 3.5m NTT and the 2.2m ESO/MPG telescopes at La Silla - will be observing Comet 9P/Tempel 1, in a coordinated fashion and in very close collaboration with the space mission' scientific team. Among all observatories, the ESO La Silla Paranal Observatory will thus provide the best coverage of this one of its kind event.

The series of observations will provide unique clues to several questions related to comets. One will study in detail the chemical composition of the gas in the comet's coma, looking for fresh material from the nucleus' interior ejected during the impact. The careful study of this pristine material will provide important clues to trace the origins of comets, and so, on the formation of the solar system. The other series of observations will focus on the dust and boulders that should be released during the impact, thereby characterising the structure and composition of the nucleus. Astronomers should then finally know what these "dirty snowballs" are really made of.

First images by ESO telescopes will be obtained shortly after midnight - European time - on the night of July 4 to 5 and will be directly made available to the media. A media conference centre will also be installed at ESO Garching, Germany, with direct links to ESO's observatories, on July 4 and 5. An invitation for the media will be issued in due time.

A dedicated web site, http://deepimpact.eso.org, will provide up-to-date information on the observing programmes, on the impact and on the live coverage of the observations on July 4 and 5.

The image is a false-colour composite image of Comet 9P/Tempel 1 taken with EMMI on the NTT, during the night from 2005 May 4 to 5. North is up, East is left; the field of view is 2.5 arcmin. The exposure time is 30s in the V filter (associated to the Blue channel), 45s in R (green) and 30s in I (red). The images were obtained by M. Baes and M. Castillo, on behalf on the international team led by Olivier Hainaut (ESO, Chile). As the images in the various filters were obtained one after the other, and as the comet is moving in front of the background objects, the two stars visible in this image appear as sequences of coloured dots. The comet itself appears only very softly coloured, as its dust reflects almost uniformly the light from the Sun. 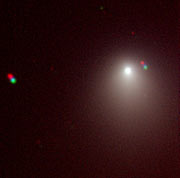 Afbeelding eso0518a
Comet 9P/Tempel 1 (NTT/EMMI)
Send us your comments!
Subscribe to receive news from ESO in your language
Accelerated by CDN77
Terms & Conditions