Behind the scenes at ESO: Showing you the road to the stars
What you’ll discover in this blog post:
Following this week’s big news that a team of scientists have used ESO’s ESPRESSO instrument to explore the atmosphere of an ultra-hot gas giant exoplanet and discover iron rain, we go behind the scenes at Paranal Observatory to find out more about what it’s like to be part of team ESPRESSO. Instrument Scientists Pedro Figueira and Gaspare Lo Curto tell us how it feels to finally see the fruits of their labours.

Q. This discovery was based on ESPRESSO’s first observations made in November 2018. How does it feel to see results like this after you’ve worked so hard on the instrument for so long?

Pedro Figueira (PF): ESPRESSO is a complex instrument and its development — from the first concept to the first light — took roughly ten years. As Instrument Scientists we participated in that process, so it's a real pleasure to see the first series of papers coming out.

Gaspare Lo Curto (GLC): It makes us feel that all our efforts were really worthwhile; all the sweat and pain are starting to pay back now!

Q. The scientists who carried out this study believe that it “rains iron” on this exoplanet. Why do you think it is important to have instruments that help us discover and remotely explore such strange new worlds?

GLC: We are well within the era of characterisation of exoplanets. We know there are many of them, and we are also learning that there are huge differences between them, even compared to all the planets in the Solar System. The characterisation of these “strange new worlds” is crucial to understanding how planets form and evolve. There are still many open questions on these important topics. 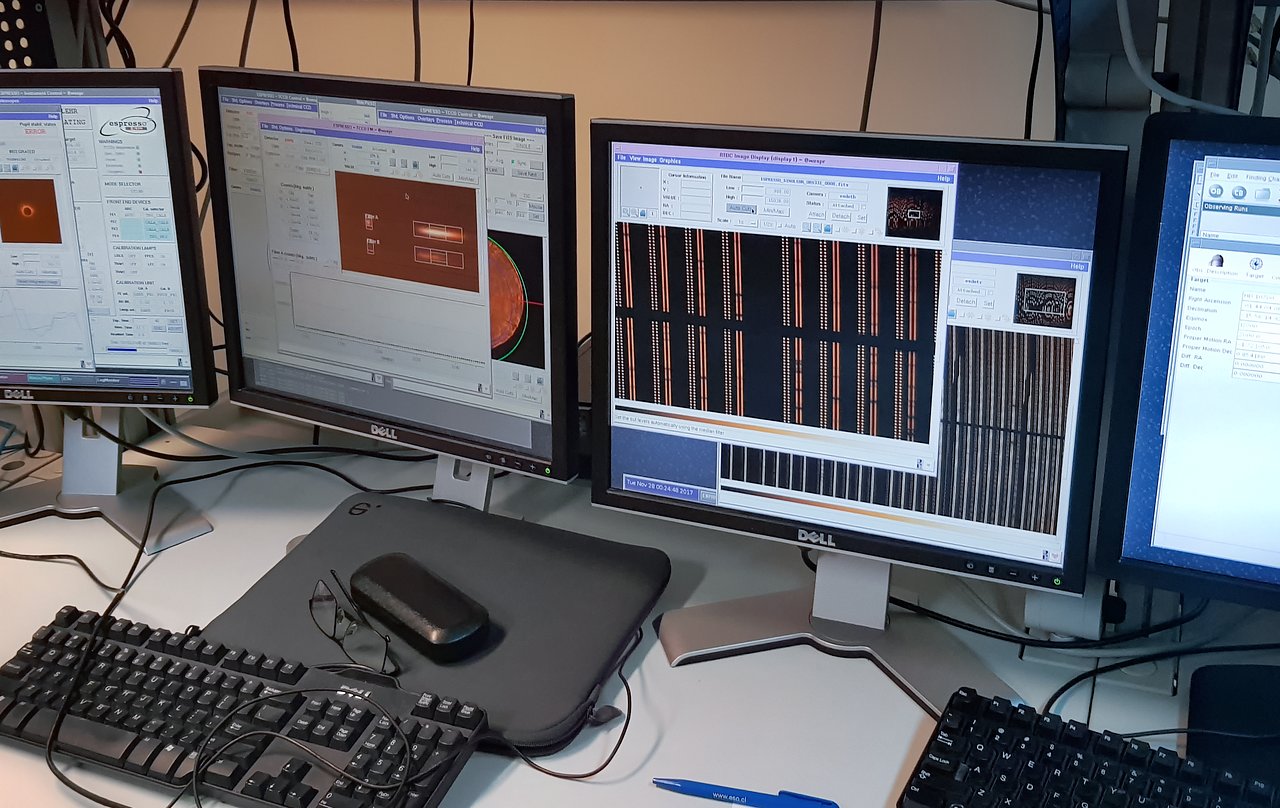 PF: ESPRESSO was built with the declared goal of detecting exoplanets with the same mass and orbital periods as Earth that orbit around Sun-like stars. However, it was soon realised that the remarkable collecting power of the Very Large Telescope (VLT) and the extreme stability of ESPRESSO made it a prime machine to study the atmospheres of all sorts of exoplanets. It is arguably the best instrument in the world for these types of studies.

Q. As Instrument Scientists for ESPRESSO, what does your day-to-day work look like?

PF: We are the stewards of the instrument, in the words of our Director of Operations, Andreas Kaufer. When an instrument is assembled by a consortium and delivered formally to ESO, an interdisciplinary team of experts (including instrumentation hardware experts, software support, engineers, technicians, operators, astronomers, etc.) takes over the instrument, taking responsibility for its operations and making sure the astronomical community has access to the full potential of the instrument. This team is called the Instrument Operations Team (IOT) and is steered by the Instrument Scientists. One of the Instrument Scientists, the IS1, is formally the coordinator of the team and responsible for the instrument's operations; this is my role. We joke — with way too much truth behind it — that things are always the IS1's fault!

Over the course of each day we monitor the operations of the instrument(s). We spend a significant fraction of our time on tasks associated with our instrument, like training our colleagues to operate it, checking data quality, and addressing the most pressing technical issues.

The bottom line is that we have to make sure the instrument is in good health and ready to operate.

GLC: The bottom line is that we have to make sure the instrument is in good health and ready to operate. When we arrive in the morning we check whether there have been reports of problems during the previous night, in which case we try to understand the origins of the problems and follow up the investigation with the engineers. Moreover, we continuously try to improve the instruments’ operations to make them more effective and efficient. In the case of ESPRESSO special care is taken concerning its thermomechanical stability: to measure the velocity of a star with a precision of 10 cm/s (almost as slow as a sloth!), the instrument must be kept extremely stable, with thermal variations well controlled. It doesn’t matter what the temperature is, but it shouldn’t change by more than a few thousandths of a degree Celsius.

Q. How have you been involved with ESPRESSO so far?

PF: On top of our Instrument Scientist duties, we were also developers and are now users of ESPRESSO. I was part of the ESPRESSO Consortium that built the instrument and am now part of the ESPRESSO Science Team that performs the observations and data analyses that aim to answer the scientific questions that form the basis of the scientific justification of ESPRESSO. The Science Team manages the Guaranteed Time Observations that the Consortium gets in return for building the instrument.

I was the Portuguese member of the Science Advisory Team during the instrument's design phase, and I am now a member of the Consortium and manager of the working group for the detection of exoplanets around stars like our own. 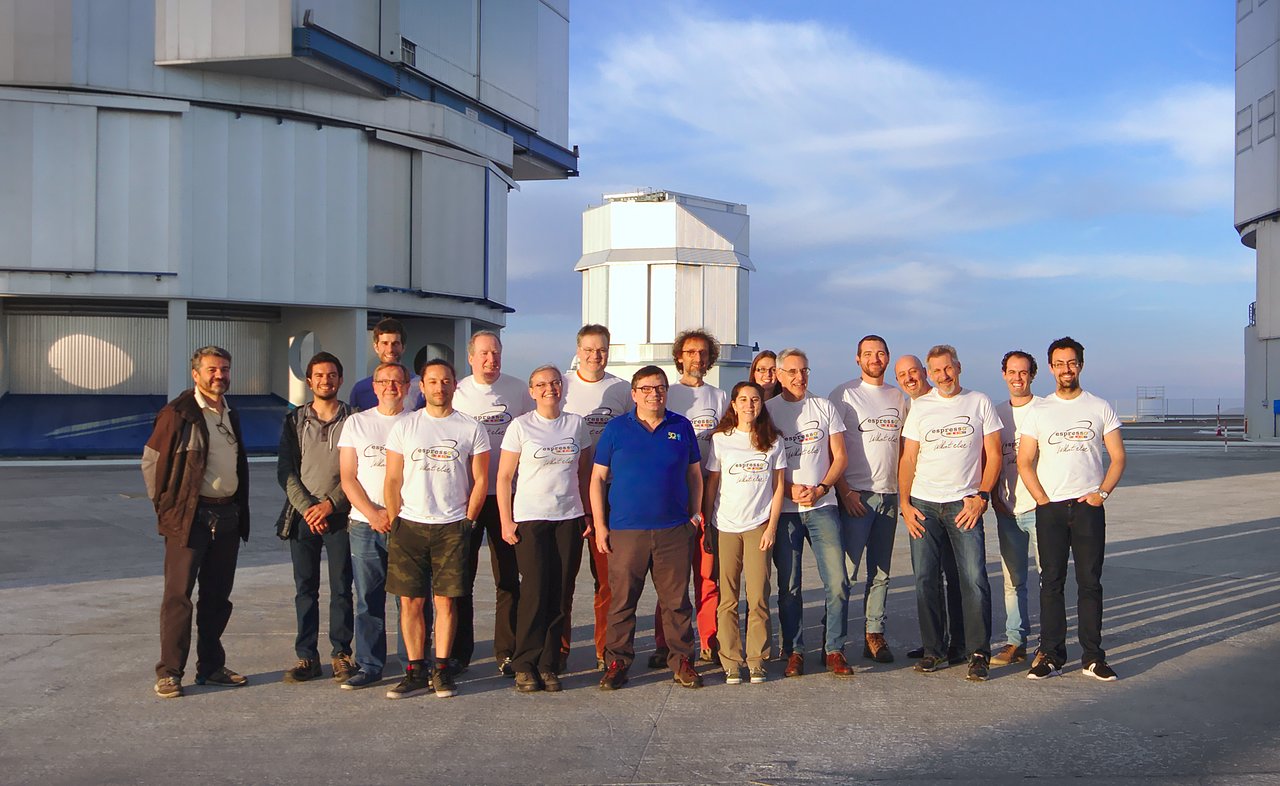 The ESPRESSO instrument team on the VLT platform at Paranal Observatory after the instrument successfully combined light from all four of the 8.2-metre VLT Unit Telescopes for the first time. This effectively made the VLT the largest optical telescope in existence in terms of collecting area.
Credit: ESO/D. Mégevand
Whether we like it or not, we are the bleeding edge, in the middle of all the action.

Q. What do you find most exciting about your job?

PF: Whether we like it or not, we are the bleeding edge, in the middle of all the action. Trying to put into operation a unique instrument like ESPRESSO is very challenging, and in the beginning we are confronted with new problems and issues almost every day. In the first few years of operations there is a lot to do while we try to get the best out a machine that is, in essence, the only prototype ever built. We do not lack excitement, we lack sleep.

Q. It’s good that you have an “ESPRESSO” to wake you up every morning then! Were there any unexpected problems in the first few months after the instrument saw first light? If so, how did you resolve them? 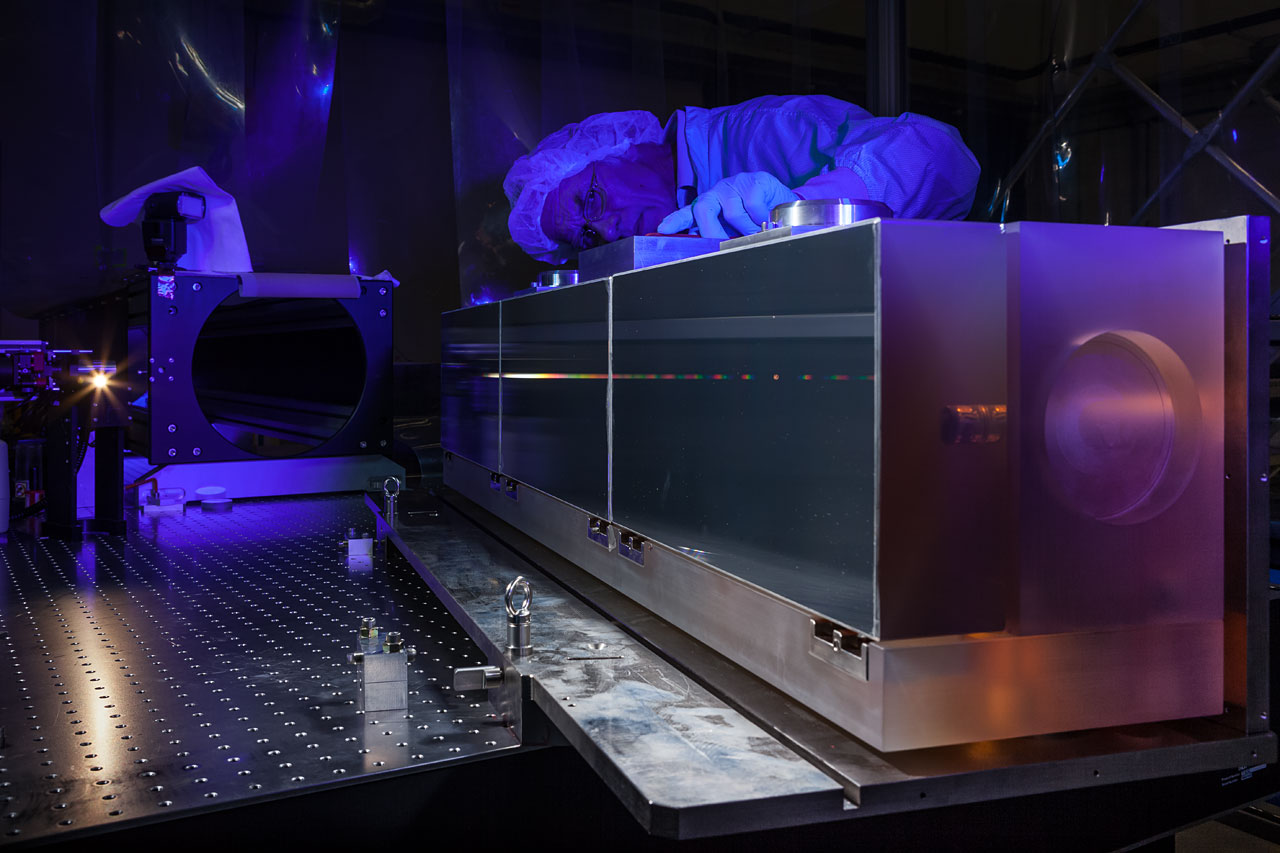 The huge diffraction grating at the heart of the ultra-precise ESPRESSO spectrograph undergoing testing in the cleanroom at ESO Headquarters in 2015.
Credit: ESO/M. Zamani

GLC: Well... there weren’t really any unexpected problems because we always expect all kinds of problems when we first start a new instrument. It’s normal! But we indeed identified various problems, and one by one these are being solved. We typically get the first indication of a potential problem from our test datasets, or even during real science observations. At that point, the next step is to perform dedicated measurements to identify and isolate the problem.

The solution depends on the nature of the problem; at times it might involve a large simulation effort, to be sure of what we can expect if we invest time and effort into putting in place a particular solution. Or it might require the construction of an entirely new part or direct work on the instrument.

In any case, a problem implies that for some days or weeks the instrument will be removed from normal scientific observations to perform the recovery actions. Some of the problems we have already solved are: the distribution of liquid nitrogen, the fibre-link transmission, the thermal stability of one of the main calibration light sources, the image quality, and the spectrograph shutters.

Solving these kinds of problems involves truly multi-disciplinary teams of astronomers, physicists, and many different types of engineers including electronic, mechanical, software and cryogenics experts.

There are two aspects that make ESPRESSO very different from HARPS, and from any other spectrograph built before.

Q. What makes ESPRESSO such a great detector and characteriser of exoplanets? How is it different to other instruments, in particular its predecessor — HARPS?

PF: There are two aspects that make ESPRESSO very different from HARPS, and from any other spectrograph built before.

The first is that ESPRESSO can receive light from any one of the 8.2-metre wide Unit Telescopes of the VLT instead of the ESO 3.6-metre telescope as HARPS does. This means that ESPRESSO receives about four times more light, allowing us to observe fainter stars or to reach the same level of precision on the stellar spectra much faster. ESPRESSO can also combine the light from up to all four VLT Unit Telescopes simultaneously, which makes it even more sensitive.

The second aspect is that ESPRESSO was built to be more stable and with more precise calibration mechanisms than its predecessors. This means that the instrument is a much more precise planet-hunting machine than we've ever seen before, allowing us to reap the advantage of a larger telescope and more precise stellar spectra.

GLC: At the spectrographic level, the strength of ESPRESSO is its “spectral fidelity” combined with its high spectral resolution. In other words, ESPRESSO is capable of resolving tiny details in the spectra of stars with the highest precision in the world. With HARPS we learned all the lessons that we could use to develop ESPRESSO.

Q. This latest discovery was made mostly with data from ESPRESSO but also a little bit from HARPS. Why is it useful to combine data from different instruments?

GLC: In this specific case the usefulness lies in the fact that when the data from two different instruments are consistent, we can be more confident about them being correct. We can confidently assume that the measurements are not due to instrument effects, at least down to the precision of the less precise instrument — HARPS, in this case.

An explanation of how ESPRESSO works. This video was released when ESPRESSO saw first light in late 2017.
Credit: ESO
ESPRESSO is a great tool that has pushed technical development to the limit. The rest is for the community to figure out.

Q. What does the future look like for ESPRESSO? What other exciting discoveries do you think we will see?

PF: Bright and frantic. ESPRESSO is a great tool that has pushed technical development to the limit. The rest is for the community to figure out. If you have a hammer in your hand, everything looks like a nail. The ESO community will find unique ways to use ESPRESSO and the ESPRESSO Science Team will use their observing time to find a planet like our own.

GLC: I look forward to the detection of the first super-Earth orbiting the habitable zone of a truly Sun-like star. If such a planet is also visible with the transit technique it would be excellent because we could optimise the time investment on ESPRESSO, and we could use ESPRESSO to characterise its atmosphere. However, ESPRESSO is offered to the whole astronomical community, which is very rich in ideas. For sure there will be discoveries that will be exciting and unexpected at the same time.

Pedro Figueira has been working at ESO since 2018 and is currently the Instrument Scientist 1 (IS1) for ESPRESSO. He carried out his PhD at the Observatory of Geneva with Michel Mayor and Francecso Pepe, specialising in deriving precise radial velocities. When not in the middle of a desert, Pedro enjoys Lindy Hop and craft beer.