Behind the scenes at ESO: Showing you the road to the stars
What you’ll discover in this blog post:
La Silla became ESO’s first observatory when it opened in 1969. Since then, the majestic gathering of telescopes in the Chilean desert has led to an enormous number of scientific discoveries, with on average 300 refereed publications attributed to La Silla telescopes every year. To mark the 50th anniversary of the observatory, we find out what it takes to run such an impressive place from Ivo Saviane, who has been Site Manager since 2013.

Q. Could you begin by telling us what you love or what inspires you about La Silla?

A. The very existence of La Silla as a string of domes in the middle of the Atacama Desert is just incredible, but I also wonder at the extraordinary science that has been (and is still being!) carried out here. For example, two La Silla telescopes were used to find the most remote gamma-ray burst, the observatory played a key role in the Deep Impact campaign, the ESO 3.6-metre telescope was used to find potentially-habitable exoplanet Proxima b, and the TRAPPIST-south telescope was used to detect planets around TRAPPIST 1.

And because La Silla hosts telescopes and instruments spanning five decades, there is a huge amount of history here. This allows me to set more recent ESO achievements in good evolutionary perspective.

Q. So what does a typical day in your life as La Silla Site Manager look like?

A. My main role is to be the hub of an incessant information flow, which happens mostly by email, but also through meetings and daily encounters with staff — for example coffee breaks are a valuable way to keep an eye on observatory life! Input is received through these channels, and most of the time follow-up actions are triggered.

Many actions are recurring and plannable but others are a consequence of the complex dynamic nature of an observatory: safety concerns arise, the weather can get nasty, people become sick, visitors might be delayed or not arrive, instruments and telescopes can suffer a myriad of technical hiccups, transportation vehicles can break down, staff leave and must be replaced, training activities must be organised, hardware is imported and exported, requests are received to install new facilities on site, etc.

Some of these issues can be solved internally but often help is required from across ESO. In addition, some actions must be coordinated with other observatories, for example fighting light pollution, maintaining access roads, and exchanging instrumentation. This means it’s vital to maintain good relationships with competing facilities in Chile.

My typical day thus consists of processing emails, holding internal meetings, contacting other partners, and deciding on actions to be carried out. These might not sound like the most interesting tasks, but they are vital for La Silla to continue to be such a productive observatory.

Q. This year is the 50th anniversary of the inauguration of La Silla. How has La Silla changed over the time that you have known it?

A. My first time at La Silla was in 1993, when I arrived at the New Technology Telescope (NTT) for an observing run. This was only four years after its inauguration as “The Best Telescope Yet”, as Sky & Telescope put it on the cover of their September 1989 issue. The NTT marked the peak of La Silla’s golden age, but in 1987 the ESO Council had already decided to build the Very Large Telescope (VLT), likely on the Paranal mountain. It was then natural that focus and resources would move away from La Silla, so the observatory went through a series of reductions in scope.

An observatory with no resident astronomers is something rather unusual, and at that time the change sparked some outrage in the astronomical community. 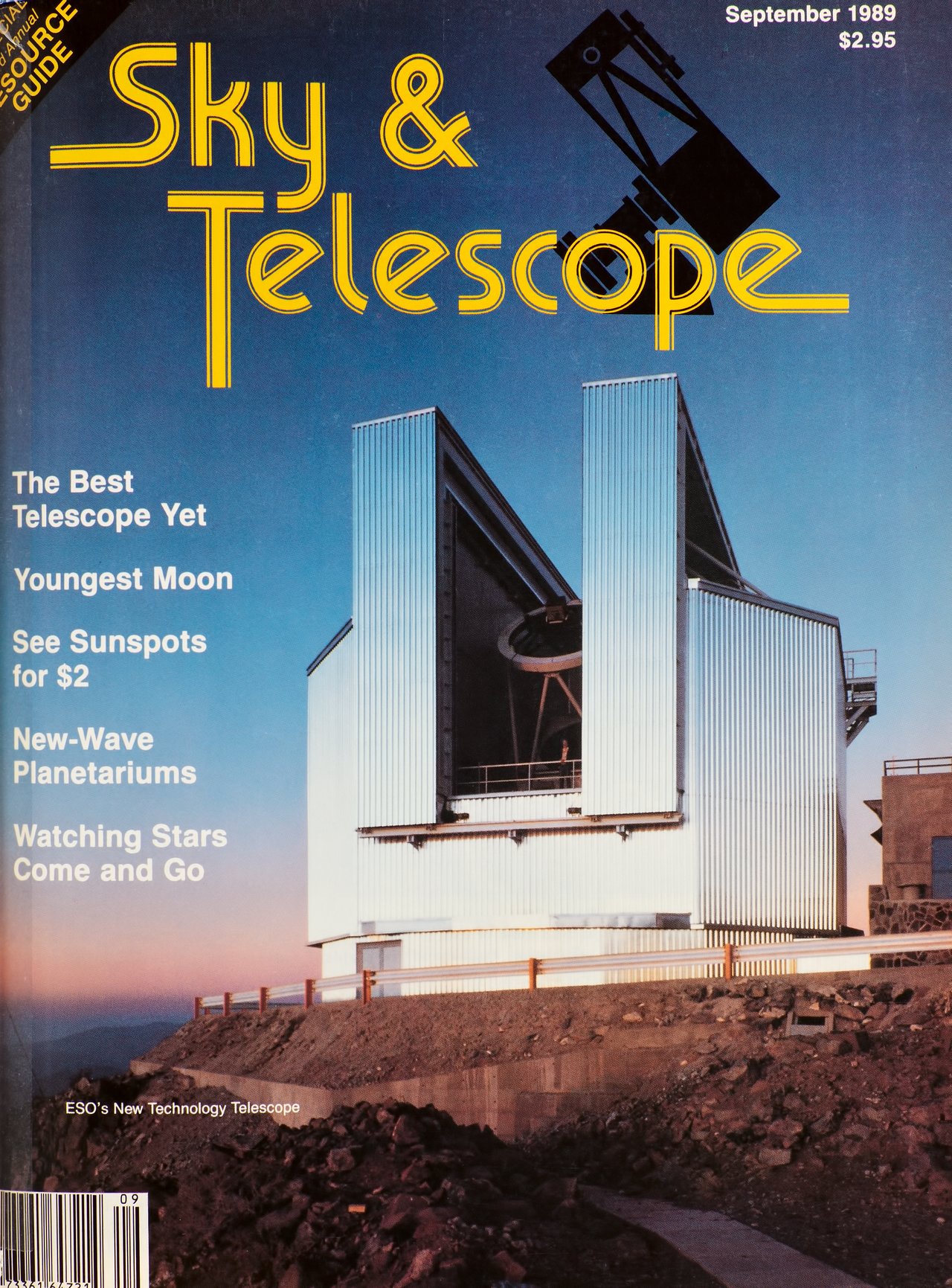 Cover of the September 1989 edition of Sky & Telescope, featuring “The Best Telescope Yet”, the New Technology Telescope.
Credit: ESO/sky & telescope

But since then, the biggest change I witnessed was in 2009, when the La Silla 2010+ scheme was inaugurated: among a number of changes, the decision was made not to have support astronomers on site to help visitors during their observing runs or carry out observations in so-called “service mode”. An observatory with no resident astronomers is something rather unusual, and at that time the change sparked some outrage in the astronomical community. However, over time people have become accustomed to it and complaints about missing scientific support are very rare these days.

The drastic reduction in staff after 2009 means that now only a few people inhabit an urbanised site meant for a much larger population. This might conjure up scenes from a science fiction film, but the remaining staff must have continuous direct interaction with each other in order to keep the place running, so team spirit has strengthened. Besides, with so few people, everyone’s had to develop skills beyond their original experience, which can make daily work more interesting.

One might also remark that astronomy has moved away from the kind of individual or small group efforts that dominated during most of the last century. An ever-growing mass of data, and the need to gather them over the whole spectral range and resolution, has triggered a trend where it is now more likely that high-impact papers are the results of large collaborations. In this context it is good to see a steady flow of young and enthusiastic researchers populating the La Silla control room every night.

I personally think that La Silla’s smaller telescopes could survive only by joining forces and eventually establishing a worldwide network.

The future of La Silla depends on the will of ESO and its community to keep operating the observatory's two main telescopes; the NTT and the ESO 3.6-metre. In the upcoming age of 10-metre and 40-metre optical-infrared telescopes I personally think that La Silla’s smaller telescopes could survive only by joining forces and eventually establishing a worldwide network. But at the moment we are expecting two new instruments — SOXS for the NTT and NIRPS for the ESO 3.6-metre telescope — and several new hosted projects are about to start operations. Therefore I expect that the nature of La Silla will not change much in the next decade or so.

If I had to pick some highlights, the changing natural environment would be at the top.

Q. What are your most special memories from your time at La Silla so far?

A. La Silla is such a unique place that all time spent there is somehow special. I think it is no coincidence that, given the choice, most visiting artists in the past selected to stay at La Silla over other ESO sites.

But if I had to pick some highlights, the changing natural environment would be at the top: the extraordinary view of the flowering desert, when hills turn green and great swaths of magenta flowers appear; the green flash before the sun disappears below a razor-sharp horizon; snow covering the landscape; shadows of clouds on brightly coloured mountains; the occasional rain that fills the air with its scent; herds of guanacos browsing the bushes; majestic condors circling the dome of the 3.6-metre telescope; desert foxes watching you from a distance.

And over all this sweeps the magnificent night sky. On my first observing run, I had fallen asleep whilst been driven up to the summit after an exhausting journey. As I opened the door of the vehicle and looked up, I almost fell back in awe at the view of the Milky Way shining overhead. I felt overwhelmed by the grandiosity of the sight, but at the same time the urge to understand what was happening in front of my eyes was spurred beyond resistance. It seems impossible that somebody could look at the night sky at La Silla and not have the same feeling! 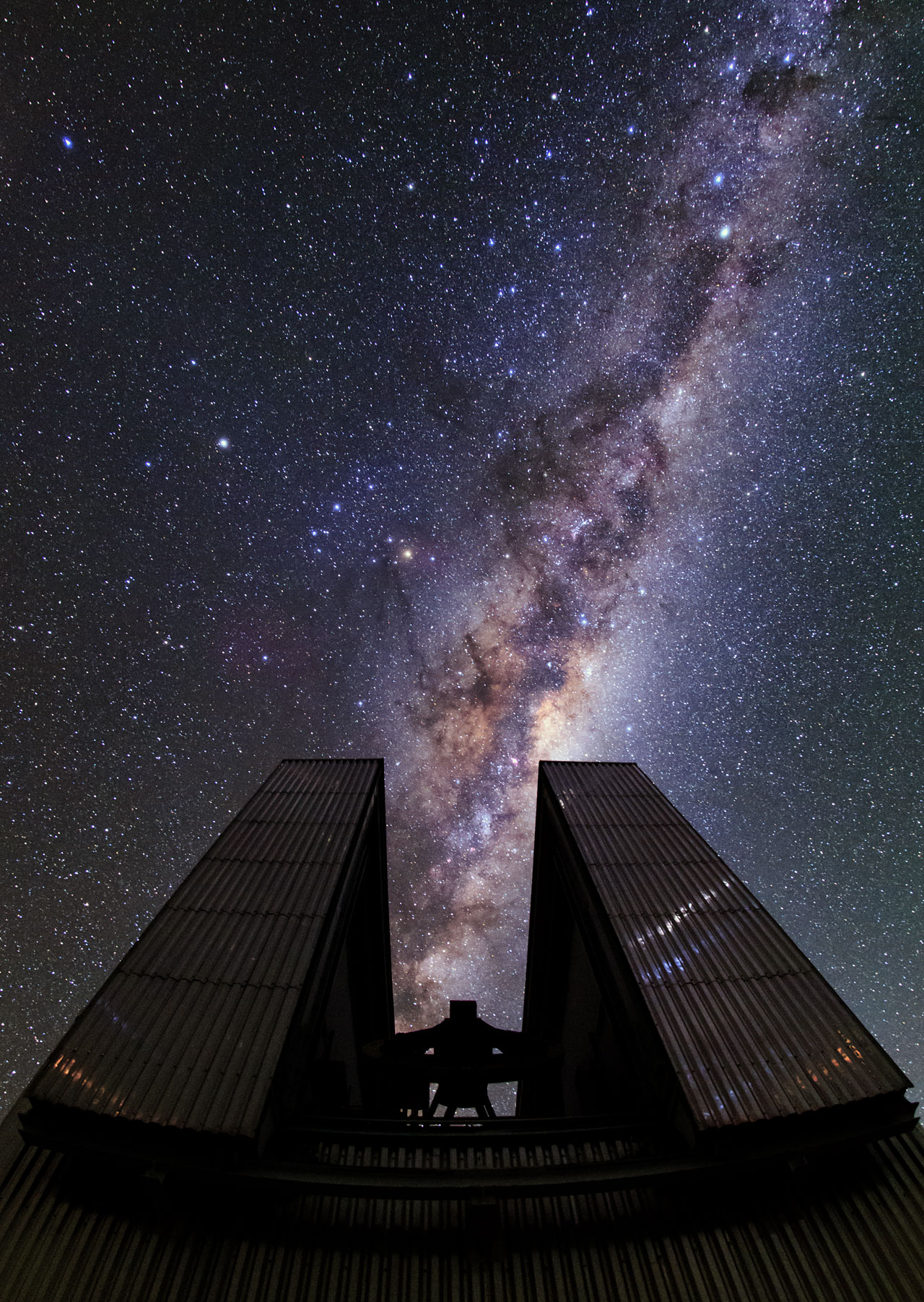 A swath of stars appears to cut the New Technology Telescope in two. The majestic telescope enclosure aligns perfectly with the Milky Way’s central region.
Credit: ESO/B. Tafreshi (twanight.org)
I almost fell back in awe at the view of the Milky Way shining overhead.

But back to Earth, it takes some special characters to adapt to such an unusual lifestyle, where you work and live with the same people in a confined place for several days in a row. Thus inevitably, memorable conversations and stories come alive, so some of my best memories are related to these aspects of the social life at La Silla. In particular I remember fondly the midnight meals shared with visiting and support astronomers from all around the world. The dimly lit dining room helped create a feeling of sharing and good spirit, and life experiences were shared from different cultural backgrounds, enriching everybody's souls.

Q. La Silla is home to a large (and growing!) number of telescopes. Do you have a favourite?

A. In the past, I spent many nights as an observer or support astronomer working with the NTT, so that is high on my list. However my dearest memory rests with the MPG/ESO 2.2-metre telescope: in September 1996 I was there observing a dwarf galaxy in the constellation of Phoenix, and I was hoping that the new EFOSC2 detector, with its better response in the blue part of the spectrum, would allow me to resolve a special class of stars that are key to inferring the age of a stellar population. At that time we were still observing in control rooms inside each telescope building, so I launched very long exposures and went out to look at the sky.

I could see the open dome slit and the top ring of the telescope pointing towards “my” galaxy, as it slowly tracked the motion of the stars, making a subtle hum, which was interrupted every few minutes by a metallic sound coming from the dome as it changed position. These visual and acoustic impressions seemed to announce that the secrets of the galaxy would soon be revealed to me, and I felt almost at one with the instrument and the night sky. You can imagine my excitement when I could see those stars in the data, which sealed that September night into my memory. 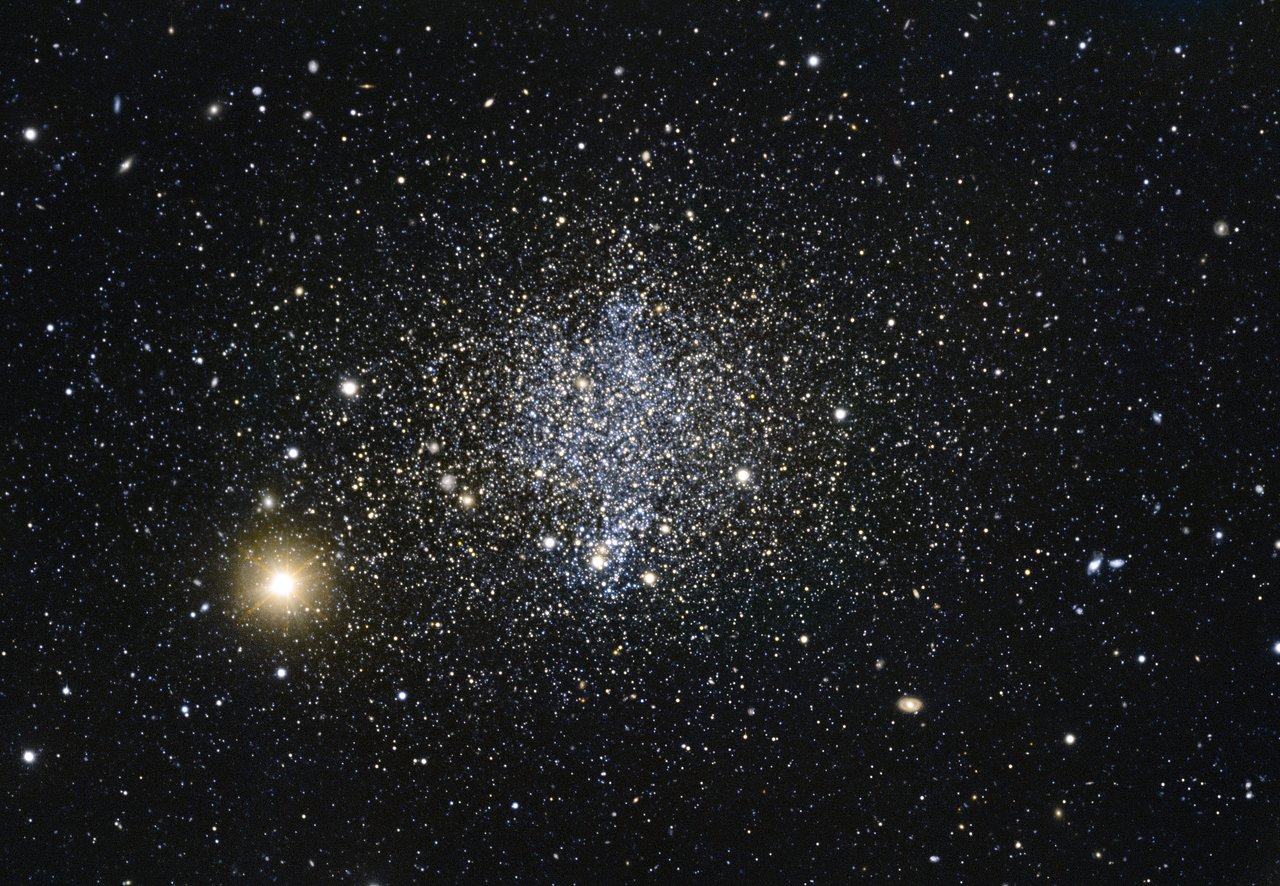 After finding out a lot about ground- and space-based crowded-field photometry during his PhD, Ivo Saviane started as an ESO fellow in 2001, before becoming support astronomer of the TIMMI2 instrument on the ESO 3.6-metre telescope. Over time he supported more and more instruments until he oversaw almost all of those at La Silla Observatory. In 2008 Ivo was appointed head of science operations, a position which lasted until he moved to Paranal in 2009: there he was instrument scientist first for FORS2, and then for KMOS. Finally in 2013 Ivo moved back to La Silla to become Site Manager.