Behind the scenes at ESO: Showing you the road to the stars
What you’ll discover in this blog post:
The new Director General Xavier Barcons kicks off the brand new ESOblog as he explains the importance and diversity of the many telescopes that are in operation, under construction or planned at the three ESO Sites. This collection of telescopes offers amazing views of the Universe through different parts of electromagnetic spectrum, looking at the warm, the cold and the most energetic sides of cosmos.

Greetings and welcome to the ESOblog!

Today, 1 September 2017, is my first day as the new Director General of the European Southern Observatory and also the Friday chosen for the start of a new weekly channel of communication from ESO, the ESOblog (which will contain much more than just my musings). I am very excited to be taking the helm of this world-leading astronomical organisation at such a thrilling time — a time of scientific aspirations, progress and challenges. I will be using this blog to occasionally share some of my thoughts with you as ESO continues to push into this new era of astronomical research.

To begin, I would like to discuss a topic close to my heart, coming as I do from X-ray astronomy but having also spent many dozens of nights observing with optical telescopes in ground-based observatories: why astronomers need so many different types of telescopes. The banner image of the Centaurus A galaxy accompanying this text illustrates it nicely: in visible light (partly obscured by cold molecular gas) we see where its stars are, but when it is observed in radio, submillimetre or X-rays we can see the effects of a growing super-massive black hole lurking at the centre of the galaxy. These observations require different types of telescopes, both on the ground and in space.

If you follow ESO on social media or read our press releases, you’ll be familiar with the names of Paranal, La Silla and Chajnantor, our three current observatory sites in the mountainous part of Chile’s Atacama Desert. These three sites support, or will in the near future support, an amazing number of unique telescopes — no fewer than 22, depending on how you count them. Many are already in operation and some are under construction (see this page for an overview). Each has instruments designed to capture a different wavelength range of the many types of light that astronomical objects emit. Some of the telescopes have glass or glass-ceramic mirrors, and some have parabolic metal antennas. Some are single, while some are arrays of 4 (like the VLT or the ATs) or even 66 (like ALMA) individual telescopes or antennas that combine to function as one large telescope . Some are small, and some are much larger — the Extremely Large Telescope will be simply enormous. Some are operated by ESO, and some by national entities or by partnerships which include ESO. They are all part of the ESO family, each looking at a specific face (or wavelength range) of the Universe. Together with other telescopes on the ground and in space — particularly those operated by our sister organisation the European Space Agency — these facilities allow astronomers to retrieve information about the huge variety of physical phenomena that occur in celestial objects, enabling them to make astounding discoveries.

Exoplanets in Transits and their Atmospheres (ExTrA)

Looking to the future, we are working towards hosting the southern station of the Cherenkov Telescope Array (CTA) at our Paranal-Armazones Observatory. CTA will observe very high-energy (VHE) gamma-rays (in the TeV energy range), a notoriously difficult region of the electromagnetic spectrum to observe from Earth and practically impossible from space. VHE radiation reveals the most spectacularly energetic phenomena in the Universe; each gamma-ray rivals in energy the fastest protons that humankind has been able to accelerate at CERN, another sister organisation to ESO. Upon conclusion of the required CTA agreements, ESO will further expand its multi-wavelength character.

Only specific atmospheric “windows” are available to ground-based telescopes, as the atmosphere blocks light at many different wavelengths. The brown areas represent wavelength ranges blocked by the atmosphere.
Credit: ESA/Hubble (F. Granato)

Unlike in other disciplines of science, astronomers rarely have access to the objects they study — we can’t exactly examine a star or galaxy in the lab. Instead, we must rely only on what we can observe rather than experimenting with our objects of study, so our telescopes are crucial. To learn about celestial bodies, astronomers primarily analyse the electromagnetic radiation — the light — given off by the object, as this is the main source of information that we have access to. You can think of electromagnetic radiation as waves travelling through space, and as such they are characterised by their wavelength. The wavelength determines the energy of the radiation, and each wavelength region requires a different type of telescope to observe it.

Visible light is the most familiar type of electromagnetic radiation to us, and not surprisingly it was the first for which telescopes were invented and developed. Today, optical telescopes (like ESO’s VLT or ELT) collect the light with glass mirrors covered with an extremely thin and uniform layer of reflecting material (typically aluminium or silver). Radio waves, from centimetre to millimetre and submillimetre wavelengths, are captured by antennas covered by reflecting metal plates (as in the case of APEX or ALMA radio telescopes). X-rays can (fortunately) only be detected from space, and modern orbiting X-ray telescopes utilise metal-coated layers almost parallel to the line of sight to form X-ray images in the focal plane. Low-energy gamma-rays are also detected from space, using various techniques that enable astronomers to trace the direction and energy of every incoming gamma-ray. In the case of VHE gamma-rays (as seen by CTA) we detect the by-products of their disintegration in Earth’s atmosphere, seen as flashes of blue light (known as Cherenkov light). All these different types of telescopes are needed for modern astronomical research. 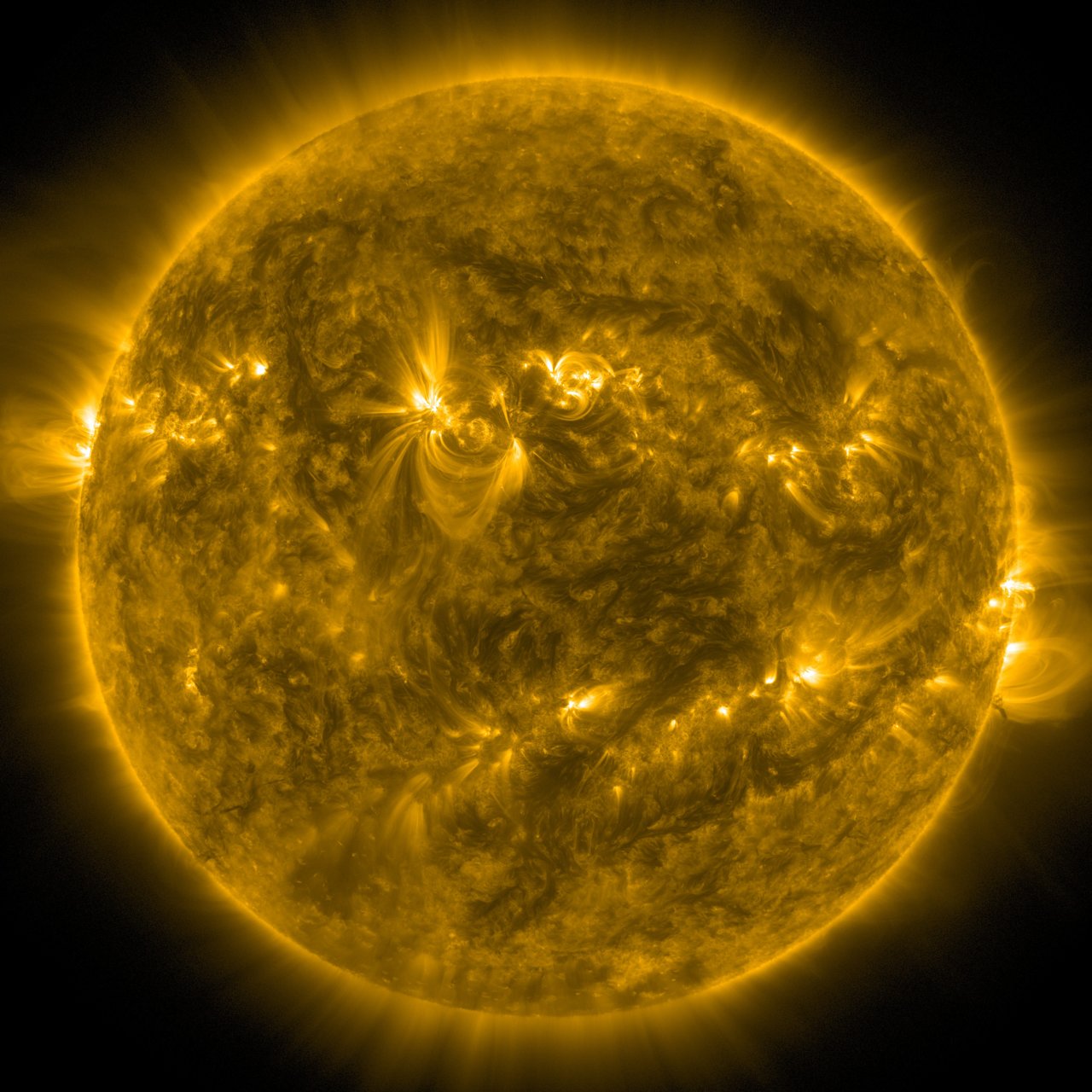 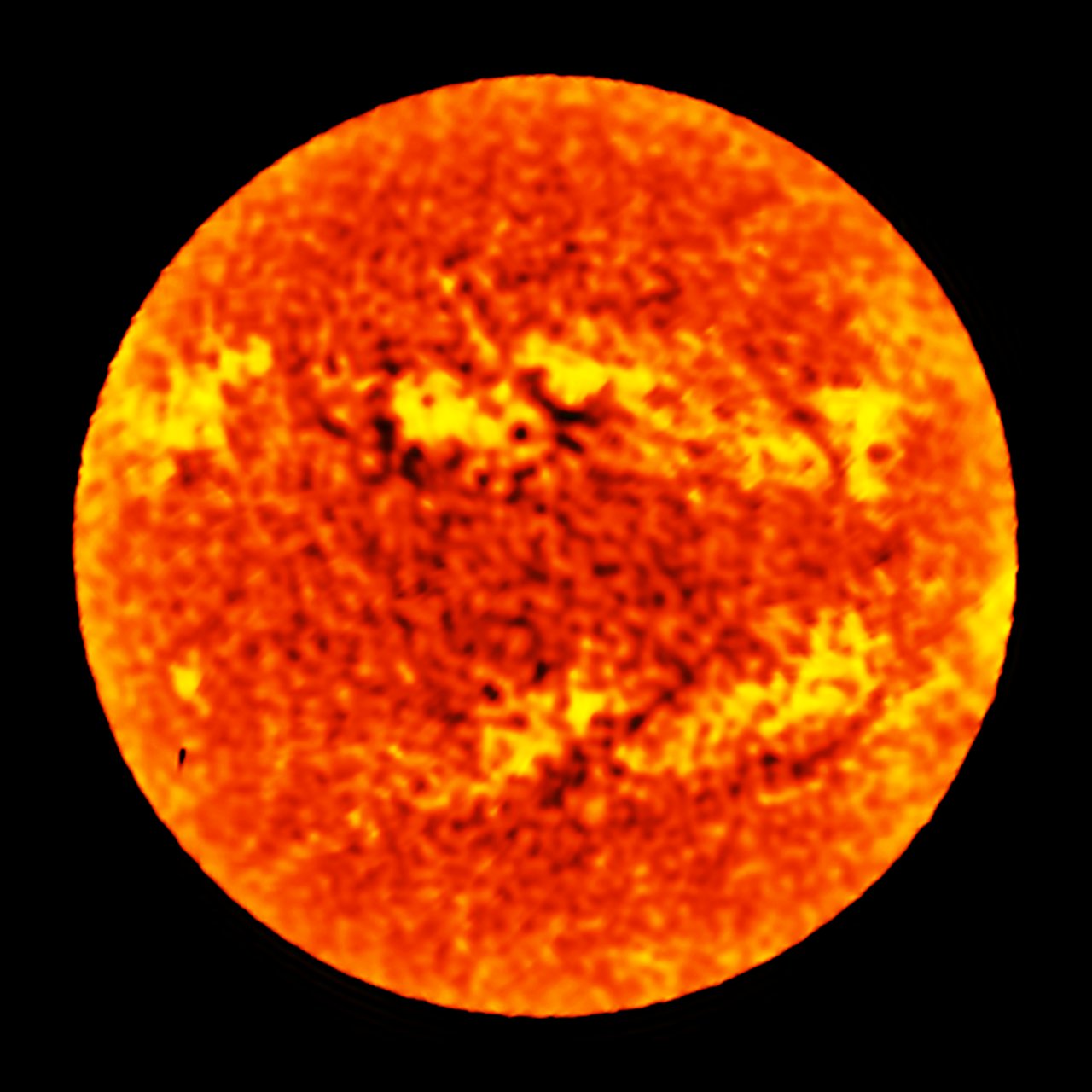 This interactive comparison shows an image of the solar disc at ultraviolet wavelengths from the NASA Solar Dynamics Observatory (left), along with observations by ALMA at millimetre wavelengths (right).
Credit: NASA/SDO, ALMA

The view of the Universe revealed as each new window on the electromagnetic spectrum has been opened has surprised astronomers with a previously unsuspected variety and richness of phenomena. Stars, galaxies and other celestial objects emit energy over a vast range of wavelengths, each wavelength region containing valuable and complementary information. The early stages of star formation, for example, occur in thick clouds of gas and dust that can only be penetrated by infrared radiation. Most actively accreting supermassive black holes are also surrounded by vast amounts of obscuring gas, and can only be spotted by observing the energetic X-rays or gamma-rays that emerge. Cold gas, an essential ingredient of galaxies and the source of material to form stars, does not shine at optical wavelengths but is very evident in millimetre and submillimetre observations. Studying an object in many different types of light gives astronomers much more nuanced insights into the very often complex underlying physical processes at play. 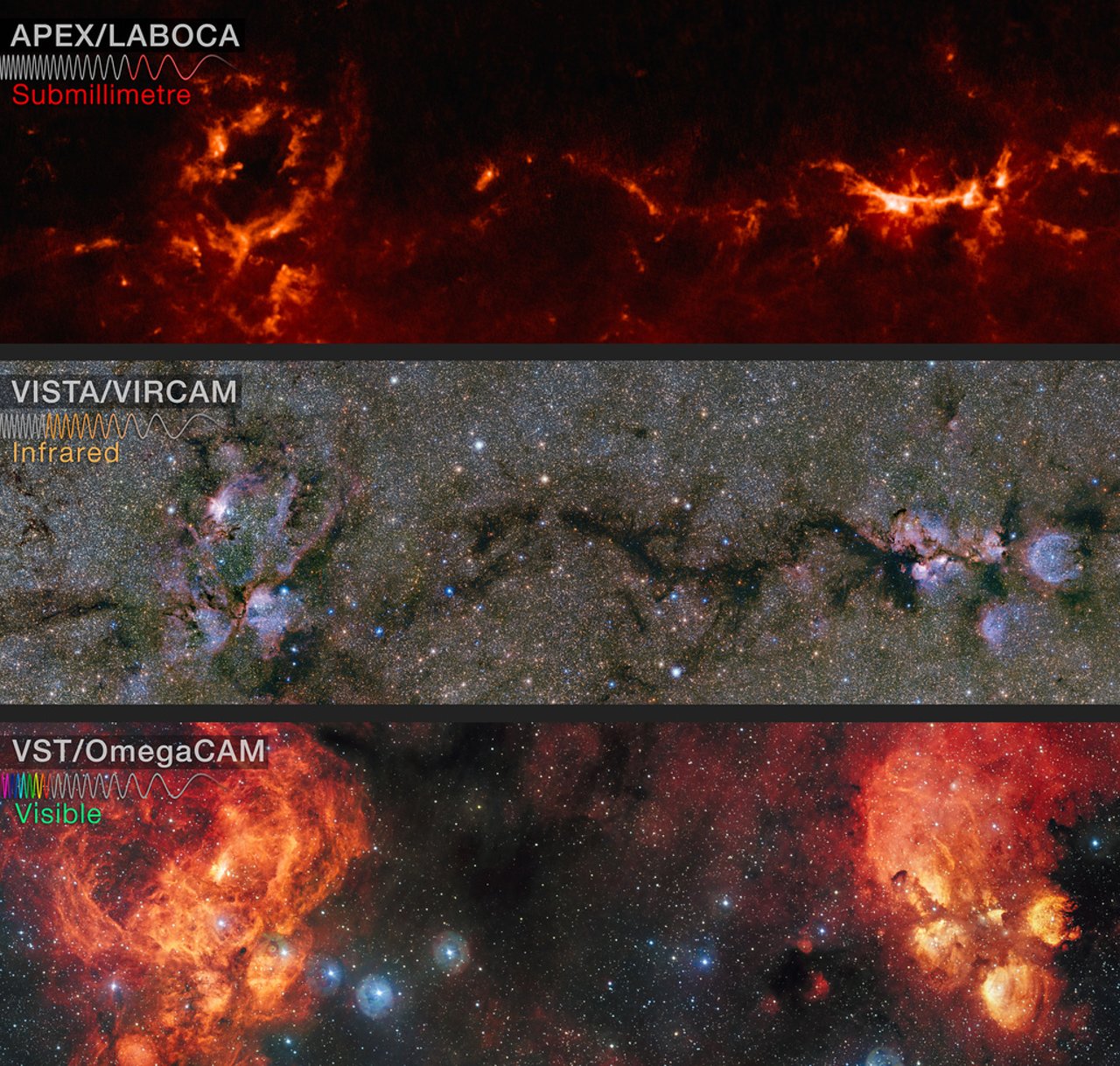 This comparison shows the area around the Lobster and Cat’s Paw nebulae observed at different wavelengths. Top panel: submillimetre wavelengths seen by APEX. Middle panel: near-infrared wavelengths seen by ESO’s VISTA infrared survey telescope; note that regions appearing as dark dust tendrils here show up brightly in the APEX view above. Bottom panel: visible light as seen by the VST, where most of the stars are hidden from view by dusty structures.
Credit: ESO/ATLASGAL consortium/VVV Survey/D. Minniti.
Telescopes are crucial to modern astronomical research, and we expect ever more spectacular multi-wavelength observations as we continue to push the technological boundaries with our current and future telescopes here at ESO.

By combining ESO’s powerful suite of telescopes with other telescopes located both around the world and in space, astronomers can build up a complete and accurate picture of planets, stars, galaxies and our Universe as a whole. Telescopes are crucial to modern astronomical research, and we expect ever more spectacular multi-wavelength observations as we continue to push the technological boundaries with our current and future telescopes here at ESO. 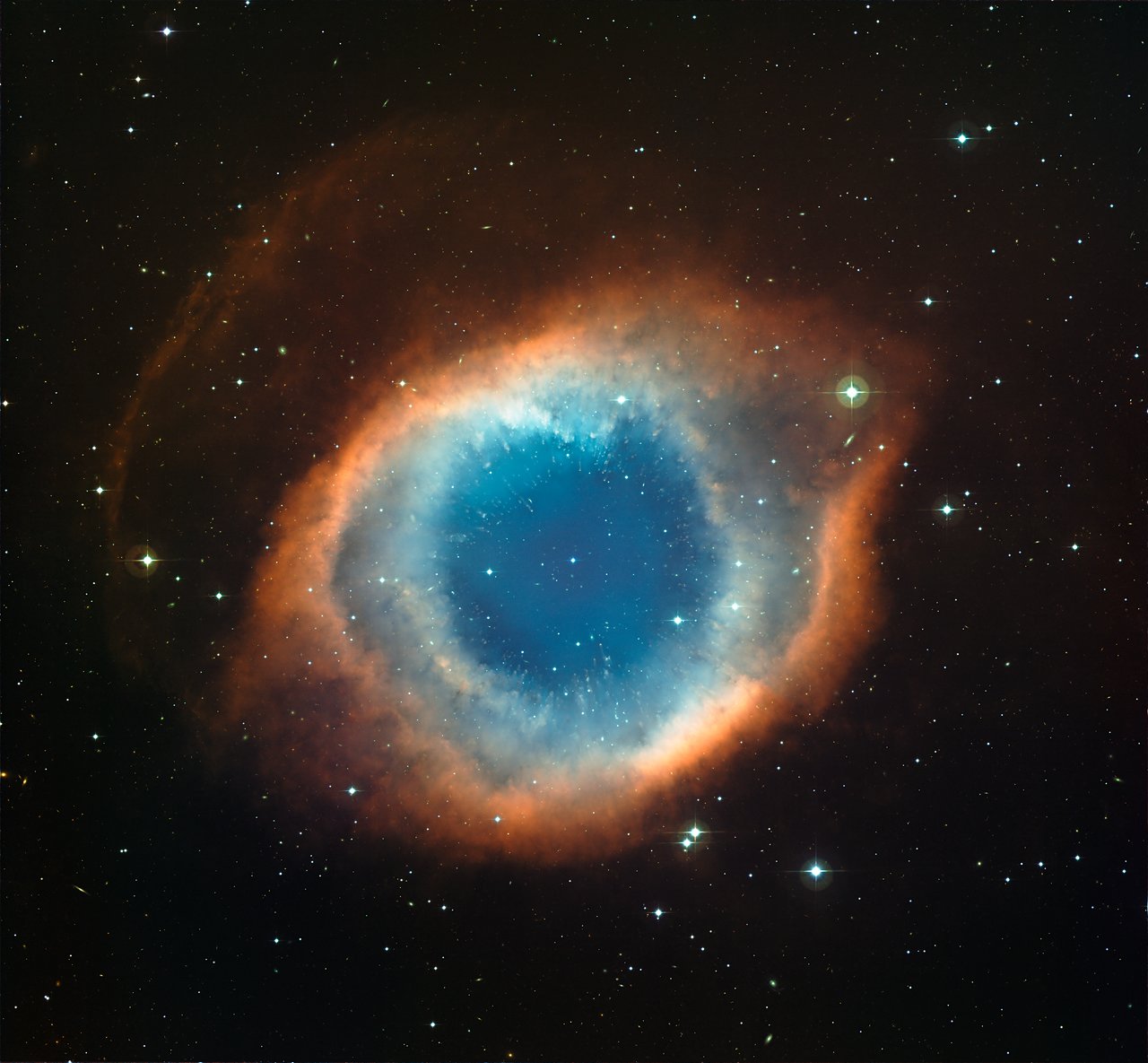 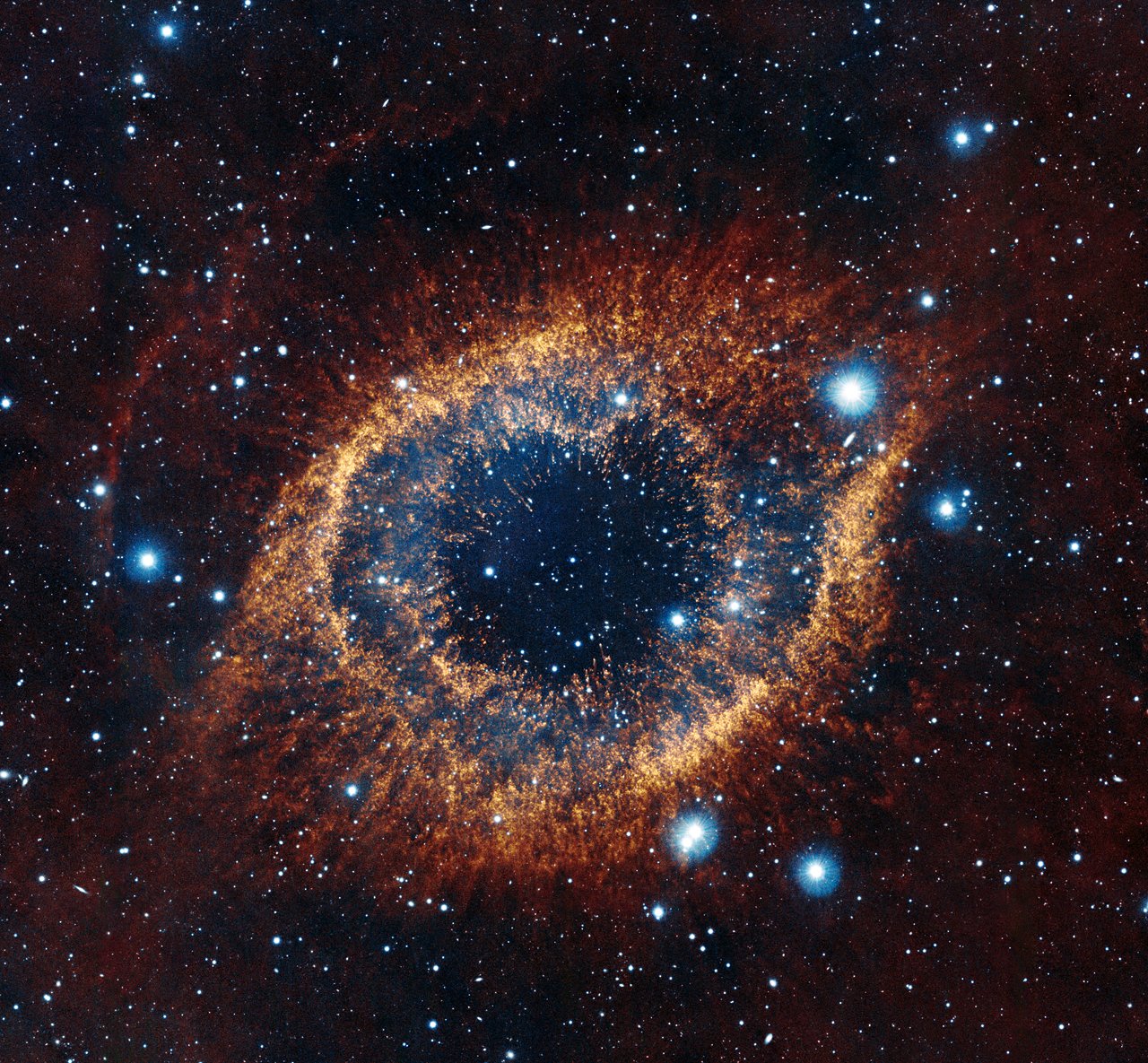 This interactive comparison shows a view of the Helix Nebula acquired with the VISTA telescope in infrared light (right), along with a more familiar view in visible light from the MPG/ESO 2.2-metre telescope (left). The infrared vision of VISTA reveals strands of cold nebular gas that are much less prominent in visible light images.
Credit: ESO/VISTA/J. Emerson. Acknowledgment: Cambridge Astronomical Survey Unit