Behind the scenes at ESO: Showing you the road to the stars
What you’ll discover in this blog post:
In order to understand some of the weirdest and most wonderful phenomena in the Universe, scientists rely on the Lambda Cold Dark Matter (LCDM) model. This model assumes the existence of dark matter and dark energy to explain things like the cosmic microwave background, the structure of galaxies, the abundances of elements and the accelerating expansion of the Universe. But recent research hints that this model might not explain everything. Astronomers have found a plane of dwarf galaxies orbiting Centaurus A, one of our closest galaxies — a discovery that challenges the long-held LCDM model. One of the team members is ESO astronomer Federico Lelli, so we chatted with him to find out more.

Q: Firstly, what is a dwarf galaxy and why did you want to study them?

A: Dwarf galaxies are the most numerous and most common types of galaxies in the Universe, but they are smaller and less massive than galaxies like our own Milky Way. The Milky Way, for example, contains about 100 billion stars, while dwarf galaxies may contain anywhere from a few thousand to “only” a billion stars. One famous example of a dwarf galaxy is the Small Magellanic Cloud, which is visible to the naked eye from the Southern Hemisphere. Dwarf galaxies are important in many aspects of astronomy, but to me they are particularly interesting because they can be used to test the currently most popular cosmological model, the Lambda Cold Dark Matter (LCDM) model, in which the mysterious dark matter and dark energy constitute more than 95% of the total mass-energy budget of the Universe.

Q: How can dwarf galaxies test the cosmological model?

A: First of all, dwarf galaxies are thought to be heavily dominated by dark matter because they show large mass discrepancies. Let me explain what that means. By studying the motions of stars and gas within dwarf galaxies and using Newton’s gravitational law, we can estimate their total mass. But when we compare this number to the actual mass we see in stars and gas, the two numbers are vastly different — by a large factor, from tens to thousands depending on the object. We interpret this as evidence for large amounts of unseen dark matter inside dwarf galaxies. These galaxies are therefore prime natural laboratories to test different dark matter models or alternative gravity theories.

Over the past ten years, however, people realised that we can also test our current cosmological model by looking at the distribution of dwarf satellites around their “host” galaxies and comparing that with the prediction of computer simulations based on the LCDM model.

Q: Can you explain in more detail how this is done?

A: According to the LCDM model, galaxies form at the centres of halos of dark matter. Using supercomputers, theoreticians can simulate the formation and growth of dark matter halos over time, from the Big Bang to the present day. It turns out that massive dark matter halos, which host bright galaxies, are generally surrounded by many smaller dark matter halos, which should host dwarf galaxies. The small halos are distributed in a random, nearly spherical fashion around the big one and move in a chaotic way, like bees around a hive. This is a neat prediction that can be tested by actually looking at the motions and positions of dwarf galaxies out in the Universe.

Q: Have other researchers looked at this before?

A: Sure, and the first results raised a big scientific debate. Arguably, the best-studied galaxies in the Universe are the Milky Way and its big neighbour, the Andromeda Galaxy. Both galaxies are surrounded by several dwarf satellites. But early research realised that these dwarfs are not distributed in a random way, as predicted by cosmological simulations. It was found that the satellites of the Milky Way lie in a narrow plane, which is perpendicular to the Milky Way’s disc, and they also seem to rotate within this plane — sort of like the planets around the Sun, except the orbits of dwarf galaxies are way more complex and uncertain. Imagine a pancake-like disc of dwarf galaxies, spinning around the Milky Way.

Imagine a pancake-like disc of dwarf galaxies, spinning around the Milky Way

Co-rotating planes of satellite galaxies are rare in cosmological simulations, occurring in less than 1% of simulated central dark matter halos, so people naturally thought that the Milky Way must be a bit of a weirdo. It was later discovered that the Andromeda Galaxy also hosts a plane of satellites, making this galaxy just as much of a weirdo as our own. At this point, people started to wonder whether the cosmological predictions are actually correct, or whether the Local Group of galaxies — including the Milky Way and the Andromeda Galaxy — is atypical and shouldn’t be used to test cosmology.

Q: How have you and your collaborators tried to answer these questions?

A: We decided to look at satellite galaxies outside the Local Group to test whether the Milky Way and Andromeda are indeed atypical. We started with Centaurus A (also known as Cen A), which is a big elliptical galaxy in the constellation of Centaurus, about 13 million light-years away. It’s surrounded by 31 dwarf satellites, plus another 15 candidates awaiting confirmation. 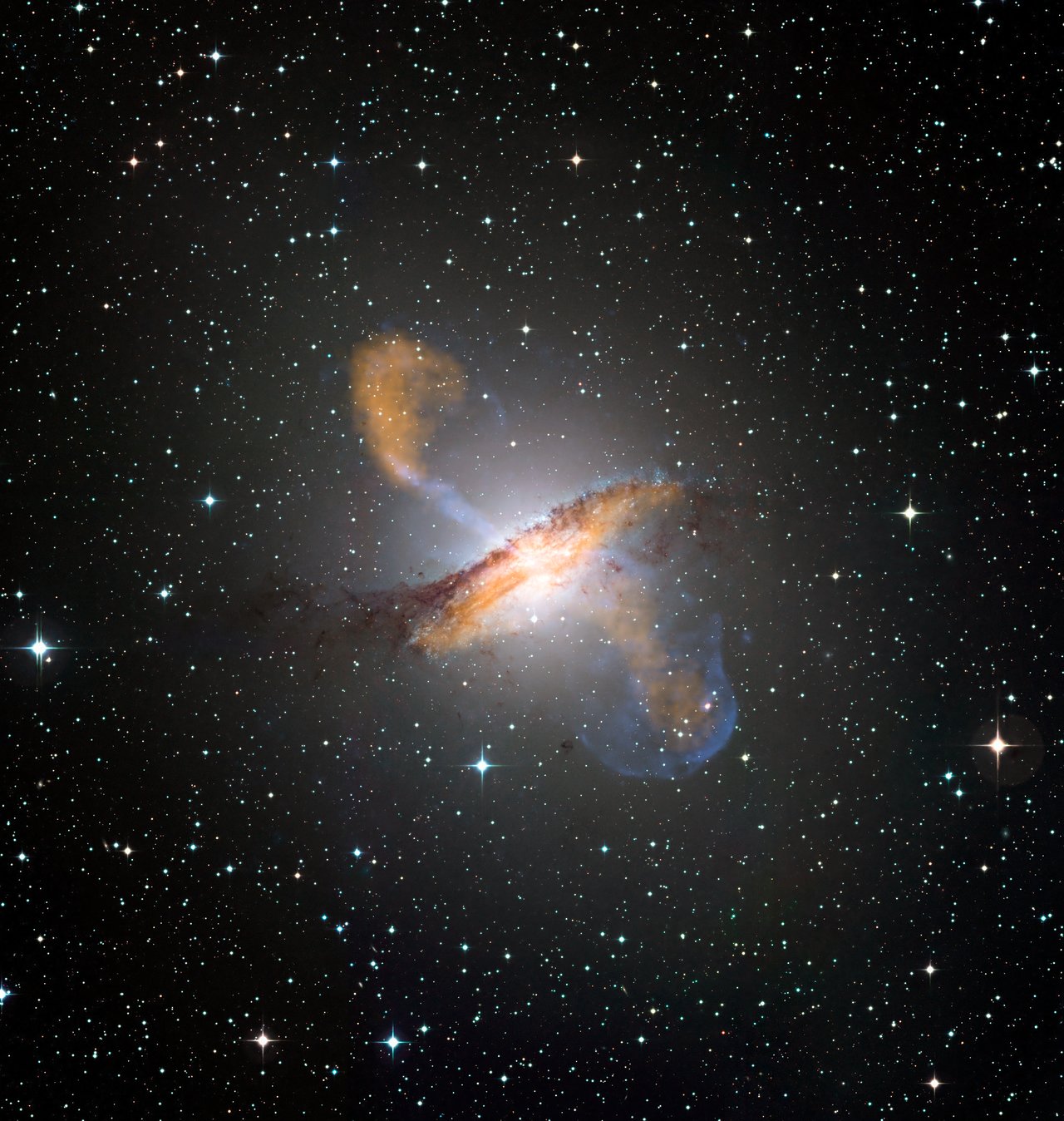 The lead author of our Science paper — Oliver Müller from the University of Basel — has previously studied the Cen A system and found that the dwarf satellites are aligned along a plane. However, this specific planar geometry of Cen A occurs about 20% of the time in cosmological simulations (one out of five), so it didn’t seem too odd at first glance. But the picture changed drastically when we looked at the motions of the satellite galaxies.

Q: What did you find?

A: It turns out that the velocities of the satellite galaxies aren’t random, as we expected from cosmological simulations. After subtracting the so-called “recession velocity” due to the expansion of the Universe, the satellite galaxies to the south of Cen A are moving away from us, while the ones to the north of Cen A are approaching us. This is consistent with coherent rotation within the plane, similar to how the satellite dwarfs are moving around the Milky Way and the Andromeda Galaxy. When we consider both the distribution and the motions of the satellite dwarfs, a configuration like Cen A becomes extremely rare in cosmological simulations: it has a probability of only 0.1%. In other words, we didn’t actually pick up a “weird” system out of thousands of “normal” ones — this can’t just be a coincidence. Instead, it seems likely that Cen A, Andromeda, and the Milky Way are normal galaxies after all, and that satellite planes are the rule rather than the exception. Perhaps there are many more planes of satellite galaxies out there just waiting to be discovered.

Dwarf galaxies are arranged on a disc-shaped plane around the galaxy Centaurus A. Using the Doppler effect (a shift in spectral lines), their direction of motion and speed can be calculated.
Credit: University of Basel/Oliver Müller

Q: What are the major implications of this discovery?

A: Essentially, our observations challenge the simulations. Planes of satellite dwarfs have been observed in all three major galaxies in the nearby Universe: the Milky Way, the Andromeda Galaxy, and now Cen A. This pattern is telling us something: since state-of-the-art cosmological simulations can’t explain how these planar structures are formed, perhaps we should start looking at alternatives.

For example, there is an old idea from the Swiss astrophysicist Fritz Zwicky: dwarf galaxies may form during the encounter of two large galaxies, out of small debris that is ejected by tidal forces during the interaction. This idea was proposed again by the British astrophysicist Donald Lynden-Bell in the 1970s; he was one of the first to note the planar distribution of dwarf galaxies around the Milky Way and to point out that galaxy encounters may naturally explain such geometries and coherent motions. Dwarf galaxies formed in this way, however, should be free of dark matter, so people lost interest in such an idea as the predominant dark matter paradigm took over. Our results indicate that such “old” ideas deserve a closer look.

Here we see the result of the merger between two spiral galaxies, forming a central elliptical-like object called NGC 7252 with two large tidal tails. Tidal dwarf galaxies are currently forming within these tails. The optical image is overlaid with the gas distribution (blue) and ultraviolet emission (violet), probing the recent formation of new stars and highlighting the location of tidal dwarfs.
Credit: Lelli et al. 2015, A&A

Q: Did you face any challenges in your research?

A: The observational aspect of this work was relatively easy because we used existing data. The velocities of the dwarf satellites were measured before by other authors using various facilities and techniques. We “only” had to collect and analyse them. The challenging part was to compare reality with simulations, taking into account possible observational biases and uncertainties. In particular, we considered two large public simulations. One — called Millennium II — uses only dark matter particles and neglects the possible effect of “baryonic processes”, like the formation of stars, supernova explosions, and so on. The other — called Illustris — tries to model these complex baryonic processes to form actual galaxies inside dark matter halos. However, both simulations give essentially the same result as far as the distribution and kinematics of dwarf satellites are concerned.

Q: What do you personally find most exciting about this research topic?

Q: So what’s your next step?

A: Next, we will measure distances and velocities of more candidate dwarf galaxies around Cen A. This will improve our statistics and allow for a more accurate comparison with cosmological simulations. We will also look for similar planar structures around other large galaxies in the Universe.

Federico Lelli is an ESO Fellow in Germany. He grew up in a small Italian town called Castelferretti and studied at the University of Bologna. He obtained his PhD from the University of Groningen in the Netherlands, where his thesis on starburst dwarf galaxies was considered among the top 5% theses from the university in 2013. After a postdoc position at Case Western Reserve University in Cleveland, Ohio, he moved to Garching to join ESO as a Fellow in January 2017.