Behind the scenes at ESO: Showing you the road to the stars
What you’ll discover in this blog post:
A team of astronomers led by Keiichi Ohnaka in Chile have looked deep into the core of the Toby Jug Nebula to gather clues on how dying stars change into complex nebulae. The team’s spectacular new images, obtained using ESO’s Very Large Telescope Interferometer (VLTI), revealed the inner rim of a very compact disc around the red giant star at the heart of the nebula. The team suggest a former companion star might have been shredded into this rare disc in an event powerful enough to trigger the formation of this remarkable nebula. 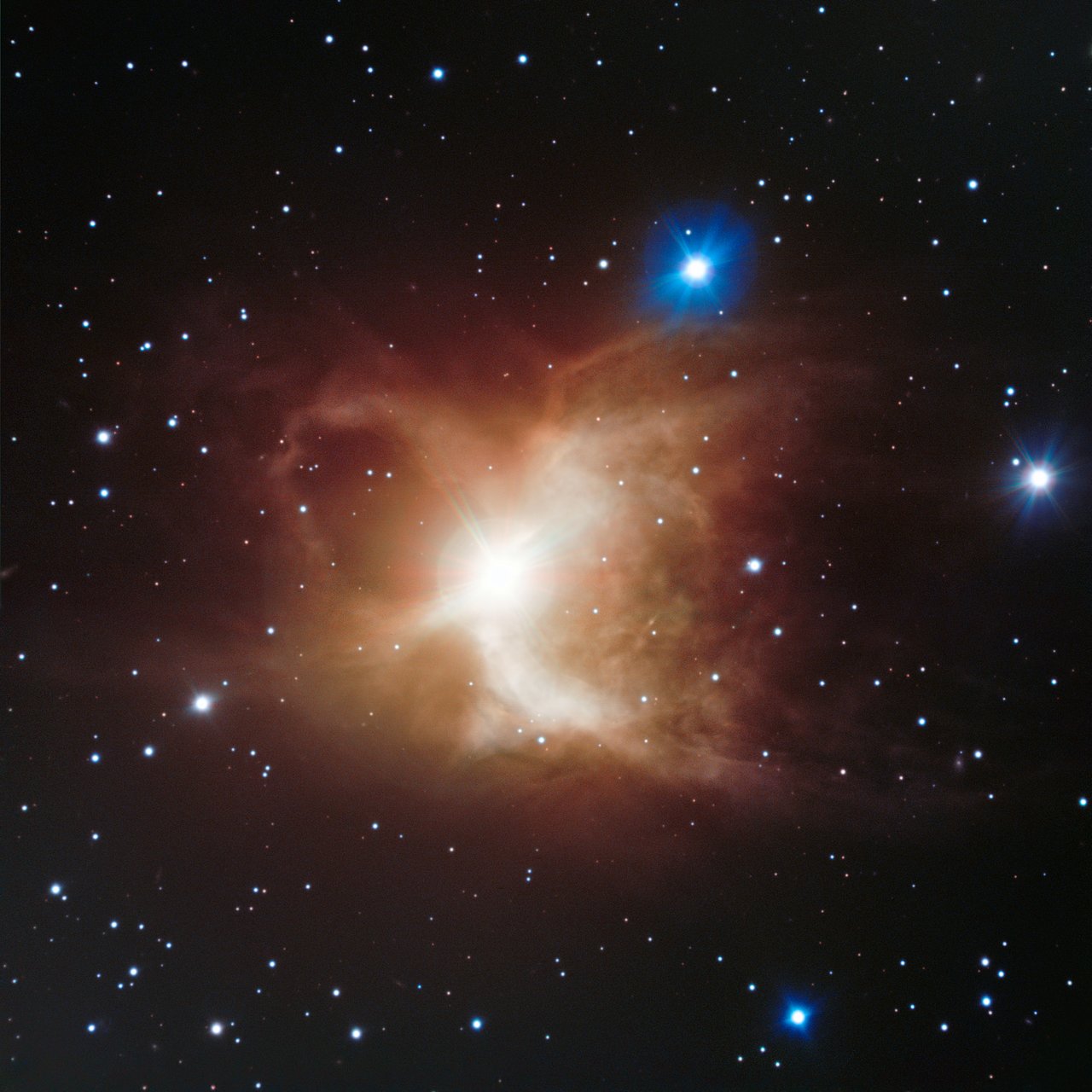 A few years ago, ESO published a stunning image of the Toby Jug Nebula, obtained with its Very Large Telescope (VLT) as part of ESO’s Cosmic Gems initiative. This programme makes use of “low-grade time” — when the sky conditions at the observatory aren’t perfect for scientific observations and the telescopes might otherwise be idle — to obtain images for educational and public outreach purposes. Featured objects in the programme, such as the Toby Jug Nebula, are selected primarily for their attractive or intriguing appearances.

However, the Toby Jug has proved to be worth far more than its good looks alone. Located some 1200 light-years from Earth in the southern constellation of Carina (The Ship’s Keel), it was formed by the red giant star at its centre, named HR3126, which has shedded huge quantities of material from its outer layers. Its striking portrait, complex bipolar shape, and the fact that its red giant is still transitioning into the nebula, motivated a team of astronomers to take a closer look at the heart of this vast object.

Ohnaka, based at the Universidad Católica del Norte in Antofagasta, and his colleagues were keen to investigate the transformation from giant, round stars to beautiful planetary nebulae to understand how the latter develop their often complex shapes. The transition from a dying red giant star to the vibrant nebula it forms around itself is brief, making it difficult to find red giants that are either undergoing or have very recently undergone this transformation. Red giants developing nebulae as large as the Toby Jug nebula are especially rare, making this object an ideal case study. 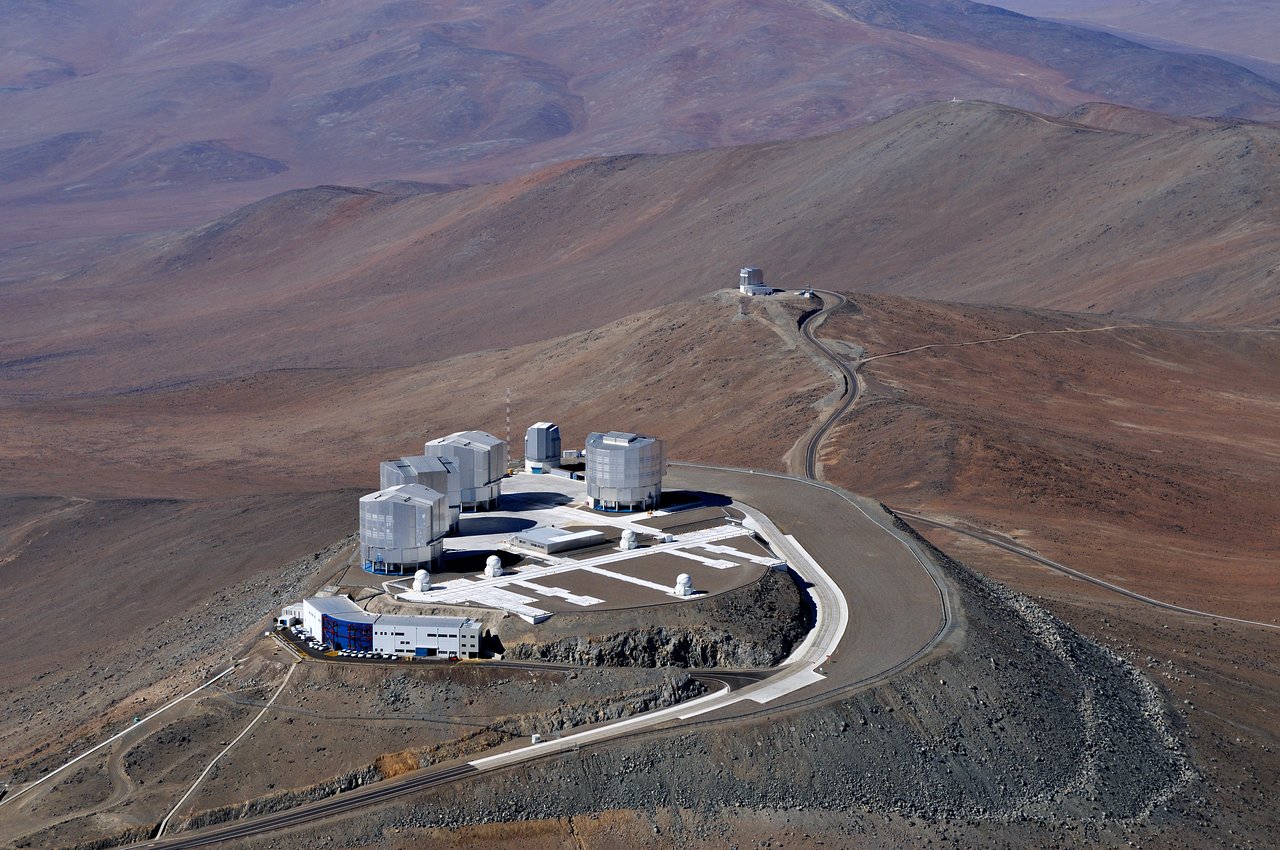 The team conducted new observations of the Toby Jug nebula using the AMBER and GRAVITY instruments on ESO’s VLTI, which combines light from the telescopes that make up ESO’s VLT, situated on the 2600-metre-high Cerro Paranal in Chile. The VLT consists of four individual unit telescopes with main mirrors 8.2-metres in diameter, and four movable 1.8-metre diameter auxiliary telescopes. For this research, the team used the auxiliary telescopes simultaneously, acting as the equivalent of a single telescope up to 130m in diameter. This allowed the astronomers to zoom in to the heart of the nebula to see details some 21 000 times finer than what was possible in the original VLT Cosmic Gems image. 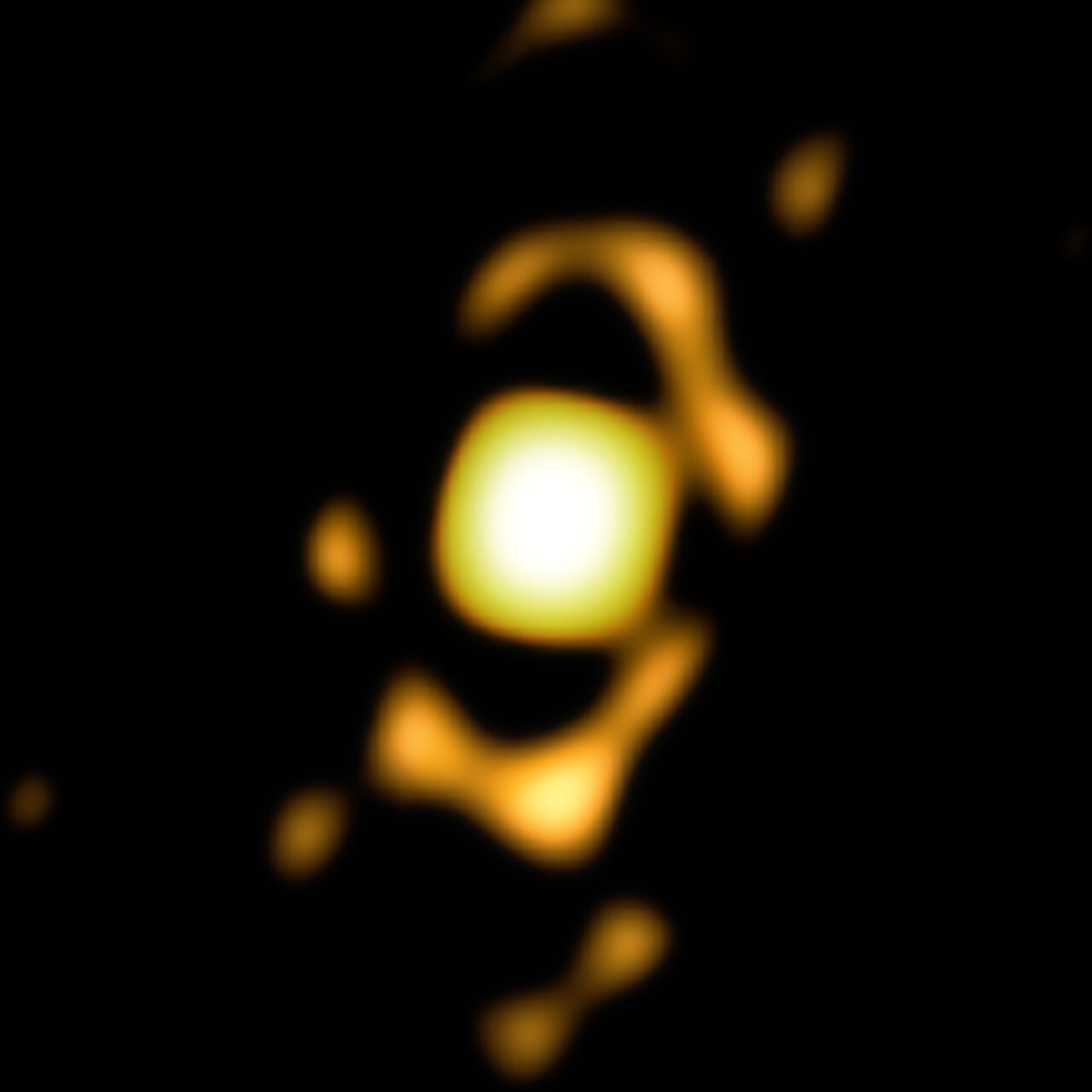 This new image from the VLTI is 21 000 times more zoomed in than the original image of the Toby Jug nebula
Credit: ESO/Ohnaka et al.

The researchers, who have published their new study in Astronomy & Astrophysics this week, expected to find a binary companion to HR3126 at the heart of the nebula. While the physical process behind the transformation from red giant to planetary nebula is not yet fully understood, astronomers believe that the interaction between the central red giant and a binary companion star is likely to play a key role in forming bipolar nebulae. Ohnaka’s team were therefore somewhat surprised when no companion star was detected alongside the red giant at the Toby Jug’s centre.

What they discovered instead was the inner rim of an extremely compact disc around HR3126, more than 20 000 times smaller than the surrounding nebula. The inner rim is visible on the new VLTI image, rather than the whole disc, because it is heated by the central star and appears much brighter.

Although the presence of a companion star is not completely excluded, this finding indicates that there might be a violent explanation for the lack of a second star. Such a star might have been shredded into the disc surrounding HR3126 in an event powerful enough to trigger the formation of the surrounding nebula. However, the researchers stress that more observations would be needed to confirm this scenario.

Despite the need for further work to confirm the possible fate of HR3126’s companion star, the incredible detail in this new imaging provides precious clues that could be essential for improving astronomers’ understanding of how dying stars develop such nebulae.

The Toby Jug is just one of the many breath-taking nebulae that can be viewed in the ESO image archive. With their bold colours and vast, unique shapes, it is hardly a surprise that astronomers are drawn to these fascinating objects. The archive is also home to hundreds of other fantastic cosmic images from within our galaxy and beyond.

Our Cosmic Gems page is also worth a visit — whether it’s to see some more great pictures from our telescopes or, if you are an astronomer, perhaps even to help you find your next research target!

Anna Purdue is a science journalism intern at ESO. Prior to this she has completed a BSc in Physics with Astrophysics from Northumbria University (UK) and an MSc in Science Communication from the University of Edinburgh.