A high-level Microsoft delegation, including the President of Microsoft, Brad Smith, visited ESO’s Paranal Observatory on Friday 24 May. The visit was hosted by a number of ESO staff, including the ESO Representative in Chile, Claudio Melo, and the Director of La Silla Paranal Observatory, Andreas Kaufer. The visit was an ideal opportunity for Microsoft and ESO to explore the possibility of cooperation in research and innovation, in particular to address the challenges facing ground-based astronomy in the area of giant telescopes such as the upcoming Extremely Large Telescope (ELT).

“Back in 2018, the Director of La Silla Paranal Observatory saw an interesting presentation by the General Manager of Microsoft Chile, Sergio Rademacher, presenting developments in areas like artificial intelligence and deep learning, etc.”, explained Claudio Melo. “At ESO, we had already started to discuss how to jointly operate the VLT and the ELT using the latest technological advances, so the idea of a collaboration between Microsoft and ESO came about quite naturally.”

Last March, the President of Microsoft Latin America, Cesar Cernuda, visited Paranal and signed a Memorandum of Understanding between Microsoft and ESO. Prior to any future collaboration, Microsoft and ESO are aiming to test some new concepts at the Very Large Telescope in order to evaluate how new machine learning methods will improve the efficiency of telescope operations.

“It is rewarding that ESO observatories are seen as an exciting testbed for further research into technologies such as those being developed by Microsoft, which have such a profound impact on modern society”, elaborated Andreas Kaufer.

"Artificial Intelligence generates great opportunities for science, impacting positively on research and on the generation of knowledge through technology”, commented Sergio Rademacher. “In Microsoft, we promote projects around the world that aim to democratise technology in scientific areas.”

This visit to Paranal was also the occasion for Microsoft to film a new chapter of the Today in Technology series, in which Brad Smith and Carol Ann Browne, Director of Executive Communication at Microsoft, explored the history of ESO’s innovative construction of ground-based observatories like Paranal in Chile’s Atacama Desert, and the vital role played by international collaboration in developing new technologies. 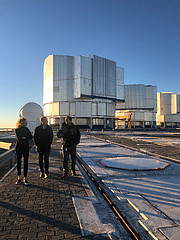