Icy penitents by moonlight on Chajnantor 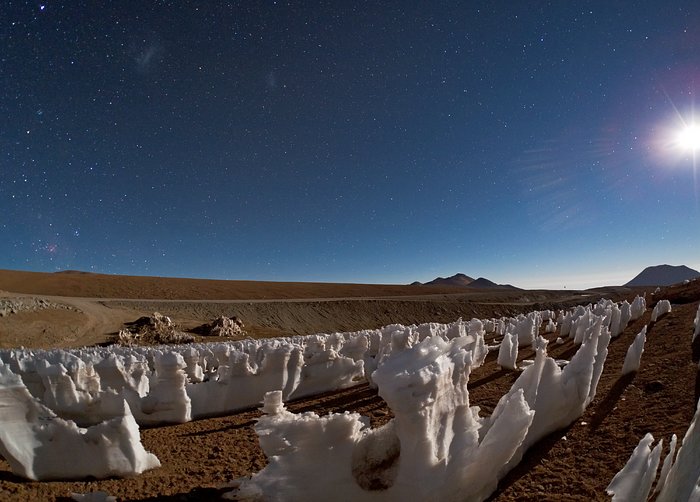 Babak Tafreshi, one of the ESO Photo Ambassadors, has captured a curious phenomenon on the Chajnantor plateau, the site of the Atacama Large Millimeter/submillimeter array (ALMA).

These bizarre ice and snow formations are known as penitentes (Spanish for “penitents”). They are illuminated by the light of the Moon, which is visible on the right on the photograph. On the left, higher in the sky, the Large and Small Magellanic Clouds can be faintly seen, while the reddish glow of the Carina Nebula appears close to the horizon on the far left.

The penitentes are natural marvels found in high-altitude regions, such as here in the Chilean Andes, typically more than about 4000 metres above sea level. They are thin spikes and blades of hardened snow or ice, which often form in clusters, with their blades pointing towards the Sun. They attain heights ranging from a few centimetres, resembling low grass, up to five metres, giving an impression of an ice forest in the middle of the desert.

The precise details of the mechanism that forms the penitentes are still not completely understood. For many years, people of the Andes believed the penitentes to be the result of strong winds prevalent in the Andes mountains. However, the strong winds have only a limited role in shaping these icy pinnacles. Nowadays, it is believed that they are the product of a combination of physical phenomena.

The process begins with sunlight shining on the surface of the snow. Due to the very dry conditions in these desert regions, the ice sublimes rather than melts — it goes from solid to gas without melting and passing through a liquid water phase. Surface depressions in the snow trap reflected light, leading to more sublimation and deeper troughs. Within these troughs, increased temperature and humidity means that melting can occur. This positive feedback accelerates the growth of the characteristic structure of the penitentes.

These icy statues are named after the spiked hats of the nazarenos, members of a brotherhood that participates in Easter processions around the world. It is not hard to picture them as an assembly of icy monks, congregating in the moonlight.

The image was taken by the side of the road that leads to ALMA. The observatory, which started Early Science operations on 30 September 2011, will eventually consist of 66 high-precision antennas operating together as a single giant telescope.