Yepun’s laser and the Magellanic Clouds 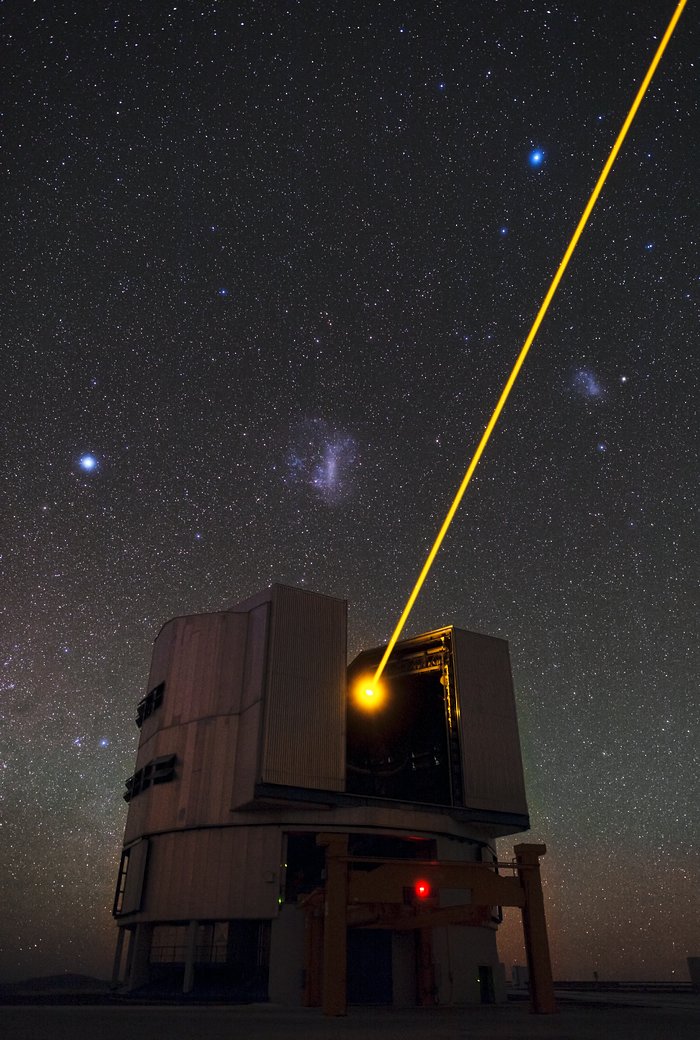 One of the major enemies of astronomers is the Earth’s atmosphere, which makes celestial objects appear blurry when observed by ground-based telescopes. To counteract this, astronomers use a technique called adaptive optics, in which computer-controlled deformable mirrors are adjusted hundreds of times per second to correct for the distortion of the atmosphere.

This spectacular image shows Yepun [1], the fourth 8.2-metre Unit Telescope of ESO’s Very Large Telescope (VLT) facility, launching a powerful yellow laser beam into the sky. The beam creates a glowing spot — an artificial star — in the Earth’s atmosphere by exciting a layer of sodium atoms at an altitude of 90 km. This Laser Guide Star (LGS) is part of the VLT’s adaptive optics system. The light coming back from the artificial star is used as a reference to control the deformable mirrors and remove the effects of atmospheric distortions, producing astronomical images almost as sharp as if the telescope were in space.

Yepun’s laser is not the only thing glowing brightly in the sky. The Large and Small Magellanic Clouds can be seen, to the left and to the right of the laser beam, respectively. These nearby irregular dwarf galaxies are conspicuous objects in the southern hemisphere, and can be easily observed with the unaided eye. The prominent bright star to the left of the Large Magellanic Cloud is Canopus, the brightest star in the constellation Carina (The Keel), while the one towards the top-right of the image is Achernar, the brightest in the constellation Eridanus (The River).

This image was taken by Babak Tafreshi, an ESO Photo Ambassador.