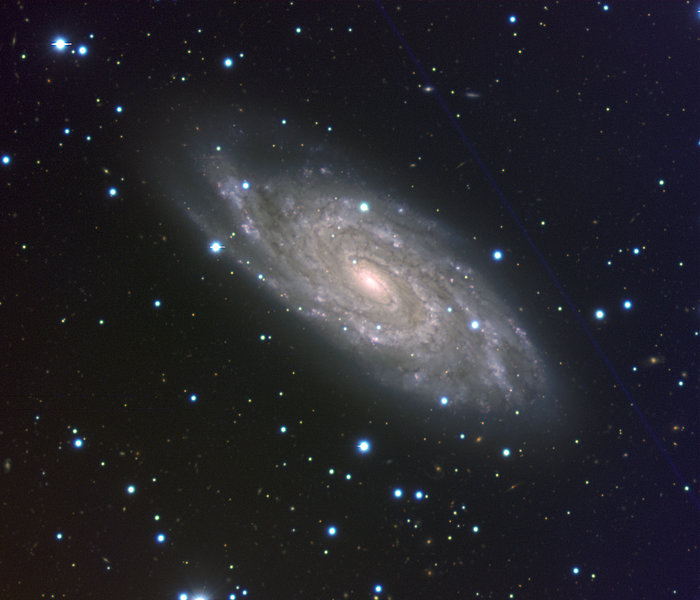 These are almost-true colour composites based on images made with the multi-mode VIMOS instrument on the 8.2-m Melipal (Unit Telescope 3) of ESO's Very Large Telescope. In each case, exposures were taken in three different wavebands which were associated to a given colour: R-band (centred around 652 nm; red), V (540 nm; green) and B (456 nm; blue). The images of NGC 6118 were taken on several nights around August 21, 2004 when the observing conditions were somewhat unstable (seeing around 2 arcsec). The total exposure was 12.5 min in R, 25 min in V and 7 min in B. The images of NGC 7424 were obtained on the night of October 9, 2004, (around 4:00 am CET) when the conditions were good (seeing: 1 arcsec). The total exposure time was 7 min in R, 25 min in V and 10 min in B. The pixel scale is 0.205 arcsec/pix. All exposures were taken and pre-processed by ESO Paranal Science Operation Astronomers. Further image processing was made by Hännes Heyer (ESO) for NGC 6118 and by Henri Boffin (ESO) for NGC 7424. The classification of Supernova 2004dk was made by Ferdinando Patat and Giuliano Pignata (ESO) and S. Benetti (INAF, Italy) using data from the Calar Alto Observatory (Spain).

Composite colour-coded image of the "grand design" spiral galaxy NGC 6118, at a distance of 80 million light-years. It is based on images obtained with the multi-mode VIMOS instrument on the ESO Very Large Telescope (VLT) in three different wavebands. The image covers 6.7 x 5.8 square arcminutes on the sky. North is up and East is to the left.