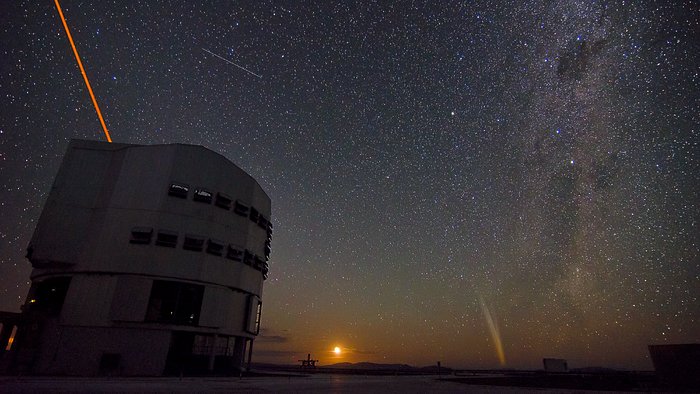 ESO’s Paranal Observatory in Chile’s Atacama Desert, by night. Paranal is the home of the ESO Very Large Telescope (VLT), the world's most advanced visible-light astronomical observatory. In this photograph, taken on 22 December 2011, Comet Lovejoy can be seen on the horizon, to the right of the Moon. A reddish laser beam shoots from one of the VLT’s giant Unit Telescopes, creating an artificial star to allow astronomers to make sharper observations. Above the telescope, the streak of a satellite trail can be seen in the sky.

Cerro Paranal is a 2600-metre-high mountain, situated about 130 km south of Antofagasta in Chile, 12 km inland from the Pacific coast in one of the driest areas in the world. The site provides excellent conditions for astronomical observations, as can be seen from the clear view of the stars of the Milky Way in this photograph.