The Flame Nebula region as seen with APEX and VISTA 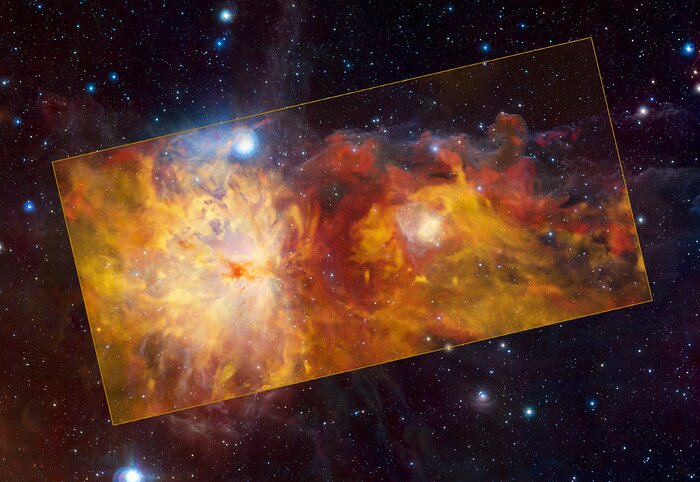 Do not let the image and the name of the depicted cosmic object fool you! What you see in this picture is not a wildfire, but the Flame Nebula and its surroundings captured in radio waves.

The Flame Nebula is the large feature on the left half of the central, yellow rectangle. The smaller feature on the right is the reflection nebula NGC 2023. To the top right of NGC 2023, the iconic Horsehead Nebula seems to emerge heroically from the “flames”. The three objects are part of the Orion cloud, a giant gas structure located between 1300 and 1600 light-years away.

The different colours indicate the velocity of the gas. The Flame Nebula and its surroundings are moving away from us, with the red clouds in the background receding faster than the yellow ones in the foreground.

The image in the rectangle is based on observations conducted with the SuperCam instrument on the ESO-operated Atacama Pathfinder Experiment (APEX) on Chile’s Chajnantor Plateau. The background image was taken in infrared light with ESO’s Visible and Infrared Survey Telescope for Astronomy (VISTA) at the Paranal Observatory in Chile.