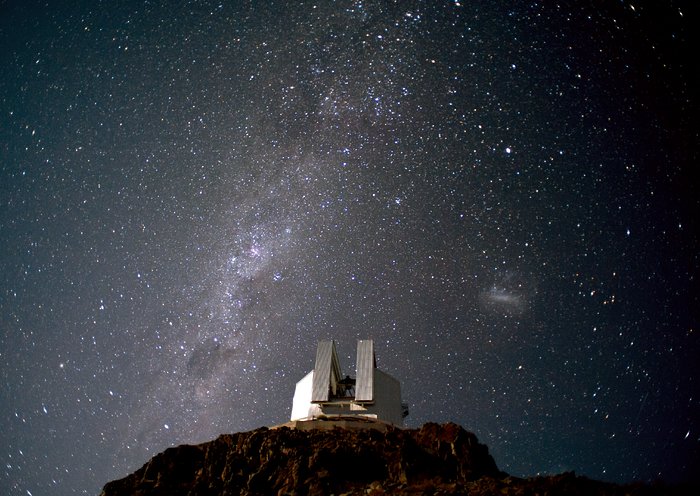 Research telescopes sport state-of-the-art cameras which, together with the big mirrors needed for a large collecting area, allow astronomers to catch the faint light of deep sky objects. But you can also produce beautiful images without big telescopes and using more modest cameras.

Astrophotographers use more conventional cameras to capture images of astronomical objects, often on a larger scale than the observations made with big telescopes. Sometimes, they include the landscape in their composition, producing beautiful postcards of the Universe as seen from Earth.

For example, this Picture of the Week shows the 3.58-metre New Technology Telescope (NTT), located at ESO’s La Silla Observatory, and set against the starry background of the southern sky. Standing out in the image, the Milky Way — our home galaxy — can be seen as a hazy stripe across the sky. Dark regions within the Milky Way are areas where the light from background stars is blocked by interstellar dust. In addition, the Large Magellanic Cloud appears to the right of the telescope as a foggy blob in the sky. This nearby irregular galaxy is a conspicuous object in the southern sky. It orbits the Milky Way and there is evidence to suggest that it has been greatly distorted by its interaction with our own galaxy.

This image was taken by Håkon Dahle, who is also an accomplished professional astronomer. He submitted the photograph to the Your ESO Pictures Flickr group. The Flickr group is regularly reviewed and the best photos are selected to be featured in our popular Picture of the Week series, or in our gallery.