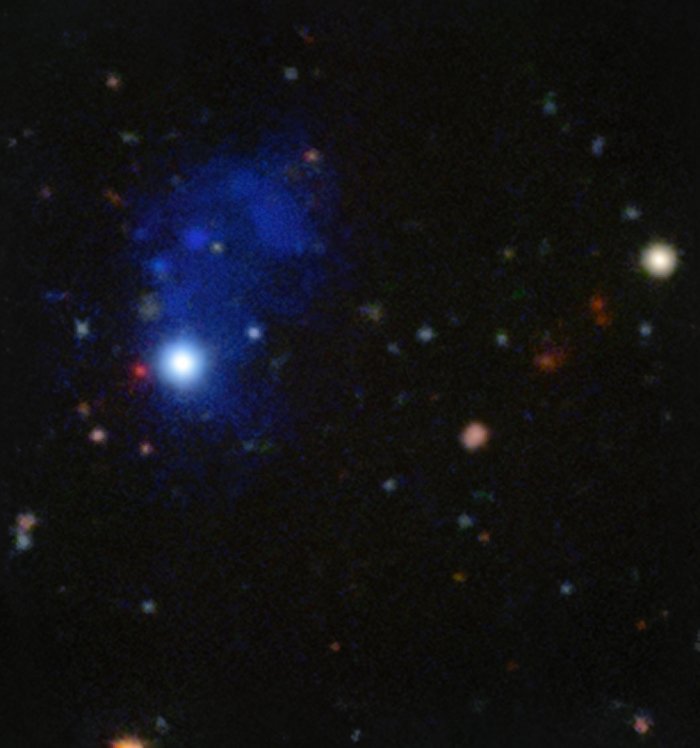 This Picture of the Week shows a huge cloud of gas around the distant quasar SDSS J102009.99+104002.7, taken by the Multi Unit Spectroscopic Explorer (MUSE) instrument on ESO’s Very Large Telescope (VLT) at the Paranal Observatory. Quasars are the luminous centres of active galaxies, which are kept active by material falling onto the central supermassive black hole. This quasar and its surrounding cloud are at a redshift larger than 3, meaning that they are seen as they were only about 2 billion years after the Big Bang.

The cloud of gas (or nebula) surrounding the quasar is known to astronomers as an Enormous Lyman-Alpha Nebula (ELAN). These types of nebula are massive structures of gas which formed in the early Universe, and they can help astronomers to learn how angular momentum — which explains the observed rotation of more recent galaxies — was created in the Universe. Thanks to the revolutionary MUSE instrument, it is now possible to observe these rare giant nebulae in greater detail than ever before.

This particular ELAN has a diameter of about a million light-years, and MUSE’s spectral imaging capabilities have allowed astronomers to measure the signature of inspiraling motions within the nebula — for the first time ever.