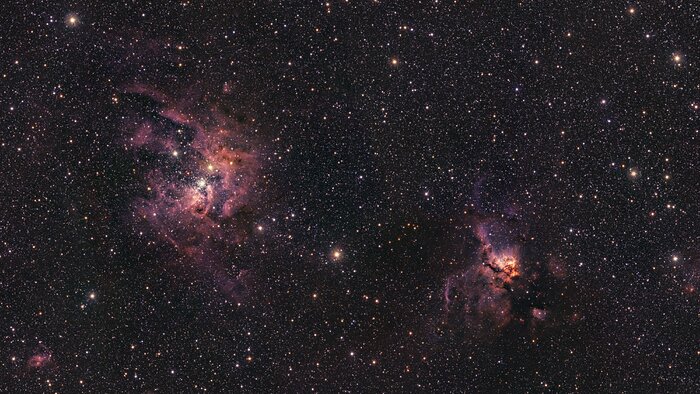 This Picture of the Week shows a new view of NGC 3603 (left) and NGC 3576 (right), two stunning nebulas imaged with ESO’s Visible and Infrared Survey Telescope for Astronomy (VISTA). This infrared image peers through the dust in these nebulas, revealing details hidden in optical images.

NGC 3603 and NGC 3576 are 22,000 and 9,000 lightyears away from us, respectively. Inside these extended clouds of dust and gas, new stars are born, gradually changing the shapes of the nebulas via intense radiation and powerful winds of charged particles. Given their proximity, astronomers have the opportunity to study the intense star formation process that is as common in other galaxies but harder to observe due to the vast distances.

The two nebulas were catalogued by John Frederick William Herschel in 1834 during a trip to South Africa, where he wanted to compile stars, nebulas and other objects in the sky of the southern hemisphere. This catalogue was then expanded by John Louis Emil Dreyer in 1888 into the New General Catalogue, hence the NGC identifier in these and other astronomical objects.