A window to the galaxy 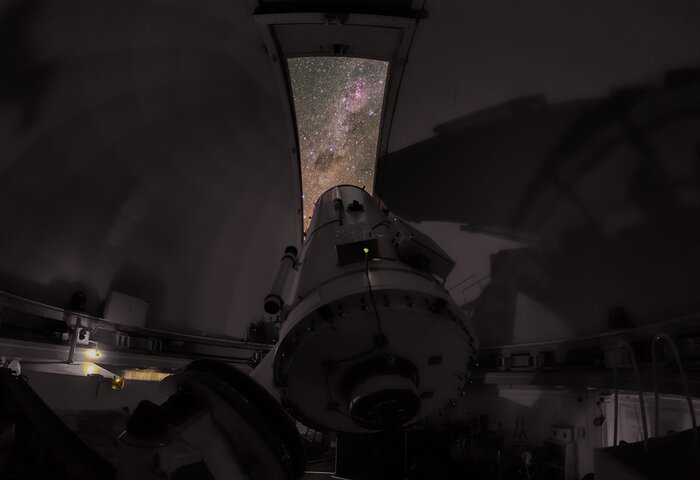 The ESO 1.52-metre telescope gazes at the Milky Way from its home at La Silla Observatory in this Picture of the Week. The now retired telescope has uncovered many of the Universe's secrets. Its most popular instrument was the B&C spectrograph, used for almost 30 years to study stars, galaxies and comets. Another instrument, ECHELEC, helped astronomers understand the intense winds of Wolf-Rayet stars, and FEROS discovered exciting exoplanets. When the telescope was decommissioned in 2002, FEROS was moved to the MPG/ESO 2.2-metre telescope, also in La Silla, where it still searches for distant new worlds.

Through the dome’s opening we can see the pink-shaded Carina Nebula, home to some of the most massive and luminous stars in our galaxy. Further down, to the centre-left of the slit, there’s the Coalsack Nebula, a dark cloud of dust. Let’s finish with a quiz: the four stars of the Southern Cross, which appear in the ESO logo, can also be seen here. Can you spot them? Here’s a clue.