ESO Astronomer awarded the Sparlamento Prize in Research and Development 2019

ESO astronomer Paolo Padovani has been awarded the “Sparlamento Prize in Research and Development 2019” for his contribution to enhancing Italian excellence in astronomy. The ceremony took place on 5 July 2019, at the Italian House of Parliament in Rome — the first time ever an astronomical ceremony was held in the building.

Paolo Padovani is studying Active Galactic Nuclei (AGN) using data covering the entire electromagnetic spectrum and works on very deep radio surveys and neutrino astronomy. During his first years at ESO, he led the organisation’s participation in the Virtual Observatory and since 2011 he has been working in the ELT Science Office under the Directorate of Science.

The prize ceremony for this new award organised by Sparlamento included a presentation from Padovani about ESO and the Extremely Large Telescope (ELT), in which he highlighted the influence of Italy, and a lectio magistralis about "Neutrinos from supermassive black holes: a new window on the Universe”, related to the discovery of a distant source of high-energy neutrinos.

Once completed, the ELT will be “the world’s biggest eye on the sky”, tackling the biggest astronomical challenges of our time. Both Italian industry and astronomers are contributing to the development of the ELT. For example, the largest ever ground-based astronomy contract set out to construct the ELT Dome and Telescope Structure was awarded to an Italian company (eso1617), while the Istituto Nazionale di Astrofisica (INAF), in conjunction with France and ESO, is leading the MAORY project — MAORY is the Multi-conjugate Adaptive Optics RelaY, a new adaptive optics module for the ELT (ann15093). Furthermore, the contract for the adaptive fourth mirror (M4) of the ELT has been awarded to the AdOptica consortium made up of two Italian firms, ADS International and Microgate (ann15045).

During the award ceremony, there was also a round table discussion about "The future of Italian Astronomy in the international landscape: the role of the government in support of the Italian astronomical research”. A number of guests participated, including Nichi D’Amico, President of the National Institute for Astrophysics (INAF), Ginevra Trinchieri, President of the Italian Astronomical Society, Gianpietro Marchiori, CEO of the European Industrial Engineering Group, Cristina DelTutto, Director of Sparlamento, and Marco Bella, Member of the Italian Parliament.

This award is not only a well-deserved recognition of Paolo Padovani’s contribution but also highlights a long and successful history of groundbreaking work by Italian astronomers and engineers at ESO. Italy joined ESO in 1982. Scientific discoveries led by Italian astronomers include the first detection of lithium from an exploding star (eso1531) and the discovery of a rare fossil relic of the early Milky Way (eso1630). On the technological development front, the VLT Survey Telescope (VST) was designed by the Astronomical Observatory of INAF at Capodimonte, Naples (eso1119).

The complete set of pictures and videos (in Italian) of the ceremony is available on the Sparlamento website. 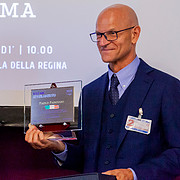 PR Image ann19038a
ESO astronomer Paolo Padovani receives the the “Sparlamento Prize in Research and Development 2019”
Send us your comments!
Subscribe to receive news from ESO in your language
Accelerated by CDN77
Terms & Conditions