Portugal to Accede to ESO

The Republic of Portugal will become the ninth member state of the European Southern Observatory (ESO) [1]. Today, during a ceremony at the ESO Headquarters in Garching (Germany), a corresponding Agreement was signed by the Portuguese Minister of Science and Technology, José Mariano Gago and the ESO Director General, Catherine Cesarsky, in the presence of other high officials from Portugal and the ESO member states (see the video eso0022a in this release). Following subsequent ratification by the Portuguese Parliament of the ESO Convention and the associated protocols [2], it is foreseen that Portugal will formally join this organisation on January 1, 2001.

In his speech, the Portuguese Minister of Science and Technology, José Mariano Gago stated that "the accession of Portugal to ESO is the result of a joint effort by ESO and Portugal during the last ten years. It was made possible by the rapid Portuguese scientific development and by the growth and internationalisation of its scientific community".

He continued: "Portugal is fully committed to European scientific and technological development. We will devote our best efforts to the success of ESO".

Catherine Cesarsky, ESO Director General since 1999, warmly welcomed the Portuguese intention to join ESO. "With the accession of their country to ESO, Portuguese astronomers will have great opportunities for working on research programmes at the frontiers of modern astrophysics".

"This is indeed a good time to join ESO", she added. "The four 8.2-metre VLT Unit Telescopes with their many first-class instruments are nearly ready, and the VLT Interferometer will soon follow. With a decision about the intercontinental millimetre-band ALMA project expected next year and the first concept studies for gigantic optical/infrared telescopes like OWL now well under way at ESO, there is certainly no lack of perspectives, also for coming generations of European astronomers!"

Portuguese astronomy: a decade of progress

The beginnings of the collaboration between Portugal and ESO, now culminating in the imminent accession of that country to the European research organisation, were almost exactly ten years ago.

On July 10, 1990, the Republic of Portugal and ESO signed a Co-operation Agreement, aimed at full Portuguese membership of the ESO organisation within the next decade. During the interim period, Portuguese astronomers were granted access to ESO facilities while the Portuguese government would provide support towards the development of astronomy and the associated infrastructure in this country.

A joint Portuguese/ESO Advisory Body was set up to monitor the development of Portuguese astronomy and its interaction with ESO. Over the years, an increasing number of measures to strengthen the Portuguese research infrastructure within astrophysics and related fields were proposed and funded. More and more, mostly young Portuguese astronomers began to make use of ESO's facilities at the La Silla observatory and recently, of the Very Large Telescope (VLT) at Paranal.

Now, ten years later, the Portuguese astronomical community is the youngest in Europe with more than 90% of its PhD's awarded during the last eight years. As expected, the provisional access to ESO telescopes - especially the VLT with its suite of state-of-the-art instruments for observations at wavelengths ranging from the UV to the mid-infrared - has proven to be a great incentive to the Portuguese scientists.

As a clear demonstration of these positive developments, a very successful Workshop entitled "Portugal - ESO - VLT" was held in Lisbon on April 17-18, 2000. It was primarily directed towards young Portuguese scientists and served to inform them about the ESO VLT and the steadily evolving, exciting research possibilities with this world-class facility.

[2]: The ESO Convention was established in 1962 and specifies the goals of ESO and the means to achieve these, e.g., "The Governments of the States parties to this convention... desirous of jointly creating an observatory equipped with powerful instruments in the Southern hemisphere and accordingly promoting and organizing co-operation in astronomical research..." (from the Preamble to the ESO Convention). 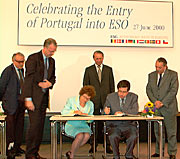 PR Video eso0022a
Portugal to accede to ESO
Send us your comments!
Subscribe to receive news from ESO in your language
Accelerated by CDN77
Terms & Conditions