The VLT Observes Most Remote Novae Ever Seen

About 70 million years ago, when dinosaurs were still walking on the Earth, a series of violent thermo-nuclear explosions took place in a distant galaxy. After a very long travel across vast reaches of virtually empty space (70 million light-years, or ~ 7 x 10 20 km), dim light carrying the message about these events has finally reached us. It was recorded by the ESO Very Large Telescope (VLT) at the Paranal Observatory (Chile) during an observing programme by a group of Italian astronomers [1]. The subsequent analysis has shown that the observers witnessed the most distant nova outbursts ever seen. They were caused by "stellar cannibalism" in binary systems in which one relatively cool star loses matter to its smaller and hotter companion. An instability results that leads to the ignition of a "hydrogen bomb" on the surface of the receiving star.

A stellar outburst of the type now observed with the VLT is referred to as a "Stella Nova" ("new star" in Latin), or just "Nova" . Novae caused by explosions in binary stars in our home galaxy, the Milky Way system, are relatively frequent and about every second or third year one of them is bright enough to be easily visible with the naked eye. For our ancestors, who had no means to see the faint binary star before the explosion, it looked as if a new star had been born in the sky, hence the name.

The most common nova explosion occurs in a binary stellar system in which a white dwarf (a very dense and hot, compact star with a mass comparable to that of the Sun and a size like the Earth) accretes hydrogen from a cooler and larger red dwarf star [2].

As the hydrogen collects on the surface of the white dwarf star, it becomes progressively hotter until a thermonuclear explosion is ignited at the bottom of the collected gas. A huge amount of energy is released and causes a million-fold increase in the brightness of the binary system within a few hours. After reaching maximum light within some days or weeks, it begins to fade as the hydrogen supply is exhausted and blown into space. The processed material is ejected at high speeds, up to ~1000 km/sec, and may later be visible as an expanding shell of emitting gas.

Altogether, the tremendous flash of light involves the release of about 10 45 ergs in a few weeks, or about as much energy as our Sun produces in 10,000 years.

Supernovae explosions that completely destroy heavier stars at the end of their lives are even more powerful. However, in contrast to supernovae and despite the colossal energy production, the progenitor of a nova is not destroyed during the explosion. Some time after an outburst, transfer of hydrogen from the companion star begins anew, and the process repeats itself with explosions taking place about once every 100,000 years.

The nova star will finally die of "old age" when the cool companion has been completely cannibalized.

Due to their exceptional luminosity, novae can be used as powerful beacons that allow relative distances to different types of galaxies to be measured. The measurement is based on the assumption that novae of the same type are intrinsically equally bright, together with the physical law that states that an object's observed brightness decreases with the square of the distance to the observer.

Thus, if we observe that a nova in a certain galaxy is one million times fainter than a nearby one, we know that it must be one thousand times more distant. In addition, observations of novae in other galaxies shed light on the history of formation of their stars.

Despite their scientific importance, surveys of novae in distant, rich clusters of galaxies have not been very popular among astronomers. Major reasons are probably the inherent observational difficulties and the comparatively low rates of discovery. In the past, with 4-m class telescopes, tens of hours of monitoring of several galaxies have indeed been necessary to detect a few distant novae [3].

VLT observations of NGC 1316 in the Fornax Cluster

NGC 1316 is a giant "dusty" galaxy (ESO Press Photo eso0024), located in the Fornax cluster seen in the southern constellation of that name ("The Oven"). This galaxy is of special interest in connection with current attempts to establish an accurate distance scale in the Universe.

In 1980 and 1981, NGC 1316 was the host of two supernovae of type Ia, a class of object that is widely used as a "cosmological standard candle" to determine the distance to very distant galaxies, cf. ESO Press Release eso9861. A precise measurement of the distance to NGC 1316 may therefore provide an independent calibration of the intrinsic brightness of these supernovae.

The new observations were performed during 8 nights distributed over the period from January 9 to 19, 2000. They were made in service mode at the 8.2-metre VLT/ANTU telescope with the FORS-1 multi-mode instrument, using a 2k x 2k CCD camera with 0.2 arcsec pixels and a field of 6.8 x 6.8 arcmin 2. The exposures lasted 20 min and were carried out with three optical filters (B, V and I).

The most distant Novae observed so far

An analysis of the images that were obtained in blue light (B-filter) resulted in the detection of four novae. They were identified because of the typical change of brightness over the observation period, cf. eso0024b, eso0024c, as well as their measured colours.

Although the time-consuming reduction of the data and the subsequent astrophysical interpretation is still in progress, the astronomers are already now very satisfied with the outcome.

In particular, no less than four novae were detected in a single giant galaxy within only 11 days . This implies a rate of approximately 100 novae/year in NGC 1316, or about 3 times larger than the rate estimated for the Milky Way galaxy. This may (at least partly) be due to the fact that NGC 1316 is of a different type and contains more stars than our own galaxy.

The novae in NGC 1316 are quite faint, of about magnitude 24 and decreasing towards 25-26 during the period of observation. This corresponds to nearly 100 million times fainter than what can be seen with the naked eye. The corresponding distance to NGC 1316 is found to be about 70 million light-years .

Moreover, the discovery of four novae in one galaxy in the Fornax cluster was possible with only 3 hours of observing time per filter. This clearly shows that the new generation of 8-m class telescopes like the VLT, equipped with the new and large detectors, is able to greatly improve the efficiency of this type of astronomical investigations (by a factor of 10 or more), as compared to previous searches with 4-metre telescopes.

The road is now open for exhaustive searches for novae in remote galaxies, with all the resulting benefits, also for the accurate determination of the extragalactic distance scale.

[2] A graphical illustration of the nova phenomenon can be found at this website.

[3] For example, in 1987, Canadian astronomers Christopher Pritchet and Sidney van den Bergh , in an heroic tour de force with the 4-metre Canada-France-Hawaii telescope, found 9 novae after 56 hours of monitoring of 3 giant elliptical galaxies in the Virgo cluster of galaxies. 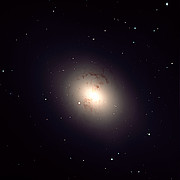 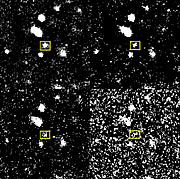 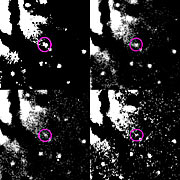 PR Image eso0024c
Brightness decline of Nova in NGC 1316
Send us your comments!
Subscribe to receive news from ESO in your language
Accelerated by CDN77
Terms & Conditions