Caught in the Cobweb

The Tarantula Nebula is one of the most impressive views in the Southern sky. Visible to the unaided eye in the Large Magellanic Cloud (LMC), a satellite galaxy of the Milky Way that is located in the direction of the southern constellation Doradus at a distance of about 170,000 light-years, this huge nebula is the prototype of what astronomers refer to as a "Giant HII region". In this complex of glowing gas and very hot and luminous stars, the gas is mainly composed of protons and electrons, which are kept apart by energetic photons emitted by the stars in this area.

The Tarantula Nebula (also designated 30 Doradus) owes its name to the arrangement of its brightest patches of nebulosity that somewhat resemble the legs of a spider. They extend from a central "body" where a cluster of hot stars (designated "R136") resides that illuminate the nebula. This name, of the biggest spiders on the Earth, is also very fitting in view of the gigantic proportions of the celestial nebula - it measures nearly 1,000 light years across!

While the central regions of 30 Doradus may be compared to a tarantula, the entangled filaments in the outskirts of this nebula could well be likened with its cobweb. They testify to an ongoing history of very vigorous activity and make this spectacular sky region a showcase of dramatic effects caused by the tremendous output of energy from the most massive stars known.

The marvellous richness of the filament colours is due to the varying conditions in the interstellar gas in this region. The red in these images is caused by emission of excited hydrogen atoms, the green shades correspond to emission from oxygen atoms from which two electrons ("doubly-ionized oxygen") have been "knocked off" by the energetic radiation of hot stars in the R136 cluster, that is located beyond the lower right corner of this photo. The intensity of this emission increases towards R136, explaining the yellowish colour near the edge of the photo.

A blue colour is contributed by singly-ionized atoms of oxygen. Other atoms like nitrogen and sulfur at different levels of ionization also add to the emission of the nebula at specific wavelengths. The observed colours thus probe the physical condition of the emitting gas and the temperature of the star(s) that excite(s) it. The intricate appearance of the filaments is mostly a consequence of turbulence in the interstellar gas, of the magnetic fields, and of the energy input by the massive stars in the neighbourhood.

The large ring-shaped nebula slightly to the lower-left (South-East) of the centre of the first image is known as DEM L 299 [1] Detailed investigations show that it represents an "interstellar bubble" which was "blown" by supernovae explosions, most probably happening millions of years ago, as massive stars near the centre of this structure ended their comparatively short lives in glorious flashes.

A closer inspection shows that another supernova exploded somewhat later near the rim, forming a bright and more compact nebula known as SNR 0543-689 (ESO Press Release eso0437). Other supernovae in this general field exploded even more recently, such as the one that created the remnant B0544-6910 (ESO Press Release eso0437) only a few tens of thousands of years ago, a blink of an eye by all astronomical standards.

Not all the nebulae seen in this region are caused by supernovae, however. The glow of N 164 [1], a bright, extended red-yellow nebula just below DEM L 299, is mostly due to its own "private" powerhouse, that consists of several massive stars deeply embedded in its interior.

The same holds for DEM L 297, the somewhat smaller and fainter nebula to the right of DEM L 299. It is divided into two half-circle formed segments by a dark lane of interstellar dust in front of it. Indeed, within the Tarantula complex many such dark and dusty clouds are seen in silhouette as they obscure bright nebulosity behind them.

The outskirts of the Tarantula Nebula are also rich in stellar clusters. One of them, NGC 2093 [1], has relatively few stars and is relatively young, just a few tens of millions of years. It appears that its stars have already excavated a sizeable cavity around them that is now relatively void of gas.

An older and much more compact cluster, NGC 2108, is seen near the bottom of the first image. It resembles the globular clusters in our own Galaxy, but it formed much more recently, about 600 million years ago. Still, NGC 2108 is much older than the Tarantula complex and it is quite possible that in its "youth" it was the core of another giant HII region that has since dissolved into interstellar space.

The images for this release were produced by two ESO astronomers who are impressed by this sky region. Nausicaa Delmotte did the observations for her thesis and notes that: "many of the nebulae and clusters seen in these photos would stand out prominently if they were located elsewhere in the sky and not this close to the core of the spectacular Tarantula complex.". She is echoed by her colleague, Fernando Comeron: "This amazing concentration of clusters, HII regions, supernova remnants, and extremely hot and luminous stars in a single region makes the Tarantula in the LMC a unique celestial object, unrivalled in our own Galaxy and other nearby galaxies!".

[1] The designation "DEM L 299" indicates that this object is no. 299 in the list of nebulae in the Large and Small Magellanic Clouds published in 1976 by astronomers R.D.Davies, K.H.Elliott and J.Meaburn. "N" refers to a list of bright nebulae in these galaxies that was compiled in 1956 by K.G.Henize. "NGC" stands for the "New General Catalogue" published in 1888 by J.L.E. Dreyer.

The present colour photo of the Northeastern outskirts of the Tarantula nebula in the Large Magellanic Cloud is based on three monochromatic images taken on 6 and 7 December 2001 with the Wide-Field-Imager (WFI) at the ESO/MPG 2.2-m telescope, through an U-band filter (with the forbidden emission line of singly-ionised oxygen, [OII], at wavelength 372.7 nm) and two narrow-band filters centred on the wavelengths of the forbidden line of doubly-ionised oxygen ([OIII], at 500.7 nm) and hydrogen (H-alpha line, at 656.2 nm), respectively. Each single-colour image is in turn composed of four individual frames of 20 minutes of exposure time each.

The WFI detector system is composed of eight individual 2k x 4k CCDs with small gaps between them; for this reason, the individual frames in each filter were obtained with the telescope pointing at slightly different positions in the sky, so that the parts of the sky falling in the detector gaps in any given frame are recorded on the others. A problem with one of the detector chips causes double stellar images to appear over a small, narrow strip near the upper left edge of the full field image. The monochromatic images were produced by superimposing the individual frames, correcting for the telescope offsets. Finally, the combined images in each filter were aligned and colour-coded to produce the resulting colour picture. North is up and East is left. The extensive image processing was performed by ESO-astronomers Fernando Comeron and Nausicaa Delmotte. 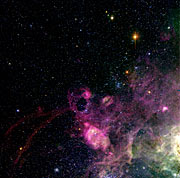 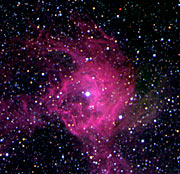 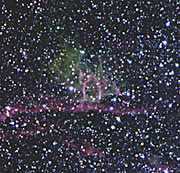 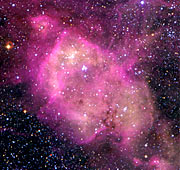 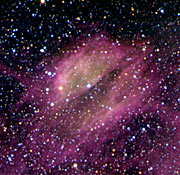 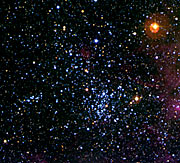 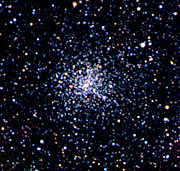 PR Image eso0437h
NGC 2108 stellar cluster in the LMC
Send us your comments!
Subscribe to receive news from ESO in your language
Accelerated by CDN77
Terms & Conditions