Cosmic Forecast: Dark Clouds Will Give Way to Sunshine

Lupus 4, a spider-shaped blob of gas and dust, blots out background stars like a dark cloud on a moonless night in this intriguing new image. Although gloomy for now, dense pockets of material within clouds such as Lupus 4 are where new stars form and where they will later burst into radiant life. The Wide Field Imager on the MPG/ESO 2.2-metre telescope at ESO’s La Silla Observatory in Chile captured this new picture.

Lupus 4 is located about 400 light-years away from Earth, straddling the constellations of Lupus (The Wolf) and Norma (The Carpenter's Square). The cloud is one of several affiliated dark clouds found in a loose star cluster called the Scorpius–Centaurus OB association. An OB association is a relatively young, yet widely dispersed grouping of stars [1]. The stars likely had a common origin in a gigantic cloud of material.

Because the association, and its Lupus clouds, form the closest such grouping to the Sun, they are a prime target for studying how stars grow up together before going their separate ways. The Sun, along with most stars in our galaxy, is thought to have started out in a similar environment.

American astronomer Edward Emerson Barnard is credited with the earliest descriptions of the Lupus dark clouds in the astronomical literature, back in 1927. Lupus 3, neighbour to Lupus 4, is the best studied, thanks to the presence of at least 40 fledgling stars formed over the last three million years, and which are on the cusp of igniting their fusion furnaces (eso1303). The main energy source in these adolescent stars, known as T Tauri stars, is the heat generated by their gravitational contraction. That is in contrast to the fusion of hydrogen and other elements which powers mature stars such as the Sun.

Observations of the cold darkness of Lupus 4 have turned up only a few T Tauri stars. Yet promisingly for Lupus 4 in terms of future star formation is a dense, starless core of material in the cloud. Given a few million years, that core should develop into T Tauri stars. Comparing Lupus 3 and Lupus 4 in this way suggests that the former is older than the latter, because its contents have had more time to develop into stars.

How many stars might eventually start to shine within Lupus 4? It is hard to say, as mass estimates for Lupus 4 vary. Two studies agree on a figure of around 250 times the mass of the Sun, though another, using a different method, arrives at a figure of around 1600 solar masses. Either way, the cloud contains ample material to give rise to plenty of bright new stars. Rather as earthly clouds make way for sunshine, so, too, shall this cosmic dark cloud eventually dissipate and give way to brilliant starlight.

[1] The "OB" refers to the hot, bright, short-lived stars of spectral types O and B that are still shining brilliantly within the widely dispersed cluster as it travels through the Milky Way galaxy. 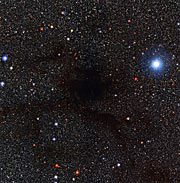 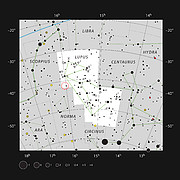 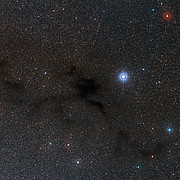 PR Video eso1427a
Zooming in on the dark cloud Lupus 4

PR Video eso1427b
A close-up view of the dark cloud Lupus 4
Send us your comments!
Subscribe to receive news from ESO in your language
Accelerated by CDN77
Terms & Conditions