Moving steadily closer to the Sun, Comet 1995 Q1 (Bradfield) can no longer be observed with the larger telescopes at La Silla. Nevertheless, Guido Pizarro succeeded in obtaining one more image with the ESO Schmidt telescope last evening (21 - 22 August 1995). At the moment of the 10 minute exposure, the comet was only 26 degrees from the Sun. This is most likely to be the last image of this comet that will be made from the ESO observatory.

The reproduction shows the comet head (coma) and the intricate structure of the innermost part of the long, narrow tail that points towards SE, i.e. away from the Sun. This photo was made with an emulsion-filtre combination that registers blue light from the molecules and ions in the coma and tail. The appearance of the tail changes rapidly due to the strong influence of the solar wind at the comet's relatively close location to the Sun, about 75 million kilometres. This corresponds to half the distance between the Earth and the Sun.

Information about the motion of this comet is available on the Astronomical Headlines published by the Central Bureau for Astronomical Telegrams. See also the text, accompanying eso9516a. 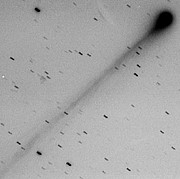